Richmond is a town in New South Wales, in the local government area of the City of Hawkesbury. It is located at a latitude of 33° 35' 54" South and a longitude of 150°45' 04" east, 19 metres above sea level on the alluvial Hawkesbury River flats, at the foot of the Blue Mountains. It is about 65 km by road from Sydney.

The Darug people were the native people to the area in 1788. The area was originally explored by British settlers in 1789 and was known by them as 'Richmond Hill'. This name was given by Governor Phillip, in honour of Charles Lennox, the third Duke of Richmond who was Master General of Ordnance in the Pitt administration. The local area was the third area to have European settlement in Australia after Sydney and Parramatta. The first 22 European settlers came to the area in 1794. They came to farm a total of 30 acres (12 ha) in what is now Pitt Town Bottoms. They needed good farming land to help overcome the desperate need for food in the new colony. By 1799 this region was producing about half the grain produced in the colony.

The Battle of Richmond Hill took place in May and June 1795 between the Darug people and the European settlers. It is perhaps the first time that the colonial authorities sent in the troopers and expressly stated their intent to 'destroy' the whole local Aboriginal population of an area.

Around 1811 Macquarie established the five Macquarie Towns in the area: Windsor, Richmond, Castlereagh, Wilberforce and Pitt Town. One of the early settlers, James Blackman, built Bowman Cottage from brick nog, a common construction technique in the colony, using money borrowed from William Cox. The house was constructed between the years 1815 and 1818. James was unable to pay his debts and was forced to sell the property to George Bowman. The building was restored by the NSW Public Works Department and then became a Division of the Australian Foundation for the Disabled, providing employment for the disabled.

RAAF Base Richmond is a Royal Australian Air Force base at Richmond which was established in 1923. The air base is currently the home to the RAAF's transport squadrons. During the Vietnam War, logistic support and medical evacuations were supplied by the C-130 Hercules aircraft from RAAF Richmond. 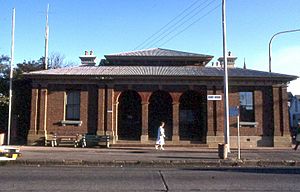 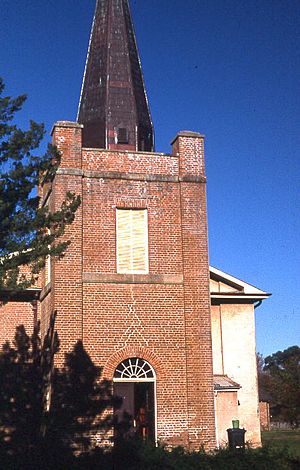 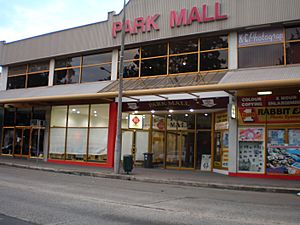 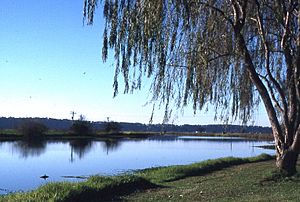 The following buildings are listed on the Register of the National Estate.

The expansion of the Sydney suburban area has almost reached Richmond and it is now considered to be an outer suburb of Sydney. Bells Line of Road which leads into, over and across the Blue Mountains, finishing in Lithgow, starts in Richmond. Richmond railway station is the terminus of the Richmond branch of the North Shore, Northern & Western Line of the Sydney Trains network. Richmond is surrounded by the 329 km2 Richmond Woodlands Important Bird Area, identified as such by BirdLife International because of the importance of the patches of remnant eucalypt woodland it contains for endangered regent honeyeaters and swift parrots.

All content from Kiddle encyclopedia articles (including the article images and facts) can be freely used under Attribution-ShareAlike license, unless stated otherwise. Cite this article:
Richmond, New South Wales Facts for Kids. Kiddle Encyclopedia.