Pitt Town is a historic town and suburb of Sydney, in the state of New South Wales, Australia. Pitt Town is 59 kilometres north-west of the Sydney central business district in the local government area of the City of Hawkesbury. It is bounded in the north by the Hawkesbury River.

Pitt Town is one of the five 'Macquarie Towns' established by Governor Macquarie in 1810. It is named after William Pitt the Younger, the 18th Century British Prime Minister. A site for a village was laid out in 1811 but developed very slowly and was relocated to its present location by 1815. By 1841 there were only 36 houses in the town due to its location being too far from the rich river flats and the consequent long daily trek for farmers to their holdings.

In 1987, the Pitt Town Shopping Centre was constructed with the Bird in Hand Inn being converted to a public inn. For most of the 20th Century, it served as a general store.

1915 marked the 100th anniversary of the re-establishment of Pitt Town and 2015 marks the bicentenary.

During World War II, to cope with the additional volume of aircraft movements at the Richmond Royal Australian Air Force base (RAAF), a second airstrip was built in Pitt Town in what is known today as Airstrip Road. Following the end of the war, the airstrip was abandoned and became an automotive race and testing track for Ferodo Australia.

In 1981, Pitt Town becoming known nationally and internationally as the setting for 'Wandin Valley' in the long-running television series A Country Practice' (1981-1993). The series was broadcast twice weekly on the Australian Television Network Seven Network (ATVN 7).

Pitt Town has many heritage buildings in excellent condition with many recognised as local and stage listed heritage items. 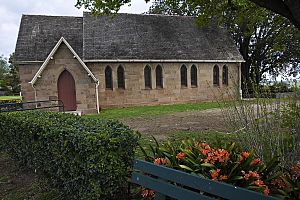 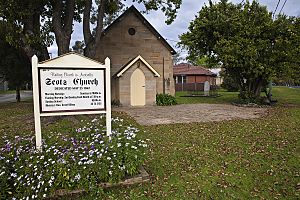 Its population was 1,963 (including Pitt Town Bottoms) at the 2011 census. Pitt Town's population is growing due to the Vermont Development that began in 2007.

The television drama series A Country Practice used this village for many external scenes. The heritage house opposite Pitt Town Public School was used as the home of characters Frank and Shirley Gilroy (Brian Wenzel and Lorrae Desmond). The Hardware Store on the corner of Bathurst, Eldon and Grenville Streets was known as 'Muldoon's Store', the Bird in Hand Inn was known as the 'Wandin Valley General Store'. Other buildings used include a number of private residential dwellings along Bathust Street for Matron Maggie Sloan (Joan Sydney) and Esme Watson (Joyce Jacobs). The television series used a good number of other well known buildings in the Hawkesbury area. Including the hospital (located in Oakville), the doctor's surgery (located in Windsor) Burrigan High School (Windsor High School), Burrigan Swimming Pool (the former Hornsby Aquatic Centre - demolished 2012). When ACP was relaunched on rival Network Ten in 1994, filming at moved to Emerald, Victoria

All content from Kiddle encyclopedia articles (including the article images and facts) can be freely used under Attribution-ShareAlike license, unless stated otherwise. Cite this article:
Pitt Town, New South Wales Facts for Kids. Kiddle Encyclopedia.