Windsor is a historic town north-west of Sydney, New South Wales, Australia. It is in the Hawkesbury local government area. The town sits on the Hawkesbury River, enveloped by farmland and Australian bush. Many of the oldest surviving European buildings in Australia are located at Windsor. It is 46 kilometres (29 mi) north-west of metropolitan Sydney, on the fringes of urban sprawl.

Windsor is the third-oldest place of British settlement on the Australian continent. Settlement at the location was first established about 1791, near the head of navigation on the Hawkesbury River (known as Deerubbin in Dharuk) and taking advantage of the fertile river flats for agriculture. The area was originally called Green Hills, but renamed Windsor (after Windsor in England). The town was officially proclaimed in a Government and General Order issued from Government House, Sydney, dated 15 December 1810, Governor Lachlan Macquarie having "marked out the district of Green Hills", which he "... called Windsor", after Windsor-on-the-Thames.

While in Windsor, Macquarie ordered the main institutions of organised settlement to be erected, such as a church, school-house, gaol and "commodious inn" (The Macquarie Arms). Of these new buildings, the most outstanding was Francis Greenway's Saint Matthew's Anglican Church, for which Macquarie himself chose the site. Samuel Marsden, principal chaplain of the colony, consecrated the church on 8 December 1822.

In 1813 a report was given to Governor Macquarie from Earl Bathurst detailing a proposed invasion of the Hawkesbury River by France. This planned invasion that did not eventuate, targeted the Windsor granary in order to cut off supply to Sydney, showing the relative importance of this new settlement on a global scale.

Windsor is approximately 60 kilometres north-west of Sydney, and the location was chosen because of the agricultural potential of the area and the location was accessible by coastal shipping from Sydney. It was known as the "bread basket", ensuring the survival of the starving colony. The extensive agriculture caused major silting in the Hawkesbury River, by the 1890s the river had become so blocked with silt, ships could not travel up to Windsor from the coast. By then the railway, in 1864, and the road, in 1814, had been built.

On 1 January 1803 Daniel Egan was born in Windsor. He went on to become Mayor of Sydney in 1853. Many of the oldest surviving European buildings in Australia are located at Windsor.

The following buildings are listed on the Register of the National Estate. 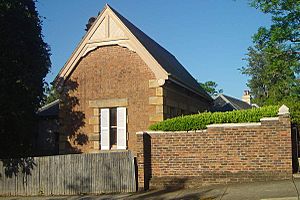 The Sanctum at Sunny Brae 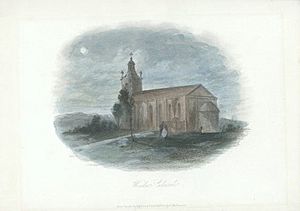 Floods are a major concern in Windsor. Its proximity to the Hawkesbury River has resulted in numerous disastrous floods. A horseshoe on the outside wall of the Macquarie Arms pub marks the level the flood peaked at in 1867, when beaches along the Hawkesbury to Barrenjoey were littered with the debris from the town.

The spread of the suburbs of metropolitan Sydney has almost reached Windsor, and the town is now regarded as an outer suburb, though still retaining its appeal as a small country town. Windsor railway station (opened 1 December 1864), is on the Richmond branch of the North Shore, Northern & Western Line of the Sydney Trains network.

Located in the town centre is the Windsor Bridge which was constructed in 1874. It is the oldest existing crossing of the Hawkesbury River. There was a proposal in 2013 by the Government of New South Wales to demolish the existing bridge and replace it with a safer bridge. Local reactions have been negative. It was suggested by the political activist group Community Action for Windsor Bridge (CAWB) that a bypass is a better option to preserve history, ensure safety, and better manage the congestion of Windsor Road. Nevertheless, no bridge or bypass has been constructed.

Windsor is connected to Parramatta via the 31-kilometre-long (19 mi) Windsor Road cycleway, with much of its route via the North-West T-way.

All content from Kiddle encyclopedia articles (including the article images and facts) can be freely used under Attribution-ShareAlike license, unless stated otherwise. Cite this article:
Windsor, New South Wales Facts for Kids. Kiddle Encyclopedia.