The North-West T-way is a continuous series of bus-only lanes and bus roadways between Parramatta, Blacktown and Rouse Hill in Western Sydney. Opened in stages between March and November 2007, the 24 km (14.9 mi) T-way was the second bus rapid transit route to be built in Sydney after the Liverpool-Parramatta T-way. 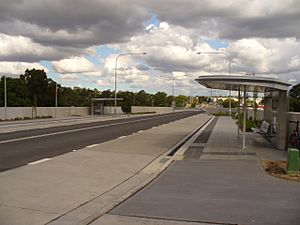 The T-way was a joint venture between the NSW Ministry of Transport and the NSW Roads and Traffic Authority. The A$330 million contract to design, built and maintain until 2017 was awarded to Leighton Contractors in 2005.

The project was approved in February 2004 and construction began in mid-2005. Construction was expected to take just over two years and cost $524 million. According to a report in The Sydney Morning Herald, many of the costly design mistakes made in the development of the Liverpool-Parramatta T-way have been avoided on the North-West T-way.

The T-way and its operations has come under criticism in several areas. Even before its opening, the Roads and Traffic Authority was criticised for its lack of planning and broken promises on the T-way's construction. Parramatta Council complained during construction that noise walls had not been built next to the homes of residents who lived along the T-way route, causing them distress. The planned cycleway alongside the T-way was not built in its entire length, and included a large deviation which Council complained would erode the cycleway's effectiveness. After the opening of the first stage of the T-way, a local cycle advocacy group identified a large gap in the cycleway, potentially compromising cyclists' safety. Some local residents had their backyards destroyed.

On the opening of the initial route several other problems were raised. Comments were made concerning the initial patronage of the T-way. While the New South Wales State Government refused to say how many people used the T-way in its first week, a local newspaper discovered that the commuter carpark attracted as few as ten cars a day in the first week of operation. Another local newspaper reported a traffic barrier separating vehicles from the busway at Westmead railway station was causing accidents.

On 12 April 2007, the Roads and Traffic Authority quietly scrapped the bus priority system that would have given buses priority at all at-grade intersections. The decision was criticised as eliminating the main advantage of the T-way and not entice commuters back to public transport. Bus operators expected better patronage once the toll on the Lane Cove Tunnel came into effect.

There have also been many complaints regarding city bus travellers from Rouse Hill and Kellyville Ridge as their trips were taking 1.5 hours and were overcrowded. Hillsbus had seen increased patronage on city services with the new timetable and is not able to cope with the demand.

Private bus operators Busways and Hillsbus operate North-West T-way services. There are many services which traverse the T-Way, either in its entirety or a section of it. The route numbering follows the Sydney Metropolitan Bus Route Numbering System.

The following services use the Parramatta - Rouse Hill T-Way 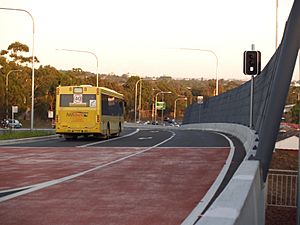 The following services use the Blacktown - Parklea T-Way

All content from Kiddle encyclopedia articles (including the article images and facts) can be freely used under Attribution-ShareAlike license, unless stated otherwise. Cite this article:
North-West T-way Facts for Kids. Kiddle Encyclopedia.