Kids Encyclopedia Facts
This page is about the railway project. For the associated passenger rail line that was built, see Metro North West Line.

Sydney Metro Northwest was a rapid transit project involving the construction of a rail line through the north-western suburbs of Sydney, New South Wales, Australia. The line included the conversion of the existing Epping to Chatswood Rail Link to metro standards and connects the suburbs of Rouse Hill and Chatswood via Castle Hill and Epping. The project was managed by Transport for NSW through its Sydney Metro agency and opened to service on 26 May 2019 as the Metro North West Line. 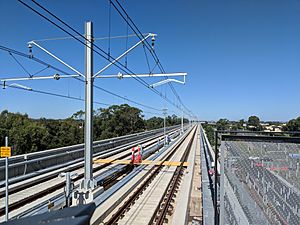 A new train stabling yard was constructed at Tallawong Road in Rouse Hill, with room for 16 train sets. 3,000 new parking spaces are provided across proposed carparks at Cherrybrook, Hills Showground and Kellyville stations.

The entire line is electrified via overhead catenary at 7003150000000000000♠1,500 V DC to power the metro trains. The viaduct and ground level section between Tallawong and Bella Vista uses standard overhead wires to supply power. For the underground section between Bella Vista and Epping, an rigid overhead conductor system is used instead of wires. For the rest of the line (formerly part of the Epping to Chatswood rail link [ECRL]), the existing sagged catenary overhead wires were retained, with an additional copper cable added in some sections due to the increased current draw of the new rolling stock.

There are crossovers at several stations on the line to terminate trains. These are located at Tallawong, Bella Vista, Castle Hill and Chatswood. All crossovers on the ECRL (Lady Game Maintenance Facility and Macquarie Park) were kept, as well as the connection to the surface at Epping. This was kept in case access was required for trackwork vehicles to enter the line, but it has not been used yet. The link to the surface is unwired and there are obstructions placed on the rails.

The line is also equipped with the latest technology for boosting cellular/4G signals. Users of the line have reported extremely stable and fast 4G connections while travelling on this line. Several news channels have also done live crosses via 4G to reporters riding on the line.

The system is designed to operate at a maximum 4-minute headway (15 tph) with 6-car sets in peak on opening day, with design allowance for possible augmentation up to 2.4-minute (25 tph) with 8-car sets in the future. 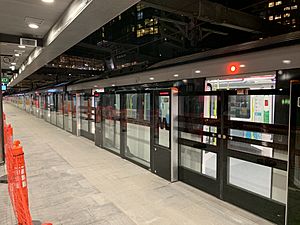 The line is equipped with Alstom Urbalis 400 moving block CBTC signalling system with ATC under ATO Grade of Automation 4 (UTO), and has subsystems of automatic train protection (ATP), Iconis automatic train supervision (ATS) and Smartlock computer-based interlocking (CBI). There are no physical signals on the track connected to this system. The only physical signals on the track display the status of nearby points, showing a white line pointing towards the direction the points are set, or a red horizontal line to indicate stop. As the signals are merely points indicators, they do not know the position of the next train and will still show a white line even when there is a train up ahead. The location of the next train, along with other information for self-driving, is directly sent to the train through a 5 GHz communications system.

The Metro North West Line stations all have platform screen doors installed to ensure safety. The PSDs themselves were supplied by Faiveley Transport, and the glass on the PSDs was supplied by Qingdao Jinjing Glass Co., Ltd.

All content from Kiddle encyclopedia articles (including the article images and facts) can be freely used under Attribution-ShareAlike license, unless stated otherwise. Cite this article:
Sydney Metro Northwest Facts for Kids. Kiddle Encyclopedia.