Following victory in the 2011 New South Wales election, the O'Farrell Government embarked on reform of transport in New South Wales. In November 2011, a new organisation, Transport for NSW, was created to improve planning and coordination of transport projects and services. The organisation developed a new rail timetable and branding, which was put into effect on 20 October 2013. This saw the merger of the North Shore Line and Western Line (Berowra - City via Gordon then to Emu Plains or Richmond via Strathfield) with the Northern Line (Hornsby - City via Macquarie Park then to Epping via Strathfield). A new numbering system was also introduced and the line was given the number T1. 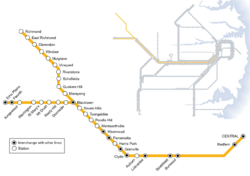 The Main Western line opened to Penrith in 1863 as a branch from the junction with the Main South line at Granville. Electrification reached Parramatta in 1928 and Penrith in 1955.

A branch line was opened to Richmond in 1864 under the stewardship of engineer James Moore. Electrification from Riverstone to Richmond opened in August 1991. Through running to and from Sydney commenced in 1992.

Trains from the Main Western and Richmond lines run as the Western Line. 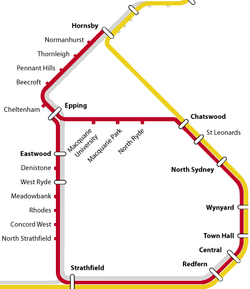 Diagram of the Northern Line (in red) and North Shore and Western Lines (yellow) between 2009 and 2013.
For more details, see North Shore line 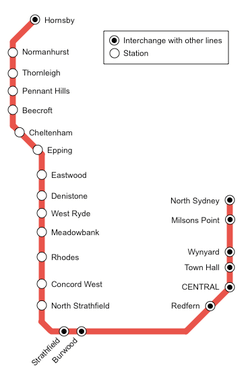 The traditional Northern Line was the suburban portion of the Main Northern line which opened in 1886 and was electrified in 1926. When the Sydney Harbour Bridge was opened, the Northern Line was connected to the City underground and the North Shore line.

In 2009 the Epping to Chatswood line was opened. The traditional Northern line route ran from Hornsby to North Sydney via Strathfield and the City. When the Epping to Chatswood Line opened, the Northern Line was split in two, with trains from north of Epping operating via the new link, approaching the city via the North Shore Line and rejoining the traditional route before terminating at Epping. The Northern Line was colour coded red prior to being merged with the North Shore and Western lines. After merging, the Northern Line loop was split on weekdays, with trains from the upper Northern Line continuing to Richmond or Emu Plains.

In 2018 the Epping to Chatwood line will be closed and be converted to a metro. As a result, the traditional Northern line route from Hornsby to Central via Strathfield will be reinstated with expanded train services on the North Shore line. This will coincide the proposed new timetable that year.