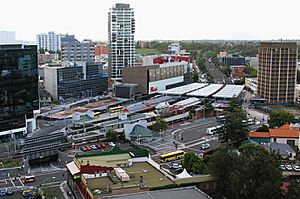 Aerial view of the station in 2007 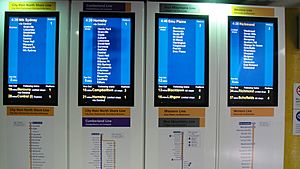 Prior to the Main Western line being quadrupled from Granville to Westmead in 1985, the station consisted of four platforms, platforms 3 and 4 on the main line and 1 and 2 on a loop.

In 1985, the station was refurbished with a new underground subway bus interchange built at the station's north-east side.

In late 2003, work began on a new transport interchange which linked the station to the neighbouring Westfield Parramatta shopping centre. The works included upgrading the station, providing more access to commuters, and constructing a new bus interchange. On 19 February 2006 the interchange was opened.

In October 2016, the Parramatta Turnback Project was completed, adding crossovers to allow trains to terminate on platforms 3-4 in either direction.

Parramatta metro station will be located around a block to the north of the current station and is planned to open in the late 2020s.

Parramatta station has a large bus interchange located on the west side of the station between platform 4 and Westfield Parramatta. It serves a large number of routes operated by State Transit, Transit Systems Sydney, Hillsbus and Transdev NSW.

Route 535 operates from Valentine Avenue as a shuttle service to Carlingford while the Parramatta Light Rail is constructed. This routes stops at all the former stations along the former Carlingford Line except Rosehill Station.

As part of the Parramatta Turnback project, an additional crossover from the Up Main to the Down Main was constructed (not shown) west of the station.

All content from Kiddle encyclopedia articles (including the article images and facts) can be freely used under Attribution-ShareAlike license, unless stated otherwise. Cite this article:
Parramatta railway station Facts for Kids. Kiddle Encyclopedia.