Epping is a suburb of Sydney, in the Australian state of New South Wales, 18 kilometres north-west of the Sydney central business district in the local government area of the City of Parramatta. Epping is located in the Northern Sydney region, which is sometimes simply referred to as the “North-West” or North Shore. The suburb is the most north-eastern area of the City of Parramatta. North Epping is a separate suburb to the north and under a different council, Hornsby Shire.

The Wallumedegal Aboriginal tribe lived in the area between the Lane Cove River and Parramatta River. In 1792, Governor Phillip began the granting of parcels of lands to marines, and the area was referred to on Phillip's maps as the Field of Mars, Mars being the Roman god of War. It contained the area of what is now Epping, along with the surrounding suburbs of Ryde and Marsfield.

In 1899 the suburb name of Epping was adopted following the suggestion by a local landowner William Midson (1849–1924), after a town near Epping Forest in Essex, where his father was born. At this time, the names of the Post Office and the railway station were both changed to Epping.

The Seven Network had television production studios in Epping until 2009. The site is now occupied by residential apartments. 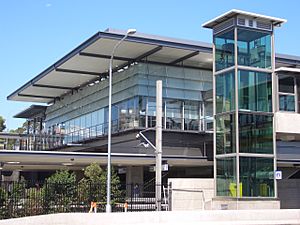 Epping railway station is a junction station on the Northern Line of the Sydney Trains network, the Central Coast & Newcastle Line of the NSW TrainLink network, and the new rapid transit Sydney Metro Northwest since its opening on 26 May 2019.

Bus services are operated by Busways and Hillsbus. The M2 Hills Motorway runs along the northern border to the Sydney CBD. Epping Road is a major arterial road in the area that runs east from the railway station to the Pacific Highway.

In spite of the range of public transport options, the 2016 census found that only 37% of employed people travelled to work on public transport, compared to 51% who travelled by car (either as driver or as passenger). 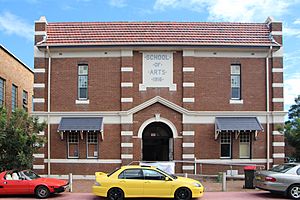 Epping Community Centre, originally known as the School of Arts

Epping is well served with community facilities, provided by the councils or other organizations. These include:

Some schools and churches also have halls and other facilities that can be made available for community uses. 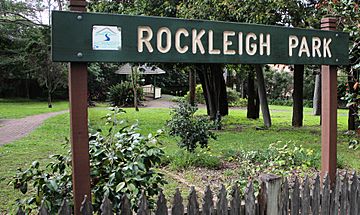 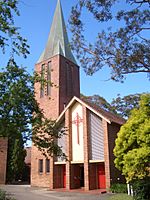 Formerly the American International School of Sydney was located here.

Epping is also known to be a more affluent suburb in its region, as evidenced by its higher median house prices compared to neighbouring suburbs, and the high proportion of professionals (39.7%) who reside in Epping (nearly double the Sydney average of 21.3%). Average weekly household income was $1,683, compared to the national average of $1,234.

More than three-quarters (76.8%) of private dwellings were family households, 19.3% were single person households and 4.0% were group households. Stand-alone houses accounted for 62.6% of dwellings, while 27.9% were flats, units or apartments and 9.3% were semi-detached. The average household size was 2.8 people.

All content from Kiddle encyclopedia articles (including the article images and facts) can be freely used under Attribution-ShareAlike license, unless stated otherwise. Cite this article:
Epping, New South Wales Facts for Kids. Kiddle Encyclopedia.