Division of Bennelong facts for kids 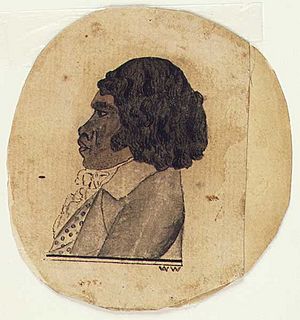 The Division of Bennelong is an Australian electorate in New South Wales. The division was set up in 1949. It is named for Bennelong, an Indigenous Australian man who became a friend of the first Governor of New South Wales, Arthur Phillip. Bennelong includes the suburbs of Eastwood, Carlingford, Epping and Ryde.

When the Division of Bennelong was created in 1949, it covered mainly the suburbs of Ryde, Hunters Hill and Lane Cove. These were (and still are) richer areas, and Bennelong was a "safe" Liberal seat.

Over the years Bennelong has changed into a marginal seat for two reasons. Firstly, the electoral boundary of Bennelong has been changed many times, where it has moved west into Labor voting areas. Rich suburbs like Lane Cove and Hunters Hill in the east are no longer included. The division now includes Eastwood, Epping, Carlingford and working class Ermington in the north and west. Secondly, the type of people living in the division has changed. Since the early 1990s, there has been an increase in migrants from China, Hong Kong, South Korea and India. These are wealthy and conservative people who would support the Liberal Party, but they have not like the Liberal policies on immigration and multiculturalism. 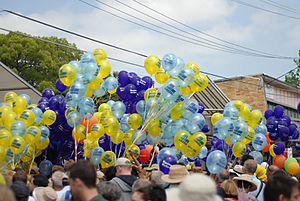 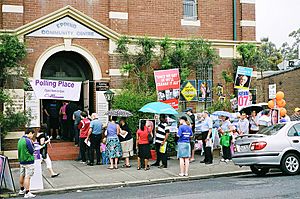 An Epping polling booth within Bennelong.

In the Australian federal 2007 election, the Member for Bennelong, and Prime Minister John Howard, lost the seat to Labor candidate Maxine McKew, after holding it for 33 years. This was only the second time in Australian history that a Prime Minister had lost his own seat in Parliament. The first was Stanley Bruce in 1929.

Bennelong was held by the John Howard, the second longest serving Prime Minister of Australia. In 2010 the seat was won by former tennis star, John Alexander.

All content from Kiddle encyclopedia articles (including the article images and facts) can be freely used under Attribution-ShareAlike license, unless stated otherwise. Cite this article:
Division of Bennelong Facts for Kids. Kiddle Encyclopedia.