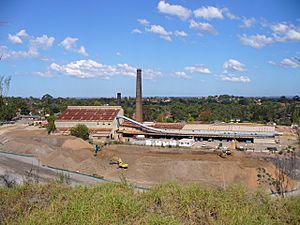 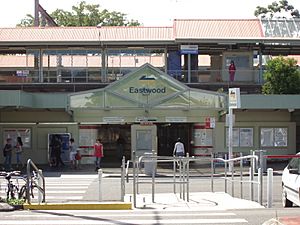 Eastwood Station prior to its 2007 reconstruction

Eastwood is a suburb of Sydney, Australia. Eastwood is located 17 kilometres north-west of the Sydney central business district in the local government areas of the City of Ryde and the City of Parramatta. Eastwood is in the Northern Sydney region.

Originally thought to have been inhabited by the Wallumedegal Aboriginal tribe, who lived in the area between the Lane Cove and Parramatta Rivers, the area was first settled by Europeans shortly after the arrival of the First Fleet in 1788, from land grants to Royal Marines and NSW Corps, and was named "Eastwood" by an early Irish free settler, William Rutledge. Today it is a large suburban centre in the north of Sydney of over 17,000 people, with a large shopping area. Eastwood has a large population of Asian descent with immigrants from China and South Korea transforming the commercial precinct in the past decade.

Eastwood is famous for the Granny Smith apple, accidentally first grown in the suburb by Maria Ann Smith. Every October, the oval and cordoned-off streets become the grounds for the annual Granny Smith Festival, a celebration of the icon with fairground rides, market stalls, street theatres, parades, an apple-baking competition and a fireworks spectacular at the Upper Eastwood Oval. In recent years the festival has been influenced by the substantial Asian immigrant communities, with Chinese dragon dancers in the Grand Parade and Chinese stallholders. During the same period, Eastwood's annual Chinese New Year Celebrations have broadened their appeal by incorporating concurrent Korean New Year traditions, and have accordingly been renamed the Lunar New Year Festivities.

Eastwood is located at the edge of the Hornsby Plateau with the suburbs of Dundas Valley and Denistone on its western and southern sides, respectively, as the land falls away down to the Cumberland Plain. To the north, Eastwood is bounded by the transport hub of Epping and to its east Marsfield which shares the same postcode of 2122. The suburb is predominantly residential with the main shopping area of Eastwood centred between Rowe Street and Rutledge Street around the railway line.

The Wallumedegal aboriginal tribe lived in the area between the Lane Cove River and Parramatta River, which was known as Walumetta. The area was originally heavily timbered.

The area was first settled by Europeans shortly after the arrival of the First Fleet in 1788 and was part of the Field of Mars. The area of Eastwood was originally granted between the years of 1790 and 1803 to marines and the NSW Corps. John Love, a private was granted 90 acres (36 ha) here in 1794, described as North Brush, in the Field of Mars Common. The land was then acquired by William Kent who already held land in what is now Epping. The land was purchased by William Rutledge for 288 pounds in 1835, who built 'Eastwood House' in 1840. This house is now part of Marist College Eastwood. In 1863 Edward Terry purchased the estate and upon his death in 1905, the estate was sub-divided.

In 1886, the railway line from Strathfield to Hornsby was opened, with a station here originally called Dundas. This was changed a year later to Eastwood, named after the Eastwood Estate.

The commercial centre underwent a major upgrade in the early 1980s. Rowe Street, which originally ran across the railway line through a level crossing was turned into a mall between The Avenue and West Parade, and the 1940s bridge built in First Avenue for crossing traffic was replaced with a six-lane bridge. This bridge was to service the planned County of Cumberland Scheme, Eastwood County Road (linking Eastwood with Macquarie Park), a road project in the local area which has been controversial among locals.

Eastwood is relatively well served by public transport. Eastwood railway station is located on the Main Northern railway line. The station opened in 1886, and it takes approximately 30–35 minutes to travel to Central. Intercity services also service Eastwood station between Central, Newcastle and the Central Coast region.

Numerous Busways bus services also operate from the small interchange outside the station. These include the 545/550 route between Parramatta and Macquarie Park, the 544 route between Auburn and Macquarie University, and the 515/X15 service to the Sydney central business district. Eastwood is also served well by roads, and is located close to the trunk routes of the A6 (Marsden Road), and Victoria Road.

In spite of the range of public transport options, the 2016 census found that only 31% of employed people travelled to work on public transport and 53% by car (either as driver or as passenger). 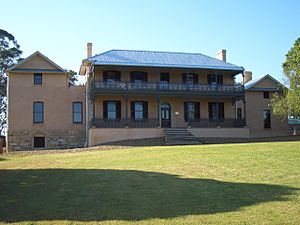 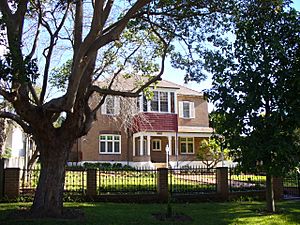 "Ripley", c.1888, a mansion typical of some of the early estate homes in the area. 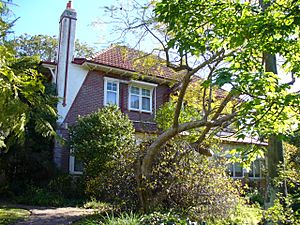 "Heatherwold" was a former girls' school, Braemar College, in Eastwood.

Eastwood once featured a lake which gave the names Lakeside Road and The Lakeside Road Uniting Church. This lake was later converted to an oval which is used for soccer matches and by local schools. Unfortunately, the oval does still occasionally flood after very heavy rainfall.

Darvall Park and Brush Farm Park are examples of remnant forest areas in the Eastwood district. Volunteers and professional bush regenerators have worked to preserve the blue gum high forest and rainforest in these areas. The largest tree heath known in existence occurs at Brush Farm park. Other notable plants include mative crabapple, jackwood and red olive berry. Despite being within a large city, Brush Farm has remarkable fauna, including the powerful owl, emerald dove, eastern whipbird, satin bowerbird and the green tree snake. 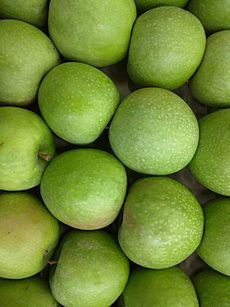 Eastwood is home to the first Granny Smith apple and holds a commemorative festival every October.

Eastwood is well known as the place where the Granny Smith apple was first grown. This is celebrated each October with the Granny Smith Festival which attracts over 60,000 people each year.

Today it is a large suburban centre in the north of Sydney with over 16,000 residents. Over the past few decades Eastwood has become increasingly multicultural. Migrants from southern Europe countries such as Italy and Greece began settling here and at Carlingford from the 1960s. From the early eighties to the late nineties, many Chinese and Koreans settled in the area.

All content from Kiddle encyclopedia articles (including the article images and facts) can be freely used under Attribution-ShareAlike license, unless stated otherwise. Cite this article:
Eastwood, New South Wales Facts for Kids. Kiddle Encyclopedia.