The suburb's name is derived from Field of Mars, the original name in the early days of British colonisation of Australia, given to the area by Governor Phillip in 1792 .

The whole area between the Parramatta and Lane Cove Rivers was originally known by its Aboriginal name Wallumatta. The aboriginal name survives in a local park, the Wallumatta Nature Reserve, located at the corner of Twin and Cressy Roads, North Ryde.

In 1792 Governor Phillip began the granting of parcels of lands to Royal Marines, and the area was referred to on Phillip's maps as the Field of Mars, named after the Roman Field of Mars probably because of the military link. The area was later part of the suburb of North Ryde, and many consider that Marsfield is still a part of the greater North Ryde area. Field of Mars was also the name for the parish proclaimed in 1835.

In 1874, following extensive debate including a Parliamentary Select Committee, the government resumed the Common for sale and settlement by small farmers, using the money to fund bridges across the Parramatta River at Gladesville and Iron Cove. The land was subdivided into small farms of between 0.4 and 1.6 ha (1–4 acres), and released for sale in stages, starting in 1885.

In 1894, the "Municipality of Marsfield" formed its own local government, splitting from Ryde Municipality.

Stately, historical Curzon Hall was built in the 1890s by Harry Smith and named after his wife Isabella Curzon-Smith. The house was bought in 1921 by the Society of Saint Vincent de Paul which established St Joseph's Seminary on the premises. It now serves as a function centre.

Until the 1950s, substantial parts of the North Ryde/Marsfield area were part of the "Green Belt" which prevented building houses on lots of less than 2 ha (5 acres). The Marsfield-North Ryde Green Belt boundaries were revised and in December 1959, 688 ha (1,700 acres) of land was rezoned. The last Green Belt land was released in September 1969 to build Macquarie Shopping Centre and Macquarie University. 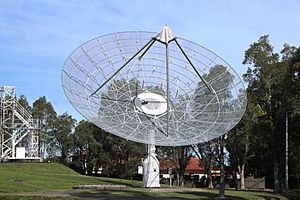 The larger of two radio dishes at the Marsfield headquarters of the CSIRO Department of Radio Physics.

Marsfield is home to:

A number of bus routes service Marsfield. The 292/293 routes run from the city through Lane Cove and terminate in Busaco Road while other many routes e.g. 288/290 travel along Epping Road to Epping station. Macquarie University railway station is located on Herring Road between the university and Macquarie shopping centre. 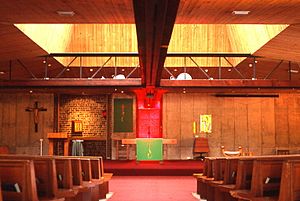 All content from Kiddle encyclopedia articles (including the article images and facts) can be freely used under Attribution-ShareAlike license, unless stated otherwise. Cite this article:
Marsfield, New South Wales Facts for Kids. Kiddle Encyclopedia.