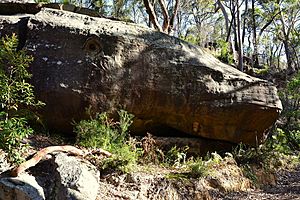 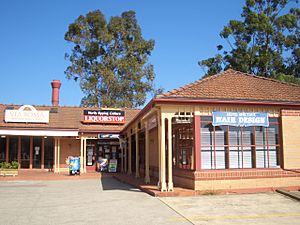 North Epping is a suburb of Sydney, in the state of New South Wales, Australia 19 kilometres north-west of the Sydney central business district in the local government area of Hornsby Shire. North Epping is in the Northern Suburbs region. Epping is a separate suburb to the south, which shares the postcode of 2121.

North Epping is a leafy suburb, surrounded by bushland of the upper section of Lane Cove National Park. There are many walking trails, including the Great North Walk. One of the well known landmarks is Whale Rock.

The Wallumedegal Aboriginal tribe lived in the area between the Lane Cove River and Parramatta River, which was known as Walumetta.

In 1792 Governor Phillip began the granting of parcels of lands to marines, and the area was referred to on Phillip's maps as the Field of Mars, named after the Roman Field of Mars probably because of the military link. It contained the area of what is now Epping and North Epping. The name Epping is derived from Epping Forest in Essex, England.

North Epping was split off from Epping as a separate suburb on 1 December 1995.

The M2 Hills Motorway runs along the southern border to the Sydney CBD. North Epping is connected to adjacent Epping by a single road, Norfolk Road. Norfolk Road runs south towards Epping Road, a major arterial road in the area that runs east to the Pacific Highway. Almost all areas of the suburb are serviced by Sydney Buses route 295 (Macquarie Centre to North Epping). The route is a loop and only goes clockwise around the edge of the suburb- the only place where it runs in both directions is Norfolk road south of Grayson street, towards Epping railway station.

All content from Kiddle encyclopedia articles (including the article images and facts) can be freely used under Attribution-ShareAlike license, unless stated otherwise. Cite this article:
North Epping, New South Wales Facts for Kids. Kiddle Encyclopedia.