Cheltenham is a suburb in the Northern Sydney region of Sydney, in the state of New South Wales, Australia. Cheltenham is 18 kilometres north-west of the Sydney central business district in the local government area of Hornsby Shire.

Cheltenham is a small residential suburb with a distinctive English atmosphere, characterised by a number of 19th century mansions on tree-lined streets. Cheltenham shares its postcode of 2119 with Beecroft and has sometimes been viewed as part of the suburb. Most residents of Cheltenham see themselves as distinct from Beecroft, although local issues are addressed together in the Beecroft Cheltenham Civic Trust. 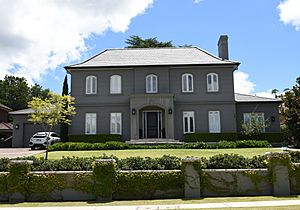 Cheltenham takes its name from a house built by William Chorley, a Sydney tailor and men’s outfitter, who acquired the land when it was released from the Field of Mars Reserve. He named the house after his birthplace of Cheltenham, Gloucestershire, England. Chorley asked the government to build a station here and to name it after his property when it opened in 1898. Sutherland Road was named for John Sutherland, Minister for Public Works from 1887to 1889.

According to the 2011 census, there were 2,067 residents in Cheltenham. 70% or residents were born in Australia; the most common ancestries in Cheltenham were English 26.4%, Australian 23.0%, Chinese 9.9%, Irish 8.4% and Scottish 8.0%. The median age was 43 years, six years older than the national median of 37. Children aged under 15 made up 18.5% of the population and people aged 65 and over made up 15.5% of the population. The median weekly household income in Cheltenham was $2,568, more than double the national median weekly income of $1,234. The most common religious affiliation was "No Religion".

Cheltenham railway station is on the Northern Line of the Sydney Trains network. It is one of the few stations with no surrounding business district, due to William Chorley placing covenants on the surrounding land.

The M2 Hills Motorway runs along the southern border of the suburb. For many years, Sutherland Road ran through both Beecroft and Cheltenham, and acted as a short cut between Beecroft Road and Epping Road. This road ran to the east of the Railway line and, during peak hour, was quite busy. With the opening of the M2 Hills Motorway in 1997, Sutherland Road was closed at the Devlins Creek bridge - where the M2 enters a tunnel under North Epping. The result of this closure is that the areas east of the railway line are now very quiet and the house values have benefitted.

Ahimsa (an Indian word meaning non-violence) is the name of a bush retreat located in Cobran Road. It was originally the home of the environmentalist Marie Byles, who died in the house in 1979. It can be accessed at the rear of Day Road and Cobran Road (both roads are cul-de-sacs). The site is administered by the National Trust of Australia. The house is leased privately but the bush area is open to the public within certain restrictions.

All content from Kiddle encyclopedia articles (including the article images and facts) can be freely used under Attribution-ShareAlike license, unless stated otherwise. Cite this article:
Cheltenham, New South Wales Facts for Kids. Kiddle Encyclopedia.