Pennant Hills is a suburb in the Northern Suburbs of Sydney, New South Wales, Australia. Pennant Hills is located 25 kilometres north of the Sydney central business district in the local government area of Hornsby Shire.

The area was first explored by Governor Arthur Phillip shortly after 15 April 1788. It was noted that the party saw 'fine views of the mountains inland' (the Blue Mountains). Governor Phillip 'did not doubt that a large river would be found' nearby.

The first white settlement occurred in the area with the establishment of convict timber camps in the time of Governor Lachlan Macquarie. Permanent white settlement of Pennant Hills began only in the 1840s and took off with the arrival of the Northern railway line in the 1880s. In August 1912 the federal government opened a Wireless Telegraphy Station, the first of its kind on a national level. The suburb has grown considerably since the 1950s, when the motor car became commonplace.

There are two theories about the origin of the suburb's name. One is that the name comes from a hill where a pennant was flown as a signal during the early days of New South Wales. However, though such signals were certainly used, there is no evidence that such a pennant was ever flown at what is now Pennant Hills, but in the early 19th century the name applied to the whole ridge down as far as Mobbs Hill, which has a Telegraph Road to commemorate the signalling station. Also, references to the suburb of Pennant Hills were written 20 years before the establishment of pennant stations (Patrick 1994:79-80). Elizabeth MacArthur records receiving a flag signal at Parramatta that her husband John had returned from England in 1806. The other theory says that Pennant Hills was named after an 18th Century botanist, Thomas Pennant (Patrick 1994:79-80), though there is no contemporary evidence for this either. The fact that the area was first referred to as "Pendant Hills" in the Sydney Gazette when first published in 1803 makes this theory unlikely, as there was no Thomas Pendant either.

During the 1960s and 1970s, Pennant Hills was the site of Chelmsford Private Hospital, where the unorthodox psychiatric Deep Sleep Therapy conducted by Dr Harry Bailey resulted in the deaths of dozens of patients. 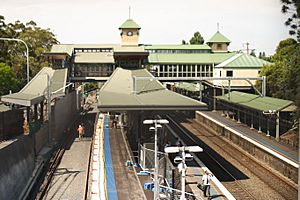 Pennant Hills train station on 10 December 2015, showing construction of the third track as part of the Northern Sydney Freight Corridor.

Pennant Hills Road is one of Sydney's major thoroughfares. Bus services by Transdev NSW and Hillsbus have their terminus in Pennant Hills and run to West Pennant Hills, Castle Hill and Cherrybrook.

Pennant Hills is surrounded on two sides by large swathes of bushland. To the east, the suburb is bordered by the upper reaches of the Lane Cove River and its associated national park, whilst in the north-west, Pennant Hills borders Berowra Valley National Park. Both of these reserves contain extensive walking tracks within the boundaries of the suburb, with some linking to the Great North Walk.

The Lilian Fraser Garden is also located in Pennant Hills. Originally maintained for many years by the noted government biologist Dr Lilian Fraser, after her death in 1987 her collection of rare and exotic plants was passed on to Hornsby Shire Council. Open free of charge to the public for viewing, the garden can also be hired for special events for a fee.

Pennant Hills is also home to the Baden Powell Scout Centre, which borders the Lane Cove National Park. Opened in 1929, it initially served as a permanent camp for the unemployed during the Great Depression, and was visited by the Lord Baden-Powell himself in 1931. Situated on 36 acres of bushland, the centre is now home to the John Hill training centre and provides accommodation, catering and conference facilities for large groups, as well as activities such as high-ropes and rock climbing for camps.

Because of its elevation, Pennant Hills has a mean of 21.8 °C (71.2 °F) in the warmest month, which is just below the subtropical isotherm of 22 °C (72 °F). As such, the Pennant Hills area, like most of the Hills District suburbs, have an Oceanic climate (Cfb). Its highs are around two degrees warmer than Sydney CBD in the summer, and a degree cooler in the winter. Whilst the rainfall is evenly distributed, the wettest month is March and the driest is September.

All content from Kiddle encyclopedia articles (including the article images and facts) can be freely used under Attribution-ShareAlike license, unless stated otherwise. Cite this article:
Pennant Hills, New South Wales Facts for Kids. Kiddle Encyclopedia.