Division of Berowra facts for kids 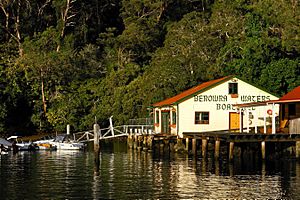 The Division of Berowra is an Australian Electoral Division in New South Wales. It was created in 1969 and is named for the suburb of Berowra. It includes all or parts of the suburbs of Arcadia, Berowra, Brooklyn, Cheltenham, Cherrybrook, Cowan, Dangar Island, Galston, Glenorie, Maroota, Hornsby and Pennant Hills.

Philip Ruddock, was first elected to the Parliament in 1973. He is the longest-serving member of the House; he was previously member for Parramatta and Dundas. He held a number of positions in the Howard Government including Minister for Immigration and Attorney-General. He retired at the 2016 election. Julian Leeser is a former lawyer who is currently writing the biography of former Australian Prime Minister, Sir William McMahon,

All content from Kiddle encyclopedia articles (including the article images and facts) can be freely used under Attribution-ShareAlike license, unless stated otherwise. Cite this article:
Division of Berowra Facts for Kids. Kiddle Encyclopedia.