Cherrybrook is a suburb of Sydney, in the state of New South Wales, Australia 27 kilometres north-west of the Sydney central business district in the local government area of Hornsby Shire. Cherrybrook is often referred to as being located in the Hills District of Sydney.

Joseph Harrison, who had married Mary Ann Thompson, settled on a block in the area in 1839, planted orchards and built a small timber cottage they called "Cherrybrook Cottage". The name "Cherrybrook" is believed to have come from the fact they grew cherry trees near the creek, which passed through their land. Their 65-acre (260,000 m2) block, which became known as "Cherrybrook Farm", had been granted originally to Mary Russell during the 1820s. The orchards here produced peaches, apricots, pears, plums, and citrus fruit. Many years later the property was bought by Eric Vaux, who established a dairy and kept the name Cherrybrook.

In February 1959, the land was subdivided to become the first project home village in Sydney. The original bushland was bulldozed, and exhibition homes were built on cut and fill sites, then landscaped. Accelerated development occurred again in the remaining rural areas in the 1980s, and Cherrybrook Post Office opened on 20 July 1994. 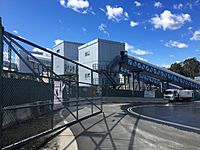 Cherrybrook is serviced by Hillsbus bus routes linking to Sydney CBD and Cherrybrook railway station, which is on the Metro North West Line of the Sydney Metro network, which opened 26 May 2019.

Cherrybrook has a large number of Christian churches of many denominations:

There is also a Buddhist Mahāyāna Monastery.

According to analysis published by Hornsby Council, the largest changes in Cherrybrook residents' religious affiliations from the census in 2006 to 2011 were for those who nominated:

Recreation areas include Greenway Park (featuring Indoor Heated Swimming Pool and a fenced Dog Park), The Lakes of Cherrybrook, Edward Bennett Oval (Soccer, Cricket), Thomas Thompson Park (Tennis, Soccer, Cricket), and a number of other small parks. Cherrybrook also has a number of walking trails and fire trails that are part of the Berowra Bushland Reserve, including the Callicoma Walk. Cherrybrook has a large Baseball community with over 500 playing members who call Greenway park home for the Greenway Giants Baseball Club.

According to the 2011 census there were 18,778 residents in Cherrybrook. Of these:

Cherrybrook Technology High School (CTHS) is currently the largest government secondary school in the state with over 2000 students and is growing larger each year, although it was built to accommodate 900 students.

All content from Kiddle encyclopedia articles (including the article images and facts) can be freely used under Attribution-ShareAlike license, unless stated otherwise. Cite this article:
Cherrybrook, New South Wales Facts for Kids. Kiddle Encyclopedia.