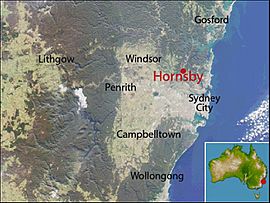 Location map of Hornsby based on NASA satellite images

Hornsby is a suburb in the Upper North Shore Sydney region of Sydney, in the Australian state of New South Wales 23 kilometres (14 mi) north-west of the Sydney central business district. It is the administrative centre of the local government area of Hornsby Shire.

The name Hornsby is derived from convict-turned-constable Samuel Henry Horne, who took part in the apprehension of bushrangers Dalton and MacNamara on 22 June 1830. In return he was granted land which he named Hornsby Place. The suburb of Hornsby was established on the traditional lands of the Darug and Kurringgai people. There are more than 200 known Aboriginal sites in the Hornsby Shire.

The first European settler in the area was Thomas Higgins, who received a grant of land in Old Mans Valley. A railway station named "Hornsby Junction" opened on 17 September 1886 to the north of the town of Hornsby, which had developed on the site of Horne's grant. It formed the junction of the Northern Line and the North Shore Line which were yet to be completed at that time. Hornsby station was one stop further south on the Northern Line. Due to confusion by commuters alighting at the incorrect station expecting to transfer to a connecting train, the old Hornsby station was renamed Normanhurst on 17 November 1898 after prominent local activist and engineer Norman Selfe, while the Hornsby Junction station assumed the current name of Hornsby.

The first Hornsby Post Office opened on 1 August 1864, and was renamed South Hornsby on 1 May 1900, the same day Hornsby Junction office near the railway station (open since 1887) was renamed Hornsby. The latter office remains open; the South Hornsby office was renamed Normanhurst in 1905.

Residential growth in the area was left to private developers, who acquired land both east and west of the railway station. Realizing that working class housing tended to be close to railway stations, the developers aimed at providing the middle classes with quality housing further from the station, in areas with views. One of the first purchasers of land in the area was Annie Roberts, wife of Oscar Garibaldi Roberts, who became one of the first councilors in the Hornsby Shire. Having acquired a property in Rosemead Road, the Roberts family built Mount Errington, a spectacular, two-storey mansion in the Arts and Crafts style, now heritage-listed. The Roberts family later acquired twelve blocks of land, which were then sub-divided into twenty-three blocks and offered for sale as the Roberts Mount Errington Sub-division. The area proceeded to grow as a prestige housing estate, featuring a number of houses in the Federation style. One of them was Birklands, a heritage-listed, Federation house built in 1902 in Dural Street. The house was originally built for Louis Spier Roberts and his wife Elizabeth, and stayed with the Roberts family until 1938.

The Hornsby Shire Council was established in 1906. In 1961, The Westfield Group built a shopping mall at Hornsby, making it one of the first suburbs in Sydney with a modern-style shopping centre. A competing shopping centre, Northgate, opened in 1979 but was eventually bought by Westfield. In late 1999, the two sites were amalgamated when the original Westfield was demolished and Northgate was renovated to create the new Westfield Hornsby which opened in November 2001. 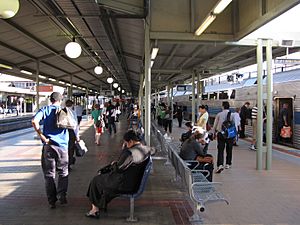 Hornsby is 25 kilometres (16 mi) by train and about 24 kilometres (15 mi) by road from the Sydney central business district. Hornsby railway station is the junction of the T1 North Shore and the T9 Northern Line of the Sydney Trains network and is a hub for some services and is connected via bridge to Westfield. There are frequent railway services to the central business district via Strathfield or via Gordon. Intercity and regional trains also stop at Hornsby on the way to the Central Coast, Newcastle and further north.

Transdev NSW operates one cross regional service from the Hornsby Interchange with;

Hornsby Interchange is served by two NightRide bus routes with:

The Pacific Highway, which passes through Hornsby, was formerly the main road link between Sydney and north-eastern Australia. The completion of the Pacific Motorway (M1), which has its southern end at the neighbouring suburb of Wahroonga, means that the heavy traffic now bypasses the already busy Hornsby town area.

In October 2020, the northernmost section of the NorthConnex tunnel also located in close proximity to Hornsby in the neighbouring suburb of Wahroonga was opened.

The opening of the NorthConnex was a key missing link to the Sydney Motorway network and its opening provides direct connectivity from the M1 to the Sydney orbital motorway network through a direct underground connection to the M2 and M7 motorways and beyond. The tunnel also provides an alternate route to the Sydney CBD, Ryde area and Eastern and Inner West suburbs via the Lane Cove Tunnel, bypassing the congested Pennant Hills Road and Pacific Highway.

Residential areas, consisting of low-to-medium density housing, are located on both sides of the railway line. Many of residential areas on the western side of the train line enjoy bushy surrounds and close proximity to Regional and National Parks, as well as the beautiful Lisgar Gardens.

In recent years, high-rise apartments have been constructed adjacent to the train line as part of the NSW state planning policies to allow medium to high density development along transport corridors.

Hornsby has long been associated with Ginger Meggs, a cartoon by Jimmy Bancks who grew up in Hornsby, which has appeared in Australian newspapers since 1921.

The local newspaper that serves the area is the Hornsby Advocate, owned by the Cumberland Newspaper Group.

Hornsby Aquatic Centre, which was built in 1962, had reached the end of its safe working life, and was closed on Friday 24 December 2010. It had featured a fifty-metre pool with 8 lanes and a small twelve-metre pool, also with 8 lanes. A new pool was built and opened on 11 August 2014. 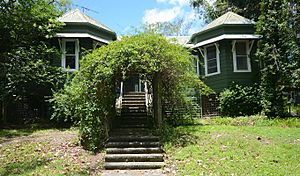 The scientist and explorer Edgeworth David lived in Hornsby towards the end of his life. His house, known as Coringah, was located on a property at the corner of Burdett Street and Sherbrook Road, and included a large garden. This property had originally been obtained in 1901 by Edward Swain, who built the cottage that still stands. The property was purchased by Edward Lear in 1916 and then by Edgeworth David in 1920. David's wife continued to live there after his death in 1934.

After David's death, subsequent owners preserved the garden, until Hornsby Council acquired the property in 1999. It is now known as Edgeworth David Gardens and is open to the public. It is heritage-listed. 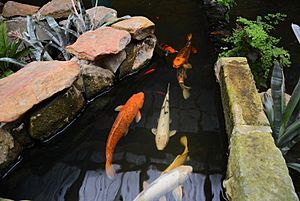 Lisgar Gardens are located in Lisgar Road, west of the Pacific Highway. The gardens were created by Max Cotton, who lived in Lisgar Road. In 1920, Cotton purchased land from his brother Leo and began developing the gardens for his own interest and satisfaction. With these gardens, Cotton could indulge his interest in horticulture and genetics. Aided by friends and family, he created extensive gardens and fishponds on the natural bushland that sloped down from Lisgar Road.

Cotton became friends with Professor Eben Gowrie Waterhouse—owner of Eryldene in the suburb of Gordon—and the two spent much time together, sharing an interest in camellias. By the mid-1960s, Cotton's health was failing after forty-five years of working on the gardens, and they were acquired by Hornsby Council. They were officially opened to the public on 21 September 1968. They are heritage-listed. 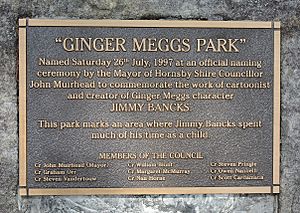 This park is located in Valley Road and is named after Ginger Meggs, a comic-strip character created by the Australian cartoonist Jimmy Bancks. Bancks spent much time in the area around this park during his childhood, so Hornsby Council named it after his famous character Ginger Meggs. A nearby creek was named Jimmy Bancks Creek. The park was officially named Ginger Meggs Park during a formal naming ceremony by the Mayor of Hornsby, John Muirhead, on 26 July 1997.

All content from Kiddle encyclopedia articles (including the article images and facts) can be freely used under Attribution-ShareAlike license, unless stated otherwise. Cite this article:
Hornsby, New South Wales Facts for Kids. Kiddle Encyclopedia.