Eryldene is a heritage-listed former family residence and now house museum located at 17 McIntosh Street in the Sydney North Shore suburb of Gordon, Ku-ring-gai Council, New South Wales, Australia. It was designed by William Hardy Wilson and built from 1913 to 1936 by Rudolph G. Ochs. The property is owned by The Eryldene Trust. The house and its garden, which is noted for its camellias was added to the New South Wales State Heritage Register on 2 April 1999 and was listed on the (now defunct) Australian Register of the National Estate.

Eryldene was built by Professor Eben Gowrie Waterhouse OBE CMG (1881 – 1977) and his wife Janet. Professor Waterhouse was lecturer in modern languages and a renowned expert on camellias. It was the family home of entomologist Dr Doug Waterhouse CMG AO (1916 – 2000). Eryldene was designed by William Hardy Wilson, Australia's leading advocate of the Old Colonial Georgian Revival movement, with major input from Prof. Waterhouse. It is a single storey cement rendered brick bungalow of conventional domestic construction with a hipped roof of terracotta roof shingle. Its symmetrical facade faces the formal garden frontage from which a central sandstone path and steps lead to an entrance verandah beneath the roof line. The verandah terminates at a loggia at each end and is broken up into five bays with wooden Doric columns placed at regular intervals, four of which are paired to mark the entrance at the centre. At the rear, the building wraps around a central courtyard framed by columns and open to the garden. Internally, a central hall separates two main rooms on either side. A hall at the rear echoes in plan the verandah and opens to the courtyard and the remaining rooms. The interior spaces are modest in scale and proportion. They are enriched by detailed elements inspired by colonial architecture researched by Wilson, including windows, doors and fanlights, architraves, skirtings, picture rails and mantelpieces. 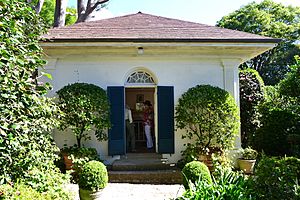 The house was designed to link with its formal garden setting, which was laid out by Wilson and Professor Waterhouse and is testimony to their shared interest in the Orient. There are garden structures designed by Wilson and others including a temple in the front garden (Wilson 1913); garden study, fountain and pigeon house (Wilson and his partner John L Berry 1921-22), garden shed (Berry 1924), tea house (Wilson 1927) and garage and moon gate (1936). 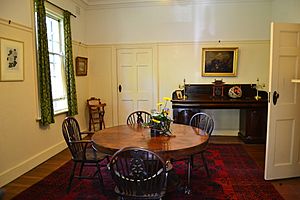 The Eryldene Trust was established in 1979 by members of the local community to fund raise for the purchase and maintenance of the property. In 1993, the house opened as a museum and operates under the administration of the Eryldene Trust. It is open to the public at set times from April to September.

All content from Kiddle encyclopedia articles (including the article images and facts) can be freely used under Attribution-ShareAlike license, unless stated otherwise. Cite this article:
Eryldene, Gordon Facts for Kids. Kiddle Encyclopedia.