Gordon is a suburb on the Upper North Shore of Sydney in the state of New South Wales, Australia 15 kilometres (9 mi) north-west of the Sydney Central Business District and is the administrative centre for the local government area of Ku-ring-gai Council. East Gordon is a locality within Gordon and West Gordon within West Pymble.

The name 'Gordon' first appears as the name of the survey parish covering most of the upper north shore, assigned by the NSW Surveyor-General Sir Thomas Mitchell. This is believed to commemorate Sir Willoughby Gordon, with whom he had served during the Peninsular War and who was the quartermaster-general of the regiment in which Mitchell had served. The survey parish, and later suburb and municipality of Willoughby also commemorates his name.

Settlement of the area commenced about 1820. The early settlement at Gordon was originally known as Lane Cove. The earliest school at 'Lane Cove', as Gordon was then known, was established at the behest of Governor Macquarie in 1816. The first Lane Cove Post Office opened on 1 February 1860. The name of the village and Post Office was changed to Gordon, after the Gordondale estate of Robert McIntosh, on 1 June 1879. Gordon Railway Station on the North Shore Line was built in 1888.

Annie Wyatt was the founder of the National Trust in Australia. She lived for a time in a single-storey cottage in Park Avenue. 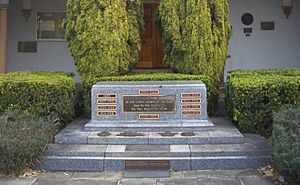 Gordon is located on a major transport artery, the Pacific Highway and near the intersection of Ryde and Mona Vale Roads which form a link between the northern beaches, Homebush Bay and the St George District and Sutherland Shire.

Gordon railway station is on the North Shore, Northern & Western Line of the Sydney Trains network with frequent commuter services. The railway station was built in 1888 and has an important heritage relationship with its landscaped gardens; it has been preserved as an example of an historic Edwardian station. Lifts to the platforms have been a recent addition. A bus stop outside the station is a terminus for various routes including those to St Ives, West Pymble, Mona Vale/Warriewood and Macquarie University. These are operated by two different bus companies, Transdev NSW and Forest Coach Lines. At the 2011 census, 28.9% of employed people travelled to work on public transport and 47.6% by car (either as driver or as passenger).

Gordon is home to two schools:

Gordon West Public School is named for the suburb, but is located in West Pymble.

Gordon has a commercial area with many shops and restaurants along the Pacific Highway and around Gordon railway station. Gordon Centre, is a shopping centre owned by Charter Hall which includes a Harvey Norman, Woolworths and many stores and offices. Gordon Centre was originally built as a Farmers & Co department store, now part of Myer, before reopening as Gordon Centre in 1985. Gordon Village Arcade is a shopping arcade also owned by Charter Hall and includes many stores including a Post Office.

The administrative buildings for the local government area of Ku-ring-gai Council are located in Gordon.

Eryldene is a local historic house that is open to the public. Located in McIntosh Street, the house was designed for Professor Eben Gowrie Waterhouse by William Hardy Wilson and built circa 1913. The extensive garden is a significant part of the property in its own right. House and garden as a whole are listed on the Register of the National Estate. The house also has a state heritage listing.

Another notable home in the area is Tulkiyan, located on the Pacific Highway. This home was designed by Bertrand James Waterhouse, an architect who was popular for his residential work (he was also responsible for the design of Nutcote, the home of painter May Gibbs). He designed Tulkiyan in the Arts and Crafts style that he favoured in much of his work. Tulkiyan was built on part of a land grant that went back to 1823. The land changed hands many times until it was acquired by the Donaldson family, who commissioned Waterhouse to design the house. It stayed in the hands of the Donaldson family until 1994, when it was bequeathed to Ku-ring-gai Council. Tulkiyan has a state heritage listing.

Gordon is also the location of a notable house designed by the architect Alexander Stewart Jolly. Nebraska, in Yarabah Avenue, is a distinctive home reminiscent of a log cabin. One of its features is the irregular stonework. It is heritage-listed.

Approximately two-thirds (66.2%) of the dwellings in Gordon are separate houses, 7.1% are semi-detached (mainly townhouses), and 26.4% are flats, units or apartments. The average household consists of 2.8 people.

At the 2011 census, there were 6,592 residents in Gordon. The population of Gordon was older than average, with a median age of 41 compared to the national median of 37, and 17.1% of people aged 65 years and over. Almost half of residents were born outside of Australia, with the top countries of birth being China, England and the Republic of South Korea. About a third of people spoke a language other than English at home, with the most common languages being Mandarin, Cantonese and Korean. The median household income of $2,223 was higher than the national figure of $1,234. Housing was expensive in Gordon, with the median weekly rent being $580 and the median monthly mortgage payment being $3,000. The most popular response to the Census question about religion was "no religion".

All content from Kiddle encyclopedia articles (including the article images and facts) can be freely used under Attribution-ShareAlike license, unless stated otherwise. Cite this article:
Gordon, New South Wales Facts for Kids. Kiddle Encyclopedia.