Kids Encyclopedia Facts
Not to be confused with North Beach.

The Northern Beaches is a region within Northern Sydney, in the state of New South Wales, Australia, near the Pacific coast. This area extends south to the entrance of Port Jackson (Sydney Harbour), west to Middle Harbour and north to the entrance of Broken Bay. The area was formerly inhabited by the Garigal or Caregal people in a region known as Guringai country. 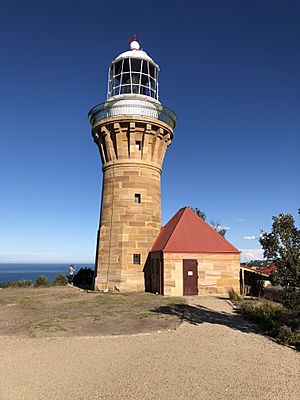 The traditional Aboriginal inhabitants of the land now known as the Northern Beaches were the Kuringgai people of the Eora nation. Within a few years of European settlement, the Kuringgai had mostly disappeared from this area mainly due to an outbreak of smallpox in 1789. Much evidence of their habitation remains especially their rock etchings in Kuring-gai Chase National Park which borders northern beaches's north-western side. The northern beaches region was explored early on in the settlement of Sydney, only a few weeks after the arrival of the First Fleet. However, it remained a rural area for most of the 19th and early 20th centuries, with only small settlements in the valleys between headlands. While it was geographically close to the city centre, to reach the area over land from Sydney via Mona Vale Road was a trip of more than 100 kilometres (62 mi).

Since those days, urban growth proceeded slowly until the 1960s when development accelerated because of improved roads and a general increase in living standards in the regions.

In 1906, the Warringah Shire council was formed the NSW Government Gazette, along with 132 other new Shires within New South Wales. It ran roughly from Broken Bay in the north to Manly Lagoon to the south, and by Middle Harbour Creek and Cowan Creek in the west. Pittwater was incooperated as the "A Riding" of Warringah Shire, however for many years there existed a sentiment held by some in A Riding, the northern Riding and the largest in Warringah, taking up more than 40% of Warringah's land area, that they were being increasingly ignored and subject to what they considered inappropriate development and policies for their area. This culminated in 1991 when a non-compulsory postal poll of the residents of A Riding was taken over the question of a possible secession. This resulted in a 73.5% vote in favour of secession, however only 48.18% of residents took part in this vote. This vote was, however, 600 short of the total majority required. Over time, the Northern Beaches was often divided by the "Lower Northern Beaches", referring to the southern end of the region, and the "Upper Northern Beaches", referring to the northern end of the region (North Narrabeen to Palm Beach).

Today, the Northern Beaches is very well part of the Sydney metropolis, however maintains an isolated environment from the other regions of Sydney including the neighboring North Shore region. The "Forest District" became an unofficial district within the Northern Beaches region to describe the suburbs between Ingleside and the Upper North Shore.

The suburbs of the Northern Beaches district are:

The localities of the Northern Beaches district are:

The following primary, high and K-12 schools are located on the Northern Beaches: 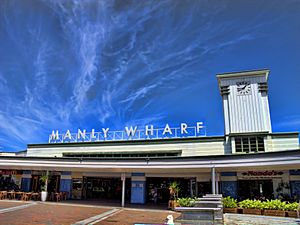 Public transport in the Northern Beaches is primarily provided by buses. Major bus interchanges are at Pittwater Road at Brookvale, Dee Why, Mona Vale and Manly Wharf. Buses connect to Chatswood and North Sydney stations on the North Shore line, served by Sydney Trains North Shore & Western and Northern services, as well as stations in the CBD.

All content from Kiddle encyclopedia articles (including the article images and facts) can be freely used under Attribution-ShareAlike license, unless stated otherwise. Cite this article:
Northern Beaches Facts for Kids. Kiddle Encyclopedia.