Curl Curl is a suburb of northern Sydney in the state of New South Wales, Australia, 18 kilometres (11 mi) north-east of the Sydney central business district, in the local government area of Northern Beaches Council. It is part of the Northern Beaches region.

The stretch of beach at Curl Curl is divided into North and South Curl Curl beaches. Curl Curl is known for some of the best surfing on the Northern Beaches. 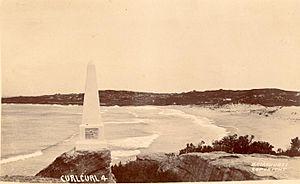 At the 2011 census, there were 2,415 residents in Curl Curl. The majority of people were born in Australia (77.2%), with the top other countries of birth being England 6.1%, New Zealand 2.6% and South Africa 0.9%. Family households 78.2% were the main type of household, with the other household types being single person households 16.8% and group households 5.0%. Median monthly mortgage payments were $3,000, much higher than the national median of $1,800.

Parks and playing fields are located on either side of Curl Curl Lagoon and Greendale Creek. These areas were originally low-lying swampy land that was reclaimed by dumping rubbish on both sides of the lagoon throughout the 1950s and 1960s.

Curl Curl Youth Club has organised soccer and netball since 1958.

Curl Curl Amateur Swimming Club runs regular Saturday afternoon swim events during the spring and summer months at the South Curl Curl rock pool. The club commenced in 1966 and has been running swimming events every year for swimmers of all ages and abilities ranging from learners to competitive athletes.

Curl Curl is serviced by four bus routes, 136 Manly to Chatswood, 139 Manly to Warringah Mall, E65 South Curl Curl to Sydney CBD and the 159 Manly to Dee Why.

All content from Kiddle encyclopedia articles (including the article images and facts) can be freely used under Attribution-ShareAlike license, unless stated otherwise. Cite this article:
Curl Curl Facts for Kids. Kiddle Encyclopedia.