Dee Why facts for kids

Kids Encyclopedia Facts
For the ferry, see Dee Why ferry.

Dee Why is a suburb of northern Sydney, in the state of New South Wales, Australia 18 kilometres north-east of the Sydney central business district. It is the administrative centre of the local government area of Northern Beaches Council, and along with Brookvale is considered to be the main centre of the Northern Beaches region.

The reasons for Dee Why's name remain unclear. The earliest reference to it is a pencil note in surveyor James Meehan's field book, "Wednesday, 27th Sept, 1815 Dy Beach - Marked a Honey Suckle Tree near the Beach". What it meant to him is not clear, but various claims have been put forward, including:

From 1840 the name was recorded as one word, 'Deewhy'. The term 'Dee Why' was also used to name 'Dee Why Heights' or Highlands, known as Narraweena since 1951, and 'Dee Why West', the name of which was changed to Cromer in 1969.

Little is known of the Aboriginal people who lived in the Dee Why area before European occupation, although there is evidence of a midden at the southern end of Dee Why Beach, and the indigenous people were known to fish on the then wider and deeper lagoon, where black swans were once seen in large flocks.

The first land in the area to be listed by the New South Wales government Gazette was 700 acres (280 ha) granted to William Cossar in the early 19th century, James Wheeler purchased 90 acres in 1842, but by the mid-19th century most of the land in what is now Dee Why had been acquired by James Jenkins and other members of the Jenkins family. Elizabeth Jenkins, eldest daughter of James, gave all her land to the Salvation Army upon her death in 1900, in recognition of their support in her old age. The Salvation Army received in total 1,740 acres (700 ha) of land, 200 acres (81 ha) of which were in Dee Why. An industrial farm, as well as hostels for boys, girls and women were established on this land. Access to the beach was limited by the Salvation Army's land, with a wire netting barrier running along its length.

Warringah Council was formed in 1906, giving Dee Why residents a local government. In 1911 it was decided that the tram line that had expanded in sections from Manly since 1903 was to be extended from Brookvale on to Collaroy Beach via Pittwater Road, and soon after to Narrabeen. The line opened on 3 August 1912 with an hourly service, and it was perhaps this development that caused the Salvation Army in 1913 to progressively sell off most of its holdings on the Northern Beaches, starting with The Oaks Estate Auction, which gave its name to one of the main streets of Dee Why, Oaks Avenue. Another main street, Howard Avenue, commemorates Commissioner Thomas Howard, the first commissioner of the Salvation Army in Australia and New Zealand. By 1920, most of Dee Why had been subdivided. From the end of 1938, the trams, as a result of losses due to low population density and competition with new bus routes that duplicated their services, operated only at peak hours for commuters and on weekends for tourists, and finally ceased operating with the final run on 30 September 1939.

In 1971, work began on a new Dee Why civic centre, inspired by Sulman Prize-winning architects Edwards, Madigan & Torzillo. The building was completed in 1972 and the Council moved there in 1973 from the Shire Hall in Brookvale where meetings had been held since 1912, making Dee Why the seat of Warringah Council. 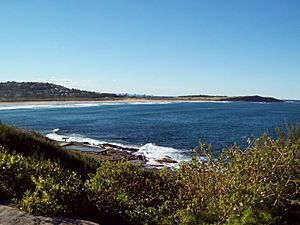 Dee Why Beach and Long Reef from the Bicentennial Coastal Walkway

Dee Why is contained in the drainage basin of Dee Why Lagoon, and stretches from Victor Road in the west to Dee Why Beach in the east, and from the crest of Wingala Hill to the northern edge of Dee Why Lagoon. The Bicentennial Coastal Walkway from Queenscliff to Palm Beach leads from North Curl Curl Beach in the south, along the cliffs of Dee Why Head and down to the southern end of Dee Why Beach. The track exhibits the coastal heath ecosystem that used to be spread all over the Warringah area, and has been extensively regenerated since 1991.

Another significant natural area within Dee Why is the Stony Range Regional Botanic Garden, established in 1957 on the site of an old quarry and located just south of the Dee Why town centre. The garden, which contains plants from all over Australia as well as those indigenous to the area, has four main sections, the rainforest gully, the sandstone heath on the site of the quarry, the Federation Cascades built in 2001 to commemorate the centenary of the federation of Australia, and the primitive plant section, with examples of plant species that have survived for millions of years. The garden is open from 8am to 5pm every day except Christmas Day, and admission is free. 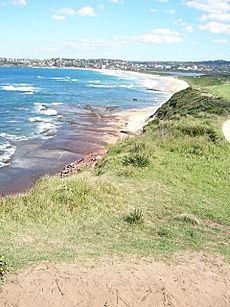 Dee Why Beach and Dee Why Lagoon, view from Long Reef

Dee Why Beach runs for about 1.2 km along the eastern border, overlooking the Tasman Sea. To the north are the dunes separating the beach from the Dee Why Lagoon. At its southern end is the Ted Jackson Reserve (renamed from Dee Why Beach Reserve in October 2010), with picnic areas and century old Norfolk Island Pines, similar to the ones in Manly. The reserve is contained by a seawall running for approximately 400m, and was upgraded in 2006, with new pathways, stairs, lookout platforms, an upper promenade and the restoration of the war memorial. There are two playgrounds in the vicinity, located at the southern end of the beach and west of the Dee Why Surf Life Saving Club, near to the lagoon, and several ocean pools located below cliffs to the south. Car parking facilities exist in the streets to the south, as well as a car park next to the Life Saving Club. 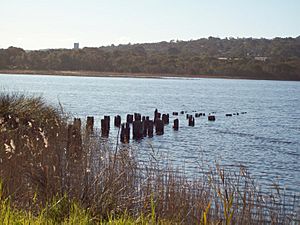 Behind the beach's remaining dunes, to the north of The Strand, is Dee Why Lagoon. Its entrance marks the northern end of Dee Why Beach and the southern extent of Long Reef Beach. The high conservation value of the lagoon and its surrounding area was recognised in 1973 when it was proclaimed a wildlife refuge. It is an extremely significant area for local and migratory birds, and is listed on migratory bird agreements with Japan and China. The Dee Why Lagoon Wildlife Refuge covers an area of 77 hectares, of which the lagoon takes up 30 hectares. The rest of the reserve is primarily swamp-based bushland, as well as the coastal dune ecosystem between the lagoon and the sea. It is a major scenic feature of the Northern Beaches, situated off Pittwater Road, and accessible from Dee Why Parade and The Strand.

Public transport in Dee Why primarily runs along Pittwater Road in the form of buses, with services southwards to the City, Manly and North Sydney, and northwards to Collaroy, Cromer, Narrabeen, and the Pittwater area. The main bus stop for these services is located at the intersection with Howard Avenue. There are also semi-regular services to Chatswood via McInstosh Road to the west, as well as to Manly via Freshwater. Two express services to the city also run from near Dee Why Beach in the early morning and back from the city in the afternoon to serve commuters on weekdays.

There are many sporting clubs in the area of Dee Why.

One of the well known teams is the rugby union side, Dee Why Lions. Dee Why Lions have very well established teams in the game of Rugby ranging from children's teams to the senior team that competes in the NSW Suburban Rugby Union sixth-division Meldrum Cup.

The Dee Why Football Club, also known as "The Swans", is a soccer club officially formed in 1946, making it one of the oldest soccer teams on the Northern Beaches. There are two medals, dating from 1925 and 1926, that were awarded to players for Dee Why, that suggest it could have an even longer history. Notably in 1983 at an exhibition match against Manly Warringah, Dee Why won 2-1 with the winning goal was being scored by guest player George Best, a former Manchester United and Northern Ireland national football team member.

Dee Why is also home to the Dee Why Surfing Fraternity, Australia's oldest surfboard riders club, founded in 1961 and still competing each month.

Dee Why was the home of the Evergreen Tennis & Squash Centre, located at Campbell Avenue until its closure in December 2010. The site is now occupied by houses.

In the 2011 census, the question concerning religious affiliation was optional. Of the residents who chose to answer that question, the main religious affiliations in Dee Why were Roman Catholic (27.0%), No Religion (23.6%), Anglican (15.9), Buddhism (3.9%), and Uniting Church (3.3%).

Dee Why, being the most populous suburb on the Northern Beaches, is home to churches of many denominations. A Methodist church was built on the corner of Howard Avenue and Avon Road in the 1930s, and is currently the oldest church building in Dee Why. With the rest of the Methodist Church, it joined the Uniting Church at its founding in 1977. It is currently home to the Cecil Gribble Congregation, a Tongan congregation of the Uniting Church. St John's Anglican Church was established in 1922. The current church, constructed in 1957 on the corner of Oaks Avenue and Avon Road, is well known for its modern stained glass artwork, installed over a period of years, including the recent addition of the Missions to Seamen Window in the new chapel, from the old MTS Chapel in The Rocks. St Kevin's Catholic Church was established in 1923 on Oaks Avenue. The current building, built in 1962, has a very distinctive design mimicking the structure of a tent. The Dee Why Baptist Church (1940) was renamed the New Life Baptist Church in 2000. St David's Uniting Church, the spire of which can be seen from a long way on Pittwater Road in both directions, was built in the 1940s as a Presbyterian church, joining the Uniting Church with two-thirds of the Presbyterians in 1977. The short section of road from Pittwater Road to Fisher Road was formerly known as part of Howard Avenue, but was renamed in the late 1990s to St David Avenue. The Salvation Army still maintains a presence in Dee Why, with a church located on Fisher Road, and there is a Jehovah's Witness Kingdom Hall further north on Pittwater Road.

According to the 2011 census, there were 19,838 residents in Dee Why. 56.1% of people were born in Australia. The most common other countries of birth were England (5.7%), New Zealand (3.4%), China (3.2%), India (2.8%) and Brazil (2.2%). the most common spoken languages were English, Serbian, Italian and Tongan. Dee Why's housing is higher density than average for Australia. Of occupied private dwellings in Dee Why, 76.5% were flats, units or apartments with only 19.5% of dwellings being separate houses.

All content from Kiddle encyclopedia articles (including the article images and facts) can be freely used under Attribution-ShareAlike license, unless stated otherwise. Cite this article:
Dee Why Facts for Kids. Kiddle Encyclopedia.