North Curl Curl is a suburb in northern Sydney, in the state of New South Wales, Australia 19 kilometres north-east of the Sydney central business district, in the local government area of Northern Beaches Council. It is part of the Northern Beaches region.

Curl Curl may be derived from the Aboriginal phrase curial curial, meaning river of life.

The name Curl Curl Lagoon was originally applied to Manly Lagoon, which empties into the ocean at Queenscliff, and the current Curl Curl Lagoon was named Harbord Lagoon. This was a result of the land grant of 'Harbord' originally being much larger than the suburb that later bore this name. The names were changed as a part of a renaming program in the 1980s to reflect the true location of the lagoons. 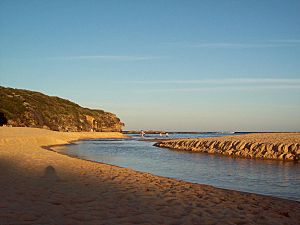 Curl Curl Lagoon and Greendale Creek separate North Curl Curl from Curl Curl in the south. To the west the border with Brookvale runs along Harbord Road. Wingala is an 'urban place' as classified by the Geographical Names Board in the north and western parts of the suburb, lying on the southern slopes of a hill that overlaps into Dee Why. Headland Road marks the northern boundary, while the Tasman Sea lies to the east.

North Curl Curl Beach sits on the south-eastern border, south of Dee Why Head and lying under its cliffs, and is divided from Curl Curl Beach by the mouth of the lagoon. The suburb is generally characterised by the sometimes steep southern slopes of Wingala Hill and Dee Why Head to the north, which flatten out into the former floodplain of the lagoon towards the south.

All content from Kiddle encyclopedia articles (including the article images and facts) can be freely used under Attribution-ShareAlike license, unless stated otherwise. Cite this article:
North Curl Curl, New South Wales Facts for Kids. Kiddle Encyclopedia.