Fairlight is a suburb of northern Sydney, in the state of New South Wales, Australia. Fairlight is located 13 kilometres north-east of the Sydney central business district in the local government area of Northern Beaches Council and is part of the Northern Beaches region.

Fairlight lies between Balgowlah and Manly on both sides of Sydney Road. The suburb reaches north past Balgowlah Road and the western boundary is Hill Street.

Fairlight takes its name from Fairlight House built by Henry Gilbert Smith (1802-1886) on land he bought in 1853 from John Parker who had received a land grant in 1837. The house was named after Fairlight, East Sussex, a historic village in Hastings, on the south coast of England.

Fairlight was originally only the area near the beach where Fairlight House once stood, and the suburb at the top of the hill was called Red Hill, due to the pre World War II red gravel surface of Sydney Road.

The Port Jackson & Manly Steamship Company has a tradition of naming its ferries after the suburbs of the Northern Beaches; in 1966 if named a hydrofoil Fairlight, which in turn gave its name to the Fairlight CMI synthesizer.

Fairlight has a cemetery in Griffiths Street. The Manly Fire Station is located on Sydney Road, Fairlight. 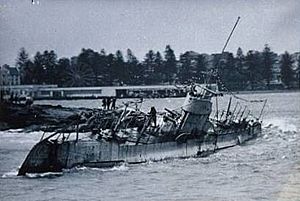 Fairlight Beach is located on the Manly Scenic Walkway on Sydney Harbour, which can be followed for some kilometres to Spit Bridge. The beach experiences light harbour swells and southerly winds. Though swells up to 2 metres were recorded following Hurricane Larry, it is not a surfing beach, as the shore is rocky and the break unpredictable. The beach has sand largely made up of shell grit (largely missing from the beaches on either side), and a small tidal swimming pool.

The K-12 was a 611-ton ex-submarine of the Royal Netherlands Navy (later the United States Navy) that was bought by private buyers after World War II and leased to the Port Jackson & Manly Steamship Company, who set her up as a museum ship at a custom berth adjacent to Manly harbour pool. When storms struck in June 1949, an attempt was made by her owners to tow her to a safer berth in Neutral Bay, however the tow ropes broke, and the submarine grounded on rocks near Fairlight Beach. The hull was lightened by salvagers then re-floated on 7 January 1951, and towed up the Parramatta River to Ryde Road bridge; however here she sank again after her seacocks were vandalised. Some sources say that the engines and sections of the bow remain in Fairlight and are accessible by scuba divers.

At the 2011 census, there were 5,489 residents in Fairlight. The majority of people (62.9%) were born in Australia. The top other countries of birth were England 11.9%, New Zealand 2.9%, South Africa 1.6%, Scotland 1.5% and United States of America 1.4%. The most common occupation was Professionals (38%) and the median household weekly income was high at $2,213. There was a high rate of public transport use with 29.2% of people travelling to work by public transport, compared with 10.4% nationally. Housing was expensive in Fairlight, with the median weekly rent being $505 and the median monthly mortgage payment was $3,000.

Fairlight Beach is popular for swimming and snorkelling and as a vantage point to view harbour yacht races. Fairlight is home to the Manly Golf Club and Golf Course. Shops and cafes are located in a shopping strip in Sydney Road.

Fairlight is home to an annual Christmas Lights fundraising competition on Edwin Street.

All content from Kiddle encyclopedia articles (including the article images and facts) can be freely used under Attribution-ShareAlike license, unless stated otherwise. Cite this article:
Fairlight, New South Wales Facts for Kids. Kiddle Encyclopedia.