Services to Manly commenced in the 1850s. The Port Jackson and Manly Steamship Company operated the service until it was sold to Brambles Industries in April 1972 and the Public Transport Commission in December 1974. In the mid 1960s hydrofoil services were introduced to complement the traditional ferries.

The Sydney JetCats high speed service, was discontinued on 31 December 2008 and replaced with a privately owned service operated by Manly Fast Ferries. In March 2010, the government announced that that Manly Fast Ferries contract had not been renewed. Instead another private operator, Sydney Fast Ferries, was awarded a five year contract from 1 April 2010. However both operators have continued to operate services between Circular Quay and Manly During 2014 Transport for NSW has put out a tender for a combined service to commence during 2015 with Bass & Flinders Cruises, SeaLink Travel Group, Sydney Fast Ferries and Transit Systems responding. On 13 December 2014, it was announced that Manly Fast Ferries had won back the rights to operate the service, with a new contract which commencing on 1 April 2015.

On 28 July 2012 Harbour City Ferries, a 50/50 joint venture between Transdev Australasia and Transfield Services, began operating the services of Sydney Ferries under a seven year contract.

In 2013, the Manly Ferry was given the designation of F1, during 'The Hop" branding roll out. This is designed to simplify transport in Sydney

During the Summer Holidays, the Manly Ferry runs to a "Summer Timetable" which provides additional services to cater for demand from increased tourist numbers. 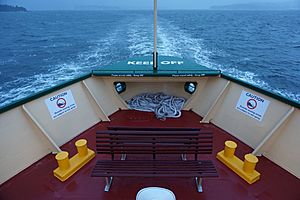 The current Harbour City Ferries fleet of four Manly ferries are known as the Freshwater class and comprise, in order of commissioning, the Freshwater, Queenscliff, Narrabeen, and Collaroy, which were commissioned between 1982 and 1988. They were built by the State Dockyard in Newcastle and Carrington Slipways in Tomago. They are 70 metres in length, 12.5 metres wide, draught of 3.3 metres and they displace 1,140 tonnes. Their passenger capacity is 1,100 and their service speed is 16 knots.

They are powered by two Daihatsu model 8DSMB-32 turbo-charged diesel engines which each develop 2238 kW at 600rpm, and have hand-controllable pitch propellers. The hull and lower cabin area are of welded steel construction and the upper cabin and two wheelhouses are aluminium. The newest vessel, Collaroy, is fitted with Sperry Gyrofin stabilisers and additional catering facilities for ocean cruising.

Occasionally, a Lady Class ferry may be seen operating the F1: Manly. This is often due to one of the Freshwater Class being unavailable. Lady Class are often chosen to replace Freshwater Classes, due to their large capacity. First Fleet and even SuperCats have been known to go as far as Manly on rare occasions. 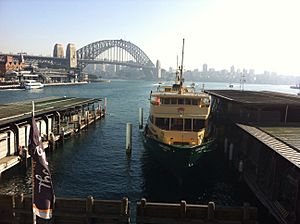 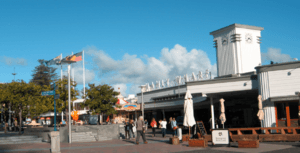 Sydney Ferries services use Wharf 3 at Circular Quay for services to Manly. Wharf 3 is specially designed to allow for double deck boarding and alighting, lowering dwell time for ferries.

This wharf serves the suburb of Manly and is located opposite the harbour end of The Corso on The Esplanade. The wharf was designed to allow for double deck boarding on the "A" side of the wharf. The "B" side is used by Manly Fast Ferries for services to Circular Quay while Sydney Harbour Eco Hopper and Captain Cook Cruises Harbour Explorer use the Manly Hotel wharf also known as the East Wharf, just south east of the main wharf, for Hop On/Hop off services around Sydney Harbour.

Local bus services depart from stands in front of the wharf to many Northern Beaches Suburbs.

All content from Kiddle encyclopedia articles (including the article images and facts) can be freely used under Attribution-ShareAlike license, unless stated otherwise. Cite this article:
Manly ferry services Facts for Kids. Kiddle Encyclopedia.