The SS South Steyne is a former Manly ferry on Sydney Harbour. She was the world's largest steam-powered passenger ferry and operated on the service from 1938 to 1974. Restored in the 1980s, she served as a restaurant ship in Newcastle in the 1990s, and in 2000 was moved back to Sydney and open to the public at Darling Harbour. Since April 2016 she has been stored at Berrys Bay. She was added to the New South Wales State Heritage Register on 2 April 1999.

The South Steyne was designed by Walter Leslie Dendy and John Ashcroft and built from 1937 to 1938 by Henry Robb Ltd. of Scotland.

South Steyne is a double-ended, double-screw steamship powered by a 2,420-kilowatt (3,250 hp) four cylinder Triple expansion steam engine. The ship's boilers were fitted to burn either coal or oil however she has largely used oil. She could achieve a speed in excess of 17 knots, almost as fast as the twin Manly ferris, Dee Why and Curl Curl, in service since 1928.

She has a riveted steel hull, steel superstructure to sun deck level, steel bulwarks, teak decks and wheelhouses, eight watertight bulk-heads, bar keel, double bottom under engine only. The steel superstructure rises to sun deck level, with teak decks and wheelhouses. She has two funnels including a dummy containing a water tank. 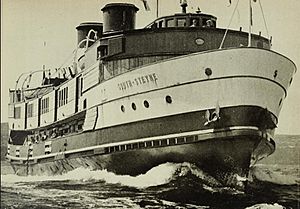 A new South Steyne arriving in Sydney after sailing from Scotland, September 1938

The Port Jackson and Manly Steamship Co. Ltd. was the best known of the Sydney ferry operators and was renowned for large and comfortable steamers that it ran to the seaside suburb and resort of Manly. Patronage was growing steadily in the 1930s and to increase fleet capacity and vessel speed the Port Jackson Co. ordered a new ferry boat. In December 1936 the General Manager of the Port Jackson Co., Walter Leslie Dendy went to Britain to study sea transportation, propulsion techniques and to order a new ferry. By March 1937, seven shipbuilders had submitted tenders.

The contract was awarded to the Scottish shipbuilder Henry Robb Ltd in Leith, Scotland for a steam reciprocating ship. The engine was built by Harland & Wolff Ltd., Belfast. The keel of the vessel was laid at Robb's Leith Yard in October 1937, and the SS South Steyne was launched on 1 April 1938. The name of the vessel came from the promenade behind the ocean beach at Manly.

She set off on 7 July with seventeen crew on board and with her vulnerable areas boarded up. Bringing her to Australia was Pedder and Mylchreest Ltd. of London and Captain R. M. Beadie was the master for the 22,000 kilometres (14,000 mi) voyage. Beedie returned to England after the voyage. Also on the voyage was Captain A. E. Rowlings, who acted as first officer who went to England to take delivery of the vessel on behalf of the owner, and Captain C. Henderson, the second officer, who was reported by The Sydney Morning Herald to be a native of Manly.

Passing through the Mediterranean in the lead up to World War II, she was checked first by French then Italian warships, and later a submarine. In the Suez Canal, the Canal Authority held her up as she did not have the correct masts and cable handling gear. She was eventually let through but without priority having to let other vessels pass. Waiting for a passing tanker, she was washed aground into the mud. Under tow by a French tug in an attempt to dislodge her, a line was caught up in her bow propeller which had to be removed by divers. She was further delayed by sandstorms and heavy seas in the Red Sea, however, she performed well in the south-west monsoon. South Steyne first sighted Australia in August, and after 64 days from Leith, she arrived at midday in Sydney on 9 September. 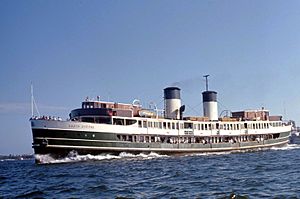 The South Steyne was the largest ferry to operate on Sydney Harbour. Between 1938 and 1974, she ran on the Manly service, crossing between Circular Quay and Manly over 100,000 times, carrying in excess of 92 million passengers.

Along with the other Manly ferries, during the Second World War, the South Steyne's white sections were painted a dark green to prevent it being seen at night.

In 1953, she was certified to cruise at sea within a 26 nautical mile radius of Sydney Harbour. A radio-telephone and a Grinnell fire sprinkler system were installed. She was used to run Sunday ocean cruises out of Sydney Harbour and north to Broken Bay. It was the first time a Manly ferry had steamed up to Broken Bay since Binngarra and Burra Bra had been flagships for the annual regatta in the 1920s. The South Steyne also was used to follow the start of the Boxing Day Sydney to Hobart yacht races out to sea. In 1964, a cocktail bar was installed and she was allowed to sell liquor while at sea. In 1967, an AWA radar set was fitted.

By 1970, the Manly ferry service was struggling due to lower patronage and maintenance of older ferries, including South Steyne, was being reduced. Brambles Holdings took over the Manly service from Port Jackson and Manly Steamship Company in 1971. Several ferries were retired and reduced maintenance saw South Steyne's sea-going certificate cancelled in 1973 ending the ocean cruises. At this time, South Steyne was the last steam ferry operating in Sydney. Her engines used three times the fuel of the other two remaining Manly ferries - the significantly smaller diesel-electric powered Baragoola and North Head.

On 25 August 1974, while she was moored at Balmain Wharf waiting to be surveyed under a government option to buy, a fire damaged the fan room, middle stairway, seats and paintwork on the upper promenade deckhouse above. The Public Transport Commission took over the Baragoola and North Head but not the South Steyne.

Restoration and contemporary use 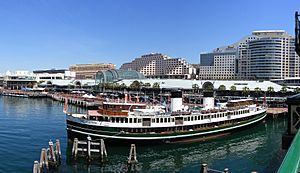 A group of concerned Manly residents formed a preservation society in 1975 with the slogan "Save Our Steyne". They were able to prevent the ferry from being towed behind an old aircraft carrier, and scrapped in Hong Kong. The major damage in the fan room was repaired, new light fittings added to the promenade deck, the funnels and promenade deck sand blasted and the whole ferry was repainted. Negotiations with the Public Transport Commission took place to allow the ferry to run two return, peak-hour services to Manly, Monday to Friday. However, running the ferry was very political and restoration of the boilers was hampered by the surveyors from the Maritime Services Board. Lloyd's Register offered to hold the survey for the ferry but she was soon returned to the vendors because repayments were not made.

The South Steyne passed through a number of ownerships with intermittent conservation and restoration work being undertaken. Restoration work began in 1987 at Rileys Hill Dry Dock near Ballina and later in Melbourne. In 1988 it was refitted as a cruising vessel/function centre and entered service in Melbourne, its first function was as "Royal Yacht" for the Queen in April 1988. In 1991 it was sold to a Newcastle owner and was returned to NSW, initially to Newcastle, then to Sydney, where it was moored in Darling Harbour as the 2000 Olympic Information Centre at Darling Harbour. The vessel was added to the New South Wales State Heritage Register on 2 April 1999. In April 2016 it was temporarily relocated to Berrys Bay while the Darling Harbour wharf was rebuilt.

The vessel's owner, Brian McDermott, has been funding repairs and maintenance from the restaurant's takings, but his business is on hold until NSW Roads & Maritime Services find a new berth.

The South Steyne was the best known of the Manly ferry line which played a major role in the suburbanisation of Sydney and in the development of its recreational patterns. It is a very high quality example of naval architecture and an outstanding example of the plating (having no flat plates) for which Henry Robb of Leith was famous. It is the finest example of the most significant Australian contribution to sea navigation technology - the development of high speed, double-ended operation in deep sea conditions. It has an intact operating example of propulsion by steam reciprocating engine. It epitomised the Manly ferry as part of Sydney's image and its popular urban culture; and remains, like the Harbour Bridge, a powerful piece of Sydney imagery. It is held in high esteem by the local community and remains in the collective memory of the nation. It provides a working example of the propulsion and auxilary functions of marine steam power. (Heritage Office 1992) ...

—NSW Office of Heritage and Environment, Statement of Significance

South Steyne is listed on the New South Wales State Heritage register. The NSW Office of Environment and Heritage describes the ship's condition as follows:

"As at 12 April 2000, the physical condition was good but with high level of maintenance required to retain this condition.

This vessel was built to very high standards of structural strength and is In excellent condition, though requiring a constant high level of maintenance to maintain that condition. Hull, machinery and exterior generally in original condition. The open shelters at the ends of the promenade deck were enclosed and the interiors were significantly altered in the 1980s. Both reversible at some expense. (Original detailed plans exist, held at vessel, at Heritage Office and other repositories.)"

The following modifications were made since her construction:

All content from Kiddle encyclopedia articles (including the article images and facts) can be freely used under Attribution-ShareAlike license, unless stated otherwise. Cite this article:
SS South Steyne Facts for Kids. Kiddle Encyclopedia.