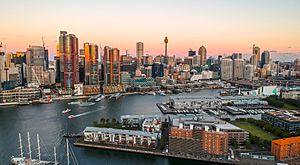 An aerial view of Darling Harbour and its surrounds, looking east

Darling Harbour is a harbour adjacent to the city centre of Sydney, New South Wales, Australia that is made up of a large recreational and pedestrian precinct that is situated on western outskirts of the Sydney central business district.

Originally named Long Cove, the locality extends northwards from Chinatown, along both sides of Cockle Bay to King Street Wharf on the east, and to the suburb of Pyrmont on the west. Cockle Bay is just one of the waterways that makes up Darling Harbour, which opens north into the much larger Port Jackson.

The precinct and its immediate surroundings are administered independently of the local government area of the City of Sydney, by Property NSW. 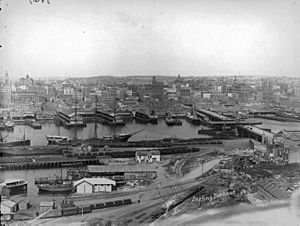 Darling Harbour is named after Lieutenant-General Ralph Darling, who was Governor of New South Wales from 1825 to 1831. The area was originally known as Long Cove, but was generally referred to as Cockle Bay until 1826 when Governor Darling renamed it after himself. The name Cockle Bay has recently been restored in reference to the headwaters of the harbour. It was originally part of the commercial port of Sydney, including the Darling Harbour Railway Goods Yard. During the Great Depression, the eastern part of Darling Harbour (Barangaroo) became known as The Hungry Mile, a reference to the waterside workers searching for jobs along the wharves.

Much of the land had been the site of the NSW Railways central marshalling yards and freight consolidation centre. The Enquiry into the NSW industry, including rail/road competition (1978–80), under Commissioner Gavan McDonell, found that this centre was inefficient, should be moved, and the land used for other public purposes. These recommendations were acted upon and by the mid-to-late 1980s, when the area had become largely derelict it was redeveloped as a pedestrian and tourist precinct as an initiative of then New South Wales Minister for Public Works, Laurie Brereton. The Sydney Convention and Exhibition Centre at Darling Harbour was a venue of the 2000 Summer Olympic Games and a key meeting venue of APEC Australia 2007. 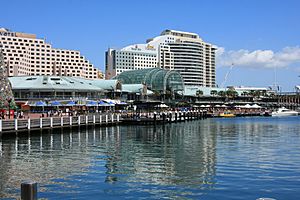 Western side of Darling Harbour 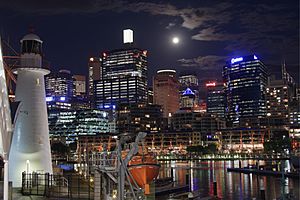 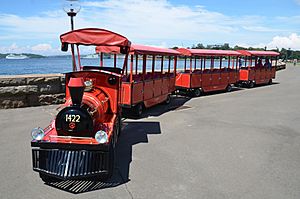 The Darling Harbour precinct is home to a number of major public facilities and attractions, including: 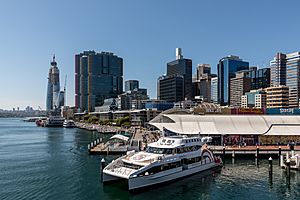 Darling Harbour is accessible via various modes of public transport. The precinct is served by the Inner West Light Rail of Sydney's light rail network, with access via Paddy's Markets, Convention, Exhibition and Pyrmont Bay stations. Ferry wharves including Barangaroo and Pyrmont Bay provide access to the Pyrmont Bay ferry services to Circular Quay and other suburbs while the Barangaroo wharf also provides access to the Parramatta River ferry services. King Street Wharf is accessible by private boat charters. The Goods Line is a park and pedestrian pathway connecting Darling Harbour to Railway Square and Central station. The nearest train station is Town Hall.

Darling Harbour will be served by Pyrmont as a future rapid transit station that will be built as part of the Sydney Metro West project. 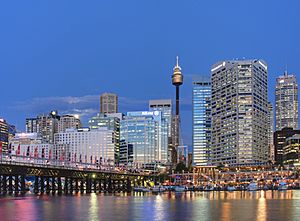 Darling Harbour looking towards the east

East Darling Harbour is part of a massive urban renewal development. Plans for the 18-hectare (44-acre) site include half business and residential developments, while the other half to be reserved for open public space. The state government of NSW declared plans for "Globe Street", a street designed to become Australia's and Asia Pacific's centre for corporate trade (styled on New York's "Wall Street" district). The urban renewal development is not expected to be completed until 2020. East Darling Harbour will be known as Barangaroo.

The Sydney Convention and Exhibition Centre site is being replaced by the new International Convention Centre Sydney (ICC Sydney), scheduled for completion by December 2016. The new site will include a 40,000-square-metre (430,000 sq ft) exhibition facility, and is being developed by a consortium comprising AEG Ogden, Lend Lease, Capella Capital and Spotless Facilities Services, with AEG Ogden playing the role of venue operator.

This area was the site of the Sydney Port Authority and featured an Overseas Passenger Terminal (Wharf 8) which was mainly used by the Pacific Dawn of the P&O Australia fleet and the Sun Princess, operated by Princess Cruises.

The area was temporarily used for several events during World Youth Day 2008, including the opening mass.

Darling Harbour is the location of the season residence on MTV's reality TV show, The Real World: Sydney, which aired in late 2007. The house has a large "Darling Harbour" sign along its edge, and the World Tower high rise building can be seen behind it.

On 27 August 2010, the soap opera Neighbours filmed scenes in the harbour and on board the cruise ship, Pacific Jewel.

All content from Kiddle encyclopedia articles (including the article images and facts) can be freely used under Attribution-ShareAlike license, unless stated otherwise. Cite this article:
Darling Harbour Facts for Kids. Kiddle Encyclopedia.