Chinatown (Chinese: 悉尼唐人街; pinyin: xīní tángrénjiē; Jyutping: sik1nei4 tong4jan4gai1) is an urban enclave situated in the southern part of the Sydney Central Business District, in New South Wales, Australia. It comprises the majority of the Haymarket suburb, between Central station and Darling Harbour. It is part of the local government area of the City of Sydney, and is Australia's largest Chinatown.

Sydney, and the colony of New South Wales experienced, Chinese migration as early as 1828. The first group of Chinese labourers from Amoy (modern day Xiamen) embarked for New South Wales in 1848. With the discovery of gold in 1851 Chinese immigration increased, and by 1855 the number of Chinese immigrants reached around 17,000. The Chinese population had traditionally been represented by those who came from Southern China (i.e. provinces such as Guangdong and Fujian), due to the majority of colonial ports being located in the southern coast of China.

The current location is the third in Sydney to be known as Chinatown. In the late 19th century, it was located in the Rocks area of Sydney and later moved to the area near Market Street at Darling Harbour. By the 1920s, it began to be established in its current location. Chinatown is centred on Dixon Street, a pedestrian street mall with many Chinese restaurants, and with a Paifang at each end. At the eastern side, running parallel with Dixon Street, are Sussex Street, which has a number of shops, and George Street, one of Sydney's main thoroughfares. At the eastern end of Chinatown, at the corner of George Street and Hay Street, there is a sculpture made from a dead tree trunk; created by artist Lin Li in 1999 and named Golden Water Mouth, it was said by its instigators to bring good fortune to the Chinese community. Other streets and lanes within Sydney's Chinatown include Factory Street, Goulburn Street, Little Hay Street, Kimber Lane and Thomas Street.

At the southern side of Chinatown, next to Hay Street, a large complex called Market City has been built, behind the walls retained from the site's old produce markets. It contains a modern shopping centre, restaurants (including an 800+ seat Yum Cha Restaurant called The Eight Modern Chinese Restaurant), boutique shops, City Amusements (a large indoor entertainment complex), and the Haymarket Paddy's Markets, a Wednesday-to-Sunday produce and flea market, as well as a large residential high-rise building called the Peak Apartments.

Unlike the Chinatowns in some other countries, Sydney's Chinatown has been relatively free of crime and hygiene issues. However, since there are many skyscrapers in Sydney, there are some concerns within the Chinese community about the building height restrictions imposed by the image-conscious local government authorities.

By the 1920s, Sydney's Chinatown migrated over to Campbell Street, and was then placed with the Capitol Theatre.

There are also satellite Chinatowns that have emerged in the past two decades in several Sydney suburbs such as Cabramatta, Ashfield, Hurstville, Eastwood, Campsie, Parramatta, Chatswood, Burwood, Flemington and Kingsford. But Sydney's Chinatown still remains a major focus for the Chinese Australian community.

Sydney is the sister city of Guangzhou in China, and as a gift to Sydney in Australia's Bicentennial year (1988), the Chinese Garden of Friendship was constructed on the western border of Chinatown in the Darling Harbour Precinct. It is one of the few public traditional Chinese gardens outside of China. 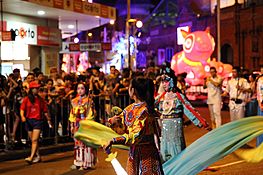 According to the Australian Bureau of Statistics, in 2016 the Chinatown and Haymarket area included a significant population of Chinese (31.9%), Thai (18.3%), Indonesian (5.6%), English (5.1%) and Korean (4.8%) population. The most spoken languages at home apart from English were Thai (20.4%), Mandarin (20.3%), Indonesian (10.2%), Cantonese (5.1%), and Korean (4.8%). Furthermore, there is a significant student population from Asia, due to the close proximity of educational institutions such as the University of Technology Sydney, Technical and Further Education (TAFE NSW), and the University of Sydney. As of 2016, 25.9% of the residents in Chinatown were studying at university or TAFE and 33.4% of individuals in the Haymarket area had a attained a bachelor's degree or above.

As a centrally located Chinatown (that is adjacent to, and being gradually absorbed by the growing central business district), there are many white collar workers. Out of the 65,950 workers in the surrounding area in 2017, 18% worked in finance & financial services, 17% in the government, and 13.6% in professional & business services. The median weekly household income in 2016 was $1,696, slightly above the national average of $1,659 in 2019.

All content from Kiddle encyclopedia articles (including the article images and facts) can be freely used under Attribution-ShareAlike license, unless stated otherwise. Cite this article:
Chinatown, Sydney Facts for Kids. Kiddle Encyclopedia.