Burwood is a suburb in the Inner West of Sydney, in the state of New South Wales, Australia. It is 10 kilometres (6.2 mi) west of the Sydney central business district and is the administrative centre for the local government area of Municipality of Burwood.

Burwood Heights is a separate suburb to the south. The Appian Way is a street in Burwood, known for its architecturally designed Federation-style homes.

Archaeological evidence indicates people were living in the Sydney area for at least 11,000 years. This long association had led to a harmonious relationship between the indigenous inhabitants and their environment, which was interrupted by the arrival of the British in 1788. The European desire to cultivate the land aided and abetted by a smallpox epidemic that forced the local people, the Wangal clan, away from their source of food and their spiritual connection with the land. 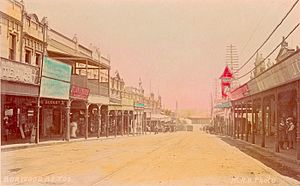 Captain Thomas Rowley (1748–1806) received a grant of 260 acres (110 ha) in 1799, and called his property Burwood Farm after Burwood Park, England. Following more land grants, his estate increased to 750 acres (300 ha). The grant stretched from Parramatta Road to where Nicholson Street and The Boulevarde are today and eastwards where to Croydon railway station is now. This is where he ran merino sheep on the property. 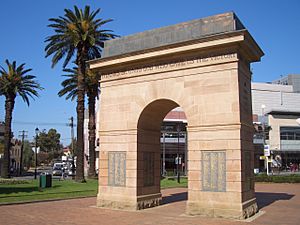 The first house, Burwood Villa, was built in the area in 1814, the same year that a stagecoach began running between Sydney and Parramatta. Burwood became a staging post along the road and the beginnings of a settlement started to develop. One of its most prominent early residents was Dr. John Dulhunty, a former naval surgeon who was appointed the Superintendent of Police for the Colony of New South Wales after his arrival in Sydney from England in 1826. Dr. Dulhunty became famous in the colony for fighting a gang of bushrangers that attacked his residence, Burwood House. He died suddenly in the house in 1828 but his son, Robert Dulhunty, went on to become the founder of the New South Wales regional city of Dubbo.

Subdivisions in the Burwood area in the 1830s propelled the growth of a village and by 1855, when the railway line opened, Burwood was one of the initial six stops on the Sydney-to-Parramatta route. The railway led to a huge growth in population. In 1874, the area became a municipality. 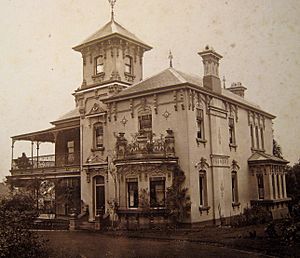 Burwood features many fine examples of architecture from the Victorian and Federation styles. St Paul's Anglican Church on Burwood Road was designed by colonial architect Edmund Blacket and built in 1871. Sir Donald Bradman and Lady Bradman, Jessie Menzies were married here in 1932. It is heritage-listed in the NSW State Heritage Register and in the Register of the National Estate. Nearby Woodstock in Church Street was built in the early 1870s by tobacco manufacturer Edwin Penfold. In the 1940s, it was taken over by the army, later becoming Broughton Migrant Hostel, before being bought by the council in 1974 for use as a community centre. Radio station 2RDJ-FM has been broadcasting from Woodstock since November 1983. Further south on Burwood Road is The Priory, built in 1877 by local councillor Mowbray Forrest, and Gayton, built in 1888 by NSW parliamentarian Richard Jones. The heritage'-listed St Nectarios Greek Orthodox Church in Railway Parade was formerly a Methodist church and was built in 1879.

Running between Burwood Road and Liverpool Road is The Appian Way, a model housing estate conceived by George Hoskins at the turn of the century. The street has been described as one of the finest streets of Federation houses in Australia and is state heritage-listed. In the centre of the Appian Way is a communal reserve which was converted into a lawn tennis club. 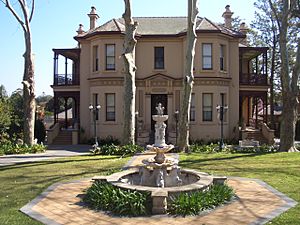 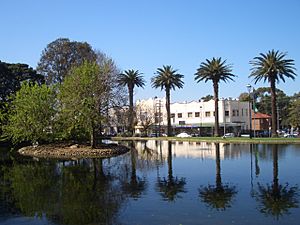 Burwood Park was established by the local council in 1882 on land formerly known as Edrop's Paddock. The original design of the park was based on the Union Jack flag, although it was later modified to allow a cricket oval to be established at the western edge of the park. Other features of Burwood Park include memorials to soldiers who died in World War I and Sandakan, a rotunda, a playground, a lake and an obelisk commemorating the site of Burwood Villa, the area's first house. It is also the location for Carols in the Park each Christmas. Burwood Park is located on Burwood Road opposite Westfield Burwood

Burwood has excellent access to public transport and Burwood railway station is on the T9 Northern and T2 Inner West & Leppington lines of the Sydney Trains network.

Trams to Mortlake and Cabarita once travelled down Burwood Road; trams ceased in August 1948.

Transdev NSW and Transit Systems provide many bus services to Burwood, from Hurstville, Rockdale, Eastgardens, Kingsford, Strathfield, Homebush, Campsie, Ryde, Bankstown, Liverpool as well as other locations across Sydney. There are two terminuses, Burwood station and Westfield Burwood. Transit Systems' Burwood Bus Depot is located on the corner of Shaftesbury and Parramatta Roads.

Burwood North is a future rapid transit station to be built as part of the Sydney Metro West project.

All content from Kiddle encyclopedia articles (including the article images and facts) can be freely used under Attribution-ShareAlike license, unless stated otherwise. Cite this article:
Burwood, New South Wales Facts for Kids. Kiddle Encyclopedia.