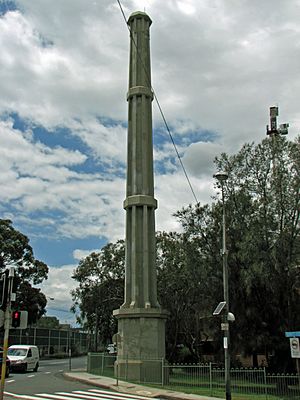 Sewer Vent at the corner of Railway Parade and Wentworth Road, Burwood. 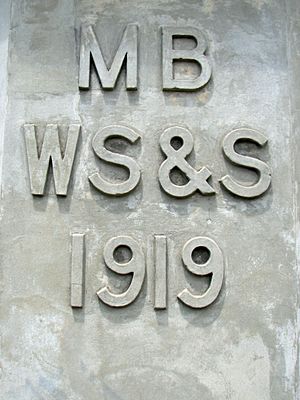 The Burwood Sewer Vent is a heritage-listed sewer ventilation stack located at Railway Parade in the Sydney suburb of Burwood in the Municipality of Burwood local government area of New South Wales, Australia. It was designed and built by the Metropolitan Board of Water Supply and Sewerage in 1919. It is also known as Wentworth Road Sewer Vent and Railway Parade Sewer Vent. The property is owned by Sydney Water, a statutory corporation of the Government of New South Wales. It was added to the New South Wales State Heritage Register on 15 November 2002.

The Main Western Carrier which fed into Botany sewer farm was completed in 1897 and encompasses the major crossing of Wolli Creek and Cooks River each by triple barrel 1800 mm dia. wrought iron/steel aqueducts. There are triple barrel brick arch aqueducts at the ends. Soon after construction more sewage was being collected from this newer Western arm than there was from the original Southern Division arm. This is even with allowing for dramatic increase in flow within the first few years of the Southern Division.

The Western Branch Main Sewer which feeds into the Main Western Carrier was completed in stages all the way through to Strathfield. Work was completed on this sewer in 1904.

The section also contains the Croydon (1922) and Burwood (Strathfield) (1919) concrete vent stacks which were built because of damage caused by gases from the then new Homebush Abattoir after it opened in 1916.

A reinforced concrete vent shaft built in 1919, very similar in design to that at Paisley Road, Croydon. It comprises an octagonal pedestal, at its highest point approximately 5.5m above ground level to the base of a circular shaft in plan with radiating concrete ribs and 2 octagonal concrete bands up the length of the shaft. The capital of the shaft like Paisley Road has neo classical console brackets below a projecting cornice. The entrance door is located on the south east corner with the steel door being original, set into a reinforced concrete projecting frame, whereas Paisley Road is recessed. There is evidence of past patch repair work around numerous areas of the shaft and pedestal, and presently there is evidence of spalling and reinforcement corrosion on the southern wall of the pedestal particularly.

A lightning conductor is located on the south east side of the shaft and the south face of the pedestal.

Iron eyelets are fixed to the circular section of the shaft possibly for a former lightning conductor.

The concrete vent shaft in itself is considerably intact and in fair condition although in need of some maintenance to doors and concrete.

Undertake a conservation plan for the item should the property be proposed for sale.

As at 4 May 2005, the vent shaft is a locally prominent landmark, and one of only two like structures in Sydney Water's system, which plays an important function to the main western sewer system. The unusual design and reinforced concrete construction is rare for this type of vent in a State context.

Burwood Sewer Vent was listed on the New South Wales State Heritage Register on 15 November 2002 having satisfied the following criteria.

The vent has tangible historical associations with the western branch main sewer and through the influence of sewer gases generated from the Homebush abattoir, an element which has now been removed forever.

The vent holds a prominent position on the corner of Wentworth Road and Railway Parade, and is a substantial local landmark.

It is likely the vent stack holds some value to the local community in its function and landmark value.

The vent plays an important function in the servicing of the western branch main sewer.

Regarding its design and construction it is rare on a State level and one of only two in the Sydney Water system.

In terms of vent function alone, it is representative of the function it has played in the operation of sewer systems.

All content from Kiddle encyclopedia articles (including the article images and facts) can be freely used under Attribution-ShareAlike license, unless stated otherwise. Cite this article:
Burwood Sewer Vent Facts for Kids. Kiddle Encyclopedia.