Concord is a suburb in the inner West of Sydney, in the state of New South Wales, Australia. It is 10 kilometres (6.2 mi) west of the Sydney central business district, in the local government area of the City of Canada Bay.

Concord West is a separate suburb, to the north-west.

Concord takes its name from Concord, Massachusetts, in the USA, which was the site of the Battle of Concord, one of the first military engagements of the American Revolutionary War (1775–1778). Some historians believe the Sydney suburb was named Concord to encourage a peaceful attitude between soldiers and settlers. The first land grants in the area were made in 1793.

The original Concord Council was established in 1883. Concord Council amalgamated with Drummoyne Council in 2000 after 117 years of self governance to form the City of Canada Bay. It is also the name of the surrounding parish.

Concord has many parks, including: 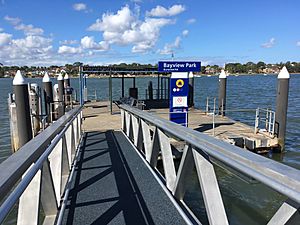 Historically (1901-1948), Concord was also served by a tram line, which connected Mortlake and Cabarita junction, through Majors Bay Road in Concord, to Burwood Road (formerly Wharf Street on the Concord side of Parramatta Road) south to Burwood town centre. From here, the tram line proceeded through Enfield to a depot in resent-day Croydon Park, in Tangarra Street, then east to Ashfield station. The original part of this tram line was built in 1891, from Ashfield to Enfield, and it was extended north to Mortlake in 1901, and a branch to Cabarita Park was built in 1909. The system was electrified in 1912. The line was never connected to any of the other tram lines in Sydney, although its eastern terminus, at Ashfield station, was only one station away (on the main suburban railway line) from the nearest tram terminus at Summer Hill station.

Bus services between Mortlake/Breakfast Point and Cabarita to Burwood (and eventually to Ashfield via Enfield, i.e. routes 464 and 466) follow the old tram lines through the suburb, which were removed in 1948. Few hints of Concord's trams remain today apart from the extra width of Majors Bay Road and Brewer Street in order to accommodate a double track tramway and the existence of Tramway Lane and Cabarita Junction which is where the tram tracks split, with one track providing the Mortlake branch and the other the Cabarita branch.

Notable people who have resided in the suburb have included:

All content from Kiddle encyclopedia articles (including the article images and facts) can be freely used under Attribution-ShareAlike license, unless stated otherwise. Cite this article:
Concord, New South Wales Facts for Kids. Kiddle Encyclopedia.