Concord ( or locally) is a town in Middlesex County, Massachusetts, in the United States. At the 2010 census, the town population was 17,668. The United States Census Bureau considers Concord part of Greater Boston. The town center is located near where the confluence of the Sudbury and Assabet rivers forms the Concord River.

The area which became the town of Concord was originally known as Musketaquid, an Algonquian word for "grassy plain". It was one of the scenes of the Battle of Lexington and Concord, the initial conflict in the American Revolutionary War. It developed into a remarkably rich literary center during the mid-nineteenth century. Featured were Ralph Waldo Emerson, Nathaniel Hawthorne, Bronson Alcott, Louisa May Alcott and Henry David Thoreau, all of whose homes are preserved in modern-day Concord. The now-ubiquitous Concord grape was developed here. 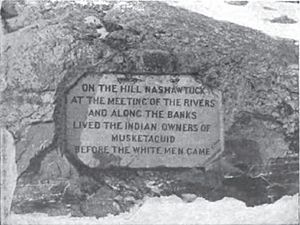 Photo of Egg Rock inscription, about 1900

The area which became the town of Concord was originally known as "Musketaquid", situated at the confluence of the Sudbury and Assabet rivers. The name Musketaquid was an Algonquian word for "grassy plain", fitting the area's low-lying marshes and kettle holes. Native Americans had cultivated corn crops there; the rivers were rich with fish and the land was lush and arable.

In 1635, a group of settlers from Britain led by Rev. Peter Bulkley and Major Simon Willard negotiated a land purchase with the remnants of the local tribe. Bulkley was an influential religious leader who "carried a good number of planters with him into the woods"; Willard was a canny trader who spoke the Algonquian language and had gained the trust of Native Americans. They exchanged wampum, hatchets, knives, cloth, and other useful items for the six-square-mile purchase which formed the basis of the new town, called "Concord" in appreciation of the peaceful acquisition.

Battle of Lexington and Concord

The Battle of Lexington and Concord was the first conflict in the American Revolutionary War. On April 19, 1775, a force of British Army regulars marched from Boston to Concord to capture a cache of arms that was reportedly stored in the town. Forewarned by Paul Revere and other messengers, the colonists mustered in opposition. Following an early-morning skirmish at Lexington, where the first shots of the battle were fired, the British expedition under the command of Lt. Col. Francis Smith advanced to Concord. There, colonists from Concord and surrounding towns (notably a highly drilled company from Acton led by Isaac Davis) repulsed a British detachment at the Old North Bridge and forced the British troops to retreat. Subsequently, militia arriving from across the region harried the British troops on their return to Boston, culminating in the Siege of Boston and outbreak of the war.

The battle was initially publicized by the colonists as an example of British brutality and aggression: one colonial broadside decried the "Bloody Butchery of the British Troops." A century later, however, the conflict was remembered proudly by Americans, taking on a patriotic, almost mythic status ("the shot heard 'round the world") in works like the "Concord Hymn" and "Paul Revere's Ride." In April 1975, the town hosted a bicentennial celebration of the battle, featuring an address at the Old North Bridge by President Gerald Ford. 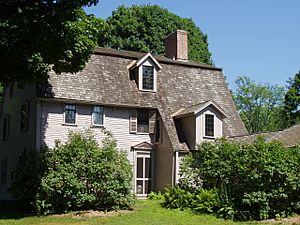 Concord has a remarkably rich literary history centered in the mid-nineteenth century around Ralph Waldo Emerson (1803–1882), who moved to the town in 1835 and quickly became its most prominent citizen. Emerson, a successful lecturer and philosopher, had deep roots in the town: his father Rev. William Emerson (1769–1811) grew up in Concord before becoming an eminent Boston minister, and his grandfather, William Emerson Sr., witnessed the battle at the North Bridge from his house, and later became a chaplain in the Continental Army. Emerson was at the center of a group of like-minded Transcendentalists living in Concord. Among them were the author Nathaniel Hawthorne (1804–1864) and the philosopher Bronson Alcott (1799–1888), the father of Louisa May Alcott (1832–1888). A native Concordian, Henry David Thoreau (1817–1862), was another notable member of Emerson's circle. This substantial collection of literary talent in one small town led Henry James to dub Concord "the biggest little place in America."

Among the products of this intellectually stimulating environment were Emerson's many essays, including Self-Reliance (1841), Louisa May Alcott's novel Little Women (1868), and Hawthorne's story collection Mosses from an Old Manse (1846). Thoreau famously lived in a small cabin near Walden Pond, where he wrote Walden (1854). After being imprisoned in the Concord jail for refusing to pay taxes in political protest against slavery and the Mexican-American War, Thoreau penned the influential essay "Resistance to Civil Government", popularly known as Civil Disobedience (1849). Evidencing their strong political beliefs through actions, Thoreau and many of his neighbors served as station masters and agents on the Underground Railroad. 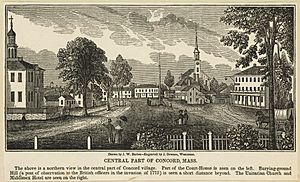 The Wayside house, located on Lexington Road, has been home to a number of authors. It was occupied by scientist John Winthrop (1714–1779) when Harvard College was temporarily moved to Concord during the Revolutionary War. The Wayside was later the home of the Alcott family (who referred to it as "Hillside"); the Alcotts sold it to Hawthorne in 1852, and the family moved into the adjacent Orchard House in 1858. Hawthorne dubbed the house "The Wayside" and lived there until his death. The house was purchased in 1883 by Boston publisher Daniel Lothrop and his wife, Harriett, who wrote the Five Little Peppers series and other children's books under the pen name Margaret Sidney. Today, The Wayside and the Orchard House are both museums. Emerson, Thoreau, Hawthorne, and the Alcotts are buried on Authors' Ridge in Concord's Sleepy Hollow Cemetery.

Concord maintains a lively literary culture to this day; notable authors who have called the town home in recent years include Doris Kearns Goodwin, Alan Lightman, Robert B. Parker, and Gregory Maguire.

In 1849 Ephraim Bull developed the now-ubiquitous Concord grape at his home on Lexington Road, where the original vine still grows. Welch's, the first company to sell grape juice, maintains a small headquarters in Concord. Boston-born Ephraim Wales Bull developed the Concord grape by experimenting with seeds from some of the native species. On his farm outside Concord, down the road from the Emerson, Thoreau, Hawthorne and Alcott homesteads, he planted some 22,000 seedlings in all, before he had produced the ideal grape. Early ripening, to escape the killing northern frosts, but with a rich, full-bodied flavor, the hardy Concord grape thrives where European cuttings had failed to survive. In 1853, Mr. Bull felt ready to put the first bunches of his Concord grapes before the public—and won a prize at the Boston Horticultural Society Exhibition. From these early arbors, fame of Mr. Bull’s (“the father of the Concord grape”) Concord grape spread worldwide, bringing him up to $1,000 a cutting, but he died a relatively poor man. The inscription on his tombstone states, “He sowed--others reaped.” http://www.concordgrape.org/bodyhistory.html

On September 5, 2012, Concord became the first community in the United States to approve a ban on the sale of water in single-serving plastic bottles. The law bans the sale of PET bottles of one liter or less starting on January 1, 2013. The ban provoked significant national controversy. An editorial in the Los Angeles Times characterized the ban as "born of convoluted reasoning" and "wrongheaded." Some residents have stated that this ban will not do much to affect the sales of bottled water, which is still highly accessible in the surrounding areas, and believe that it restricts consumers' freedom of choice. Opponents also consider the ban to represent unfair targeting of one product in particular, when other, less healthy alternatives such as soda and fruit juice are still readily available in bottled form. Nonetheless, subsequent efforts to repeal Concord's plastic bottled water ban have failed in open town meeting. An effort to repeal Concord's ban on the sale of plastic water bottles was resoundingly defeated at Town Meeting. Resident Jean Hill, who led the initial fight for the ban. Town Moderator Eric Van Loon didn't even bother taking an official tally because the opposition to the ban was so overwhelming. It appeared that upwards of 80 to 90 percent of the 1,127 voters at town meeting raised their ballots against the repeal measure. The issue has been bubbling in Concord for several years. In 2010, a town meeting-approved ban, which wasn't written as a bylaw, was rejected by the state attorney generals office. In 2011, a new version of the ban narrowly failed at town meeting, by a vote of 265 to 272. The ban on selling water in polyethylene terephthalate (PET) bottles of one liter or less passed in 2012 by a vote of 403 to 364, and a repeal effort in April failed by a vote of 621 to 687. 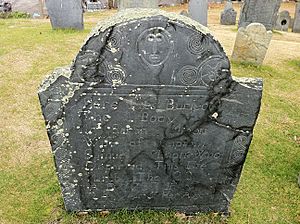 A tombstone in Concord 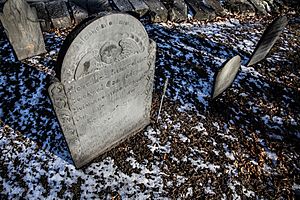 A tombstone in Concord

The town center is located near the confluence of the Sudbury and Assabet rivers, forming the Concord River, which flows north to the Merrimack River in Lowell. Gunpowder was manufactured from 1835 to 1940 in the American Powder Mills complex extending upstream along the Assabet River.

Concord is located in eastern Massachusetts, bordered by several towns: 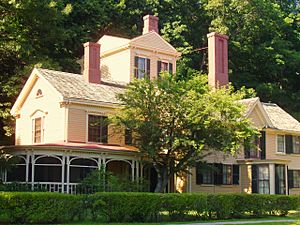 The Wayside, home in turn to Louisa May Alcott, Nathaniel Hawthorne, and Margaret Sidney 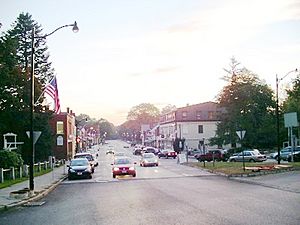 There were 13,090 households of which 37.2% had children under the age of 18 living with them, 65.5% were married couples living together, 7.2% had a female householder with no husband present, and 25.4% were non-families. 22.0% of all households were made up of individuals and 10.4% had someone living alone who was 65 years of age or older. The average household size was 2.62 and the average family size was 3.08.

The town's name is usually pronounced by its residents as KONG-kərd in a manner indistinguishable from the American pronunciation of the word "conquered".

Speakers with a Boston accent often pronounce "Concord" with the in the second syllable replaced by. 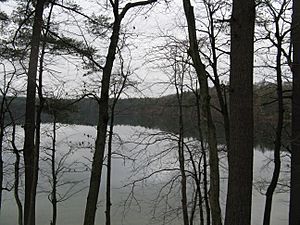 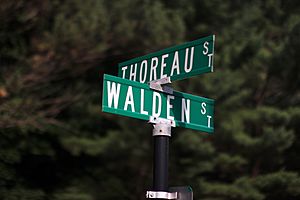 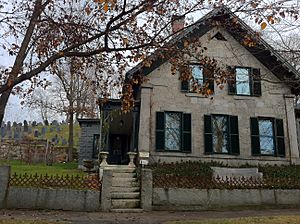 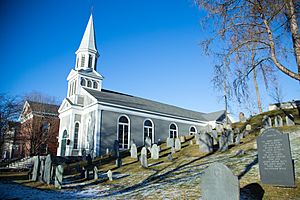 All content from Kiddle encyclopedia articles (including the article images and facts) can be freely used under Attribution-ShareAlike license, unless stated otherwise. Cite this article:
Concord, Massachusetts Facts for Kids. Kiddle Encyclopedia.