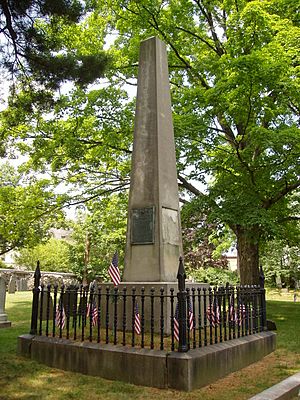 Patriots' Day (so punctuated in several U.S. states, but Patriot's Day in Maine) is an annual event, formalized as several state holidays, commemorating the Battles of Lexington and Concord, and the Battle of Menotomy, the first battles of the American Revolutionary War.

In 1894 the Lexington Historical Society petitioned the Massachusetts State Legislature to proclaim April 19 as "Lexington Day". Concord countered with "Concord Day". Governor Frederic T. Greenhalge opted for a compromise: Patriots' Day. However the biggest battle fought on this day was in the town of Menotomy, now Arlington, Massachusetts. Menotomy was on the Concord Road between Lexington and Concord and Boston. While the fighting was going on in Lexington and Concord, 5,100 militia men arrived in Menotomy from Middlesex and Essex Counties. These men took up positions along the road the British troops would take on their retreat to Boston. They placed themselves in and around houses, stone walls, fields and barns. The bloodiest fighting of the first day of the American Revolution took place inside a single house, the Jason Russell House, in Menotomy. Eleven militia men died in this house fighting British troops trained in bayonet fighting.

Patriots' Day was first proclaimed in Massachusetts in 1894 by Gov. Greenhalge replacing Fast Day as a public holiday. The idea was introduced to the Governor by the statesman from Lowell, Isaac Henry Paige. It was established on April 19, commemorating the date of the Battles of Lexington and Concord and the larger Battle of Menotomy in 1775, and consolidating the longstanding municipal observances of Lexington Day and Concord Day. It also marked the first bloodshed of the American Civil War in the Baltimore riot of 1861, during which four members of the Massachusetts militia were slain and 36 injured. In Menotomy, now Arlington, 25 militia men died and 40 British soldiers were killed. The dual commemoration, Greenhalge explained, celebrated "the anniversary of the birth of liberty and union". It is likely that the battles that took place in Menotomy are not as well known as the smaller battles in Lexington and Concord because the town has had several names since that day in 1775. In 1938, with the generation that had fought in the Civil War largely off the voter rolls, the Massachusetts legislature passed a bill establishing the holiday "in commemoration of the opening events of the War of the Revolution".

Maine followed Massachusetts in 1907 and replaced its Fast Day with Patriot's Day. On June 10, 2017, Governor Dannel Malloy signed a bill establishing Patriots' Day as a statewide unpaid holiday in Connecticut. On April 16, 2018 Connecticut became the 4th state to recognize the holiday.

The holiday was originally celebrated on April 19, the actual anniversary of the battles (fought in 1775). Since 1969, it has been observed on the third Monday in April in Massachusetts and in Maine (which until the Missouri Compromise of 1820 was part of Massachusetts). The Monday holiday creates a three-day long weekend. It is also the first day of a vacation week for public schools in both states and a school holiday for many local colleges and universities, both public and private.

The day is a public school observance day in Wisconsin. Florida law also encourages people to celebrate it, though it is not treated as a public holiday. Connecticut began observance in 2018. 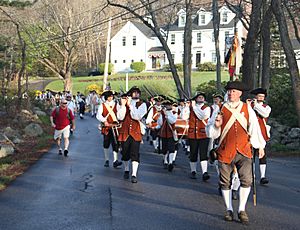 The most significant celebration of Patriots' Day is the Boston Marathon, which has been run every Patriots' Day since April 19, 1897 to mark the then-recently established holiday, with the race linking the Athenian and American struggles for liberty.

The Boston Marathon is run on Patriots' Day every year, since its inception in 1897, even during the World War years. Therefore, sometimes the holiday is referred to as "Marathon Monday".

The Boston Red Sox have been scheduled to play at home in Fenway Park on Patriots' Day every year since 1959. The game was postponed due to weather in 1959, 1961, 1965, 1967, 1984, and 2018, and was canceled in 1995 because of the baseball strike. The game was played in 2013 despite the Boston Marathon bombing because it had finished before the bombs went off. From 1968 to 2006 the games started early, in the morning, around 11:00 am. The early start to these games usually resulted in the game ending just as the marathon is heading through Kenmore Square. However, since 2007 the marathon has started between 9:30 am and 10:00 am, resulting in the racers going through Kenmore towards the middle of the Red Sox game.

All content from Kiddle encyclopedia articles (including the article images and facts) can be freely used under Attribution-ShareAlike license, unless stated otherwise. Cite this article:
Patriots' Day Facts for Kids. Kiddle Encyclopedia.