Mascot is a suburb in south-eastern Sydney, in the state of New South Wales, Australia. Mascot is located 7 kilometres south of the Sydney central business district and is one of the administrative centres of the Bayside Council. Mascot is on the north-west side of Botany Bay and contains Sydney Airport. 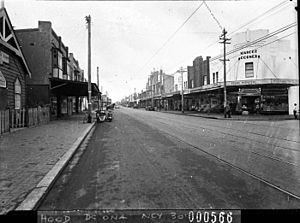 The first land grants in the area were made in 1835, with market gardening being the main land use. Subdivision followed the construction of Botany Road in 1875 and a municipality known as North Botany was formed in 1888. A racecourse operated in this area in 1904 on land that was formerly owned by the Australian Golf Club. The race course was known as Ascot, named after its famous counterpart in England. Residents wanted the area to have an individual identity and a referendum was held in 1911 to choose between Ascot, and Booralee. An objection from the postal authorities to the use of 'Ascot' led the council to alter the name to Mascot.

In 1920, Mascot was chosen as the site of a public airfield. Nigel Love was leasing 200 acres (0.81 km2) from the Kensington Race club and in 1921 the Commonwealth Government purchased 161 acres (0.65 km2) for this purpose. The first regular flights began in 1924. Cooks River was diverted away from the area in 1947-52 to provide more land for the airport.

The suburb is served by three railway stations on the Airport Line. Mascot railway station is located in the residential and business area of the suburb. The International and Domestic railway stations are situated below the respective terminals of the airport. The Sydenham to Botany branch of the Metropolitan Goods railway line passes through the suburb and includes a yard in Mascot.

Recent improvements to Kingsford-Smith Airport have resulted in the creation of a bicycle path between Mascot (Coward Street) and the M5 East Freeway at Arncliffe. Other bike paths pass through Mascot to Botany Bay, the University of New South Wales and the Sydney CBD.

At the 2011 census, the population of Mascot was 10,179. 48.4% of the population was born in Australia. The three strongest religious affiliations in the area were in descending order: Catholic, Greek Orthodox Church and Anglican. The three most common forms of dwelling were in decreasing order: a separate house; a flat, unit or apartment; a semi-detached, row or terrace house, or townhouse.

All content from Kiddle encyclopedia articles (including the article images and facts) can be freely used under Attribution-ShareAlike license, unless stated otherwise. Cite this article:
Mascot, New South Wales Facts for Kids. Kiddle Encyclopedia.