St Peters is a suburb in the Inner West of Sydney, in the state of New South Wales, Australia. It is 7 kilometres south of the Sydney central business district, in the local government area of Inner West Council.

St Peters was named by its association with St Peters Anglican Church, which was consecrated in 1838. St Peters is the third oldest Anglican church in Sydney and has been claimed to be the first church built in Australia using non-convict labour. The church is on the Princes Highway. It was designed by Thomas Bird and built in 1838-39. In 1875, alterations were carried out under the supervision of Edmund Blacket. The church is now listed on the Register of the National Estate. The graveyard is the burial place of a few notable people, including Frederick Wright Unwin, who had Unwin Road and Unwin Bridge named after him. It is also the burial place of people who committed suicide, patients of the Bayview Mental Asylum at Tempe, and victims of unsolved murders. Graveyard history tours are conducted monthly.

In 2009, the church was given a grant of $30,000 from the State Government, for carrying out much-needed renovations. The grant was aimed at repairing cracked walls and sealing windows. Pastor Shane Rogerson said the building was "ill-fated from the beginning" because it was built on clay-based soil, which meant it will always have problems with cracking.

The first large land grant in the area was made in 1799 to Provost-Marshal Thomas Smyth. His 470 acres (1.9 km2) stretched from the Cooks River to the present Campbell Street. After his death in 1804, the land was acquired by Robert Campbell (1769–1846), a wealthy merchant who built some of the early warehouses along the Sydney Cove waterfront.

Alexander Brodie Spark (1792–1856), was a wealthy merchant who named the suburbs of Tempe after his mansion Tempe House that he built at what is now Wolli Creek and the suburb of St Peters that developed around the church. Barwon Park House was a large residence erected by Spark in 1815 on land leased from Robert Campbell and was demolished in 1953. He sold his property in 1830 but reserved land for the church. St Peters was described in the 1840s as one of the most fashionable and aristocratic suburbs of Sydney. 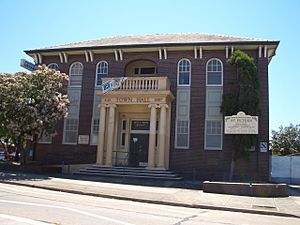 St Peters was a separate municipality from 1871 to 1949 but now falls under the governance of Inner West Council. The town hall in Unwins Bridge Road was built in 1927 and now houses the St Peters branch of Marrickville Library and acts as a small community centre. The railway station opened on 15 October 1884 and the post office opened in October 1851.

In recent years, St Peters has become home to one of the largest concentrations of New Zealanders in Australia.

In the 1870s, St Peters was an important brickmaking centre with a large brickworks on the site now known as Sydney Park, on the corner of Mitchell Road (now Sydney Park Road) and the Princes Highway, close to St Peters railway station. The brickworks closed after World War II and for most of the 1960s and 1970s the site was used as a rubbish tip with the vast clay pits eventually filled by domestic and commercial refuse. After the tip closed in the 1980s, Sydney Park was created on the site. The area was covered, landscaped and revegetated so that several large artificial hills were created with sweeping views south to Botany Bay and north to the city. Four towering chimneys that carried exhaust from the brick kilns remain standing and have been incorporated into the Sydney Park site along with some of the kilns and various pieces of large brickworks machinery. The remains of the brickworks were heritage-listed.

The Princes Highway is a major arterial road in southern Sydney. It has its origins in St Peters at the intersection with King Street and Sydney Park Road. Also located at this intersection is St Peters railway station which is served by trains on the Bankstown Line of the Sydney Trains network. City-bound trains arrive approximately every fifteen minutes in peak hour, and take about seven minutes to reach Central station. Sydney Buses service St Peters with the Tempe-bound 422 from Circular Quay and the Coogee-bound 370 from Leichhardt.

All content from Kiddle encyclopedia articles (including the article images and facts) can be freely used under Attribution-ShareAlike license, unless stated otherwise. Cite this article:
St Peters, New South Wales Facts for Kids. Kiddle Encyclopedia.