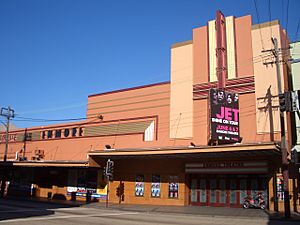 The Art Deco style of the Enmore Theatre, Enmore Road

Enmore is a suburb in the Inner West of Sydney, in the state of New South Wales, Australia. Enmore is located 5 kilometres south-west of the Sydney central business district and is part of the local government area of Inner West Council.

Enmore was named after Enmore House, built in 1835 by Captain Sylvester Browne, a master mariner with the British East India Company. Browne named his house after the Guyana estate of a business associate, the head of James Cavan & Co, which in turn took its name from Enmore in Somerset, England. Browne's son wrote several Australian classics, including Robbery Under Arms, under the name of Rolf Boldrewood.

In 1836, there was a report of snowfall in the suburb. Weather observer T.A Browne stated, "the years 1836, 1837 and 1838 were years of drought, and in one of these years [1836] a remarkable thing happened. There was a fall of snow; we made snowballs at Enmore and enjoyed the usual schoolboy amusements therewith".

Enmore House was the home of the Josephson family from 1842 to 1883, when it was demolished. After Josephson's death, his son Joshua Frey Josephson lived there until 1883. Joshua Frey Josephson had four sons and nine daughters from three marriages. One son, Joshua Percy Josephson, was Mayor of Marrickville in 1901. Five streets are named after five of the daughters: Clara, Laura, Marian, Pearl and Sarah.

The house at 75 London Street is listed on the Register of the National Estate. It was built circa 1900 and stands out as a notable example of the Federation Queen Anne style, with elaborate Art Nouveau elements.

At the 2011 census, there were 3,572 residents in Enmore. 59.6% of people were born in Australia. The most common other countries of birth were England 4.9%, New Zealand 2.9% and Greece 2.5%. The top responses for religious affiliation were No Religion 42.4%, Catholic 16.5% and Anglican 7.4%. Major industries of employment in Enmore included Tertiary Education 5.6%, Hospitals 4.6%, Cafes, and Restaurants and Takeaway Food Services 3.5%. The most common dwelling type in Enmore was semi-detached, row or terrace houses, townhouses etc. (51.1%). 47.2% of people were renting their home and this was considerably higher than the national rate of 29.6% for renting.

All content from Kiddle encyclopedia articles (including the article images and facts) can be freely used under Attribution-ShareAlike license, unless stated otherwise. Cite this article:
Enmore, New South Wales Facts for Kids. Kiddle Encyclopedia.