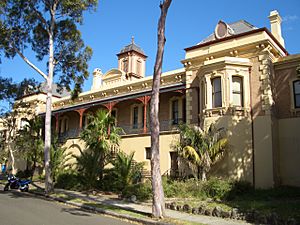 Petersham is a suburb in the Inner West of Sydney, in the state of New South Wales, Australia. Petersham is located 6 kilometres south-west of the Sydney central business district, in the local government area of Inner West Council. Petersham is known for its extensive Portuguese commercial offerings, with many Portuguese businesses and restaurants, although only 156 (1.9%) of the population was actually born in Portugal.

Petersham is bordered by the suburbs of Leichhardt to the north, Stanmore to the east, Marrickville to the south and Lewisham to the west. Taverner's Hill, named after Fred Taverner, is a locality in the western part of the suburb.

Major Francis Grose sent workmen to the area in 1793 to clear the bush and plant corn and wheat. He named the area Peters-Ham or Petersham after his native village in Surrey, England. Kangaroo hunting was also popular in the area. The name was also used for the surrounding parish.

Dr Robert Wardell (1793–1834) purchased land from many grantees in the district and in 1831 his estate eventually stretched 2,000 acres (8.1 km2) from Petersham to the Cooks River. Following his murder by escaped convicts in 1834, the estate was subdivided. The train line from Sydney to Parramatta opened in 1855 and trains stopped here from 1857. A platform was built in 1863. The original Petersham post office became Annandale in 1855. Another post office opened as Norwood in May 1860 and was moved to Petersham station in 1870. The first public school opened in 1878.

Petersham municipality was incorporated in 1872. The local council merged with Marrickville and St Peters in 1948 to form the Municipality of Marrickville. In 1916, the Boys' section of Fort Street High School moved to Petersham from Observatory Hill, followed by the Girls' section in 1975.

Mosquito HR576 RAF (UK) disintegrated over the inner western Sydney suburbs of Leichhardt and Petersham on 2 May 1945 during an air test flight. The crew of two were killed but fortunately no one on the ground was seriously injured by the falling debris of the Mosquito. The Daily Telegraph of 3 May 1945 stated that two civilians were injured and a total of 18 properties were damaged. Five houses were set on fire by the falling debris.

It was suspected that a violent pull out from a power dive, with its associated high 'g' forces may have led to the structural failure of the aircraft. The two crew members tried to escape from the aircraft but they were not high enough for their parachutes to open. Flight Lieutenant David Rochford of Oxford, England and LAC Charles Boydell from Mosman were both killed. Flight Lieutenant Rochford's body was found in the playground of Petersham Public School while LAC Boydell's body was found on the roof of a railway building about 100 metres away.

Petersham railway station is on the Inner West & Leppington Line of the Sydney Trains network. Travelling west, all stations services run from the City Circle to Homebush and Parramatta. The station includes an ornate iron pedestrian bridge over the train line. The old station building was built in 1886 in the Victorian Free Classical style. It has been described as "the largest and grandest of the surviving 19th century railway stations in the Sydney area", and is listed on the Register of the National Estate.

Petersham's houses are predominantly terrace houses, similar to those of Summer Hill and Stanmore on the north side of the railway station near Parramatta Road.

The suburb has a high number of persons born in Southern Europe, most particularly Portugal (2.0%) and also Italy (1.5%) and Greece.

Local events include the annual Audley Street festival, which is a celebration of the suburb's Portuguese ties. Petersham is also home to the Petersham Bowling Club and Petersham RSL Club.

According to the 2016 census of Population, there were 8,116 people in Petersham.

All content from Kiddle encyclopedia articles (including the article images and facts) can be freely used under Attribution-ShareAlike license, unless stated otherwise. Cite this article:
Petersham, New South Wales Facts for Kids. Kiddle Encyclopedia.