Summer Hill is a suburb of Sydney, in the state of New South Wales, Australia. Summer Hill is located 8 kilometres west of the Sydney central business district, in the local government area of the Inner West Council.

Summer Hill is a primarily residential suburb of Sydney's Inner West, adjoining two of Sydney's major arterial roads, Parramatta Road and Liverpool Road. The first land grant was made in 1794 to former convict and jailor Henry Kable, and the suburb began growing following the opening of the railway station on the Main Suburban railway line, in 1879.

By the 1920s, the suburb had become relatively upper class, with large estates and mansions built throughout the suburb. Some of these still exist today. Following a transition to a working-class suburb in the mid-20th century, when many of the large estates were demolished or subdivided, the suburb today has a "village" character and a mix of medium-density apartment blocks and federation houses. 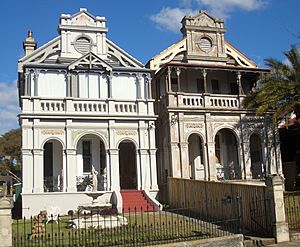 Summer Hill's boundaries are Parramatta Road and Liverpool Road to the north, the rear of the properties on the west side of Prospect Road (with a detour around Trinity Grammar School) to the West, Old Canterbury Road to the south, and the Inner West Light Rail to the east. North of Summer Hill is the suburb of Haberfield, to the east is Lewisham, to the south is Dulwich Hill, and to the west is Ashfield.

Summer Hill has a mix of Federation-era houses, with medium density apartment blocks near the railway station. Local independent business people run most of the shops. The local council has defined a village character for the suburb. Summer Hill is a suburb rich in heritage. More than one hundred properties are heritage listed, and the strong feelings of some residents of the suburb towards protecting the local architecture has seen the introduction of a heritage review, which is expected to add more properties to the heritage register.

Despite formerly being working class, Summer Hill and many of the surrounding suburbs have gradually undergone gentrification over recent years. Culturally, Summer Hill is a blend of medium-density European Sydney suburbia, with Italian influences (which are most evident in Leichhardt to the east and Haberfield to the north), Asian (mainly Chinese) influences (which are most strongly evident in Ashfield to the West), and smaller influences from many other cultures.

Before the First Fleet arrived at Port Jackson in 1788, what is now known as Summer Hill was part of a larger area where people of the Wangal and Cadigal tribes hunted, fought, and lived. There is research to show in the greater Sydney region 8000 - 10000 aborigines were resident, fluctuating on seasons and during tribal conflicts. What is now called the Hawthorne Canal (originally Long Cove Creek) appears to have been the boundary between the Cadigal and Wangal aboriginal group lands. Today there is a small park in Summer Hill, called Cadigal Reserve, located at 1-4 Grosvenor Crescent. A bronze plaque placed by Ashfield Council names the reserve after the Cadigal (Eora) group of Koori people. Iron Cove and the mangrove-lined estuaries of the Long Cove and Iron Cove Creeks would have provided a good source of fish and molluscs, the most common food of the coastal tribes in the Sydney basin.

In the early days of the colony, the land between Iron Cove and the Cook's River was known as the Kangaroo Ground. This suggests that the land was open terrain favoured by kangaroos, that they were common in the area and may have formed a significant part of the Aboriginal diet. 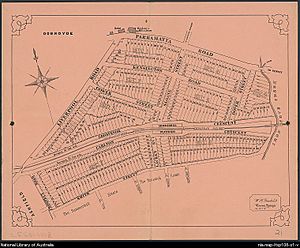 1878 subdivision plan covering the northern half of the suburb. 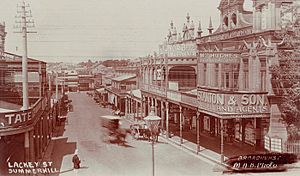 The first land grant in this area was for a farm in 1794, to former convict and jailor Henry Kable. The land in the eastern corner of Summer Hill was an additional grant of 30 acres (12 ha) made to Henry Kable in 1804. This eastern corner would subsequently become part of the estate of James Underwood. Underwood died in 1844 and left a will so complicated that it required special legislation before it could be subdivided.

The earliest known use of the name "Summer Hill" was in 1876, for a land subdivision adjacent to the present-day St Andrew's Anglican Church. The name Summer Hill is thought to be a name chosen by the land sub-divider, presumably based on an attachment for England. Local historians regard the suggestion that the name is a derivation of "Sunning Hill" as a dubious story which has no substance.

Summer Hill's largest mansion, Carleton (now the Grosvenor Hospital's main building), was built in the early 1880s on Liverpool Road for Charles Carleton Skarrat. The suburb boomed with the opening of the railway station in 1879, and was followed by subdivision of much of the surrounding area. Between 1880 and 1910, the area became an upper-class suburb, and was a popular choice for professionals in banking and insurance who worked in the city. Subdivision of gardens for housing continued in the 1920s and 1930s, and socioeconomically the suburb changed as some of the wealthier inhabitants moved to the North Shore. Demolition of most of the surviving mansions in the 1970s allowed erection of home units, especially within walking distance of the railway station.

Churches and other places of worship 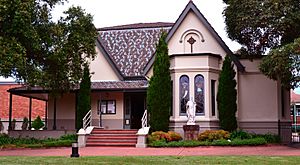 There are a number of places of worship in Summer Hill. St Patrick's Catholic Church was built in 1874, and is the oldest known building in the suburb. There is also a small primary school associated with the church and located next to it. 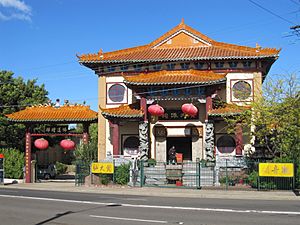 The building was originally a private home known as Kelvin Grove, and owned by Mrs Jane Drynan. Much of the exterior of the church is original but none of the internal walls were retained when the building was converted into a church. Following Drynan's death, Kelvin Grove was owned or leased by a succession of different people, including the Haberfield real-estate developer Richard Stanton, Croydon brick-maker William Downton, and two sisters named Freeman (one of whom was a nurse). In the 1920s and 1930s Kelvin Grove may have been used as a nursing home. The first mass was celebrated in Kelvin Grove on St Patrick's day 1946, giving the church its name.

St Andrew's Anglican Church has three distinctive internal transept arches, and was designed by a Presbyterian, Alexander Leckie Elphinstone Junior. The foundation stone was laid in 1883, and the top of the spire completed in 1906. The fast construction period, unusual for that time, was indicative of the area's affluence. Recent Asian influences in Summer Hill have brought about the introduction of non-Christian places of worship. The Wong Tai Sin (or Kwan Yin Kur) temple is located on the corners of Kensington Road and Liverpool Road in a building that was a Masonic temple in the 1920s. The same building was converted into the current temple; the lower floor houses the Taoist deity of Wong Tai Sin, and the upper floor houses the Buddhist Bodhisattva of Kwan Yin.

In the 2011 census, for people travelling to work from this suburb, 34% travelled in a car as the driver, 34% took the train, 5% walked, 4% took the bus and train and 3% took the bus. Summer Hill is close to the main thoroughfares of Liverpool Road and Parramatta Road; although they are quite congested at peak times.

From 1915, Summer Hill was served by trams from Hurlstone Park. Trams left New Canterbury Road and went down Prospect Road, then swung right onto Smith Street. They turned onto Lackey Street, where they went right and terminated at the station. Low usage and rival buses saw the line closed in 1933, however some remains can be seen. 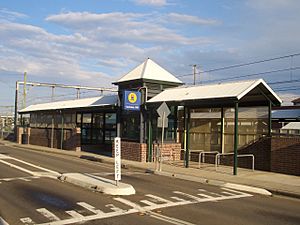 There are two stations serving Summer Hill on the Dulwich Hill Line of Sydney's light rail network. These are - Lewisham West (adjacent to the former flour mill on the border with Lewisham) and Taverners Hill (near Parramatta Road). Access to the city is quicker by train, but the light rail may be used for some cross-regional journeys. It also interchanges with Dulwich Hill railway station on the Bankstown Line.

The area is also gradually becoming more bicycle friendly, with several bicycle paths in the suburb. A local group, "Friends of the Greenway" wish to see a bicycle and walking corridor built alongside the light rail. 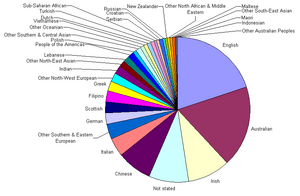 Ancestry as determined by birthplace of parents

Notable people to have been born or lived in Summer Hill include:

On April 14, 2013, in response to the removal of the Rainbow Crossing in Oxford St, Darlinghurst, parents and children from several local schools chalked a rainbow in the public square at Summer Hill, as part of the DIY Rainbow Crossing movement. 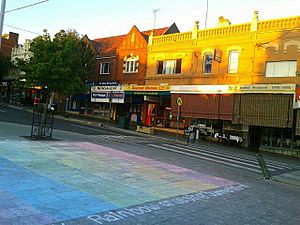 On April 15, 2013, Ashfield Council workers removed the rainbow. After media attention, council issued a statement labelling it a slip hazard and requested a permit be obtained before it could be re-chalked. The events were covered in The Daily Telegraph, The Australian, Perth Now, and on 2DAY FM.

On April 17, 2013, it was rechalked by more than 100 people, including local councillor, Alex Lofts. On April 18, it was again removed, only to be re-chalked. Since that date it has remained chalked. A group of families and supporters continue to chalk the rainbow, especially after rain. This group has also ensured the area remains free of litter; they also hold occasional performances and arts-related celebrations at the site. Some local businesses have offered discounts and support for the rainbow, these display a logo with a stylised image of the rainbow crossing on it.

At an Ashfield Council meeting on 28 May 2013 the council passed a motion that a permanent outline of a rainbow be painted in Summer Hill Square, with the understanding that this may be periodically 'chalked in' by children, families and community members.

All content from Kiddle encyclopedia articles (including the article images and facts) can be freely used under Attribution-ShareAlike license, unless stated otherwise. Cite this article:
Summer Hill, New South Wales Facts for Kids. Kiddle Encyclopedia.