Haberfield sits south of Iron Cove, which is part of Sydney Harbour. It is bounded to the east by the Hawthorne canal, to the northwest by the Iron Cove Creek canal and to the southwest by Parramatta Road. Its main road is Ramsay Street and the point of land that faces Iron Cove, Dobroyd Point, is a historical locality of Sydney. Haberfield was dubbed "the garden suburb" in the early 20th century and retains its well-kept parks, tree-lined streets and fine Federation-era houses with immaculate gardens. The entire suburb is heritage-listed. It is also known for its Italian culture.

Haberfield was named by early landholder Richard Stanton, after his wife's maiden name.

The area of which is now known as Haberfield was part of the broader area which lived people from the Darug tribe known variously as the Wangals or Cadigals from the Eora nation. There is no specific evidence of indigenous settlement in the area. However, the area that is now Haberfield was one of the last areas in the inner-west to be developed so, in the late 19th century it again became a home to local kooris.

Nicholas Bayly, a soldier, received the first land grant in the area in 1803 but sold it two years later to Simeon Lord who called it Dobroyde Estate. Lord gave the land to his daughter Sarah Ann and her new husband David Ramsay as a wedding present in 1825 and it stayed in the hands of the Ramsay family until the end of the century. The Ramsays developed orchards in the area and built a number of fine houses for various members of the family including Yasmar (Ramsay spelt backwards) and St David's Presbyterian church. They also created four of the suburb's current streets: Ramsay Street, Dalhousie Street (named after the Ramsay's historic home in Scotland), Boomerang Street and Waratah Street. 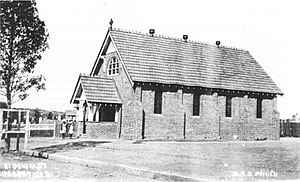 The nave of St Oswald's was built soon after subdivision of the suburb, and the Anglican parish divided from that of St John's Ashfield.

In 1901, landholder Richard Stanton bought 50 acres (200,000 m2) from two Ramsay children and subdivided the area to create a garden suburb. Sydney had recently suffered outbreaks of the bubonic plague in overcrowded parts of the inner city and the garden suburb movement was a response to that, encouraging fresh air. He also claimed the development to be "slumless, laneless and publess". The houses were designed by the architectural firm Spencer, Stansfield and Wormald. Stanton named the suburb 'Haberfield', after the English branch of his family. The fact that the development started in 1901 and a number of the early streets were named after prominent federal politicians has led to the suburb also being known as 'The Federation Suburb'.

The majority of houses in Haberfield are protected under a 'heritage order', which is the main reason why so many original Victorian and Federation houses still exist in the area. Renovations and additions to both houses and properties must follow strict guidelines ensuring they stay true to the era's style. Some examples of rules include: banning the addition of second storeys unless in the existing roof space, banning the demolishing of any protected houses, ensuring a 50:50 ratio of 'hard surface' to 'soft surface' on the property, ensuring house exteriors are painted in federation colours. Houses must also have a roof consisting of terracotta or slate tiles.

One notable landmark is Yasmar, at 185 Parramatta Road. Formerly known as Yasmar Hotel, this building was built circa 1870 of dressed stone, with a verandah and iron columns. It also features French windows and extensive cedar joinery, and is set in a lush garden. It is now part of Yasmar Juvenile Centre and is listed on the Register of the National Estate.

A proposal was made by McDonald's to build a drive-thru outlet on Parramatta road in Haberfield. This was fiercely opposed by most local residents who want to preserve the suburb's unique cultural heritage. The development application was rejected by Ashfield Council, however McDonald's appealed to the NSW Land and Environment Court and a final judgement indicates that, subject to some changes to the plans, a 12-month trial has been granted for a 24/7 restaurant.

Since the opening of McDonald's in Haberfield, there have been complaints about odours coming from the site. 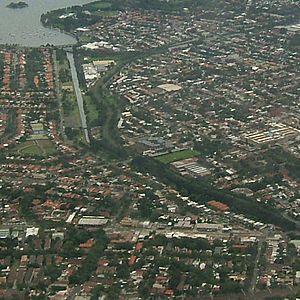 The Dulwich Hill Line of Sydney's light rail network - a converted freight railway line - skirts the suburb's eastern border with Leichhardt. Because of this, none of the three stops serving Haberfield are centrally located within the suburb. Hawthorne (near Barton Ave) and Marion (near Marion St) are the primary stops serving Haberfield. Taverners Hill (near Parramatta Road) is in the south-east corner of the suburb at the southern border with Summer Hill and the south-eastern border with Lewisham, in addition to the border with Leichhardt. The service offers a direct link to Pyrmont and Darling Harbour and provides interchanges with Lewisham railway station on the Airport, Inner West & South Line and Dulwich Hill railway station on the Bankstown Line. Sydney Buses operates routes 461 (from the city down Parramatta Rd), 406 (from either Five Dock or Hurlstone Park through Dalhousie St), 438 (from city or Abbotsford via Ramsay St) and 439 (from city or Mortlake via Ramsay St).

At the 2011 census, there were 6,650 residents in Haberfield. The population was older than average, with a median age of 44 and with 20.9% of people aged 65 and over. 35% of people were born outside of Australia. The suburb's largest foreign-born population is made up of its Italian-born residents, making up 14.6% of the population. The suburb is greatly influenced by Italian culture, but is home to many ethnic and cultural groups. The next largest country-of-birth is England at 2.9% and New Zealand at 1.5%. The most common responses for religion in the census were Catholic 50.0%, No Religion 18.8%, Anglican 9.0%, Eastern Orthodox 3.5% and Uniting Church 2.8%. Most people spoke only English at home and the most common other language spoken at home was Italian (23.1%).

The following people were either born in, or lived in, Haberfield:

About 1500 houses were constructed in this and adjoining areas to designs by architects J Spencer Stansfeld and D Wormald, to Federation or Bungalow styles.

Haberfield espoused the philosophy of the Garden Suburb with its gardens containing distinctive planting, fences, gates and curving tiled paths. Houses in Haberfield were typically 'detached' double-brick dwellings situated on their own block of land measuring 50' x 150' (15 m x 45 m). No two houses were alike, although there were many common themes throughout the suburb. The roofs were either slate or Marseilles tile. All had front verandahs. Decorative features typically used in this area include leadlight windows depicting Australian flora and fauna, Art Nouveau timber detailing and tuckpointed brickwork.

All content from Kiddle encyclopedia articles (including the article images and facts) can be freely used under Attribution-ShareAlike license, unless stated otherwise. Cite this article:
Haberfield, New South Wales Facts for Kids. Kiddle Encyclopedia.