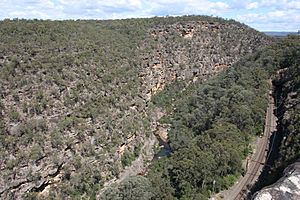 Glenbrook is a township of the Lower Blue Mountains of New South Wales, Australia. It is located 63 kilometres west of Sydney in the local government area of the City of Blue Mountains. At the 2016 Australian census Glenbrook had a population of 5,051 people.

Glenbrook lies between Lapstone and Blaxland at an elevation of 163 m (535 ft) and is approximately a 50-minute drive from Sydney. It plays host to trendy cafes and boutiques, while offering various tourist attractions, including weekend markets, recreational opportunities and native flora and fauna.

The town takes its name from Glenbrook Creek, which is on the southern side of the village and must be crossed to enter the Blue Mountains National Park. Glenbrook retains many historical homes and buildings throughout the village, although most homes are occupied and not open to the public.

Glenbrook took its name from Glenbrook Creek but was originally known as Watertank, when a stop opened here on the original "little" zigzag railway line. A pipe-line brought water from Glenbrook Lagoon to a tank beside the line, from which the engines could be refilled. The Lagoon itself had been dammed up to hold more water for the trains. Around 1870, a small loop siding was built for trains to pass each other and the name was changed to Wascoe's Siding, referring to its connection with the railway stopping point of Wascoe (now Blaxland). In 1878, Sir Alfred Stephen, Chief Justice and Privy Councillor, decided to give the station a proper name and called it Brookdale, "because the place was well watered". One year later, amid a general renaming, the station was given the name of the nearby creek, Glenbrook, which Sir John Jamison thought came from Regents Glen. When the village was officially proclaimed, six years later, it took the name of the station.

The little zigzag opened near Glenbrook in 1867, a part of the ascent of Lapstone Hill on a gradient of 1 in 30–33, which was built up the side of the range with comparatively light earthwork, although it includes the substantial seven-span sandstone Knapsack Viaduct. This was later widened to carry the old Great Western Highway, when the deviation around the little Zig Zag was built, but it is now part of a walking trail on the old railway/highway alignment, including a memorial to the engineer in charge of the construction of the Blue Mountains line and many other early railways, John Whitton. The abandoned Glenbrook tunnel was used to store mustard gas during World War II. On 28 January 1941, an Avro Anson of No. 1 Air Navigation School, Parkes crashed near Glenbrook during a medical evacuation flight from Parkes to the Sydney Airport. All five crew members were killed.

Lennox Bridge built in 1833 and designed by Scottish stonemason David Lennox is the oldest surviving stone bridge on the Australian mainland. In 1999, the town was associated with the Glenbrook train disaster. Since 2005, the suburb has been the home of The Australian Gnome Convention organised by the local Rotary Club and held on Australia Day each year. Owners of garden gnomes display their garden decorations and compete for various awards to raise funds for charities.

Glenbrook railway station is on the Blue Mountains Line of the NSW TrainLink intercity network. Also, the Great Western Highway passes through the town.

All content from Kiddle encyclopedia articles (including the article images and facts) can be freely used under Attribution-ShareAlike license, unless stated otherwise. Cite this article:
Glenbrook, New South Wales Facts for Kids. Kiddle Encyclopedia.