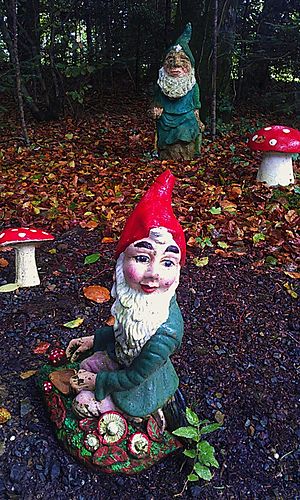 The first garden gnome was created in Switzerland. It was later introduced to the United Kingdom in 1847 by Sir Charles Isham, when he brought 21 terracotta figures back from a trip to Germany and placed them around the gardens of his home at Lamport Hall in Northamptonshire. Only one of the original batch of gnomes survives: Lampy as he is known, is on display at Lamport Hall, and is insured for one million pounds.

Garden gnomes have become a popular accessory in many gardens, but they are not loved by all. They can be the target of pranks. People have been known to "return to the wild" these garden gnomes, most notably France's "Front de Liberation des Nains de Jardins" and Italy's "MALAG" (Garden Gnome Liberation Front). Some kidnapped garden gnomes have been sent on trips around the world, being passed from person to person and photographed at different famous landmarks, with the photos being returned to the owner. This practice is featured in the 2001 French film, Amélie and in an advertising campaign for Travelocity.com . Non-conventional gnome statues have also been made, such as a flashing gnome in a raincoat, or a gnome couple in love.

A sub-culture exists among those who collect garden gnomes. This phenomenon is frequently made fun of in popular culture.

All content from Kiddle encyclopedia articles (including the article images and facts) can be freely used under Attribution-ShareAlike license, unless stated otherwise. Cite this article:
Garden gnome Facts for Kids. Kiddle Encyclopedia.