Katoomba is the chief town of the City of Blue Mountains in New South Wales, Australia, and the administrative headquarters of Blue Mountains City Council. Katoomba is situated on the Great Western Highway 102 km (63 mi) west of Sydney and 39 km (24 mi) south-east of Lithgow. Katoomba railway station is on the Main Western line.

Katoomba is a base for bush and nature walks in the surrounding Blue Mountains. At the 2016 census, Katoomba had a population of 7,964 people.

Kedumba or Katta-toon-bah is an Aboriginal term for "shining falling water" or "water tumbling over hill" and takes its name from a waterfall that drops into the Jamison Valley below the Harrys Amphitheatre escarpment. Previously, the site was known as William's Chimney and Collett's Swamp. In 1874 the locality was named The Crushers after the name of the railway station that served a nearby quarry. The name Katoomba was adopted in 1877 and the town achieved municipality status in 1889.

Katoomba and nearby Medlow Bath were first developed as tourist destinations towards the end of the 19th century when a series of hotels were built and then repeatedly extended.

Coal and shale mining was also carried out in the Jamison Valley for many years, but when the seams were completely exhausted by the early 20th century, Katoomba was an established resort town. By the 1960s, Katoomba had somewhat declined, and several of its guest houses were converted for other purposes including convalescent hospitals. Some succumbed to arson.

In the 1980s, the guest houses and hotels again became fashionable and many were restored to their former glory. Housing in the Katoomba region has become more expensive, but in general housing prices in the district are still markedly lower than those in the Sydney Metropolitan area. Tourism to the area has increased significantly since 2010. 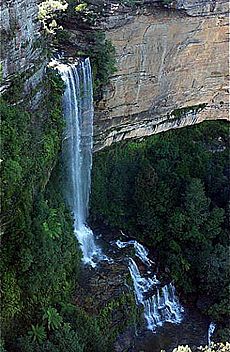 Katoomba Falls on the Kedumba River.

Katoomba's main industry is tourism based on its mountain scenery. The rock formation known as the Three Sisters, viewable from Echo Point about 2 kilometres (1.2 mi) south of the main town, attracts four million visitors each year. Other features of the Jamison Valley visible from Echo Point include Mount Solitary and the rock formation known as the Ruined Castle. A short walk from Echo Point leads to The Giant Stairway which provides access to a number of nature walks through the Valley. Several of the Jamison Valley tracks including the Stairway itself were closed in recent years due to maintenance, but most have since been re-opened. The local geography includes extensive areas of dense warm temperate rainforest, hanging swamps and a series of waterfalls.

Other attractions include Scenic World, a tourist complex in the southwest of the town. This site is home to the steepest funicular railway in the world, the Katoomba Scenic Railway, which was originally built to facilitate coal and oil shale mining in the Jamison Valley. Scenic World also offers the Scenic Skyway cable car, which travels over an arm of the Jamison Valley and offers views of Katoomba Falls and Orphan Rock. In 2004 the original Skyway car was replaced by a new car with a liquid crystal panel floor, which becomes transparent while the car travels. In 1983 construction began at the site on a rollercoaster called the Orphan Rocker; the track was completed, but this attraction has never been opened to the public.

Katoomba is served by hotels and guest-houses, the oldest of which is the Carrington Hotel, established in 1882 and occupying the highest point in town. The town centre, centered on Katoomba Street, features dozens of cafes and restaurants, including the Paragon which dates to the early 20th century, as well as a number of second-hand book and antique stores.

Katoomba has a subtropical highland climate (Cfb) with mild summers and cool winters. At Katoomba (1040 metres above sea level) summer daytime temperatures are usually in the low 20s, with a few rare days extending into the 30s (Celsius). Night-time temperatures are usually in the low teens. In winter the temperature is typically about 10 °C in the daytime with 0 °C or so on clear nights and 3 to 4 °C on cloudy nights. There are usually two or three settled snowfalls per year. Katoomba is quite wet all year round; the annual rainfall is about 1,400 millimetres (55 in) with many misty days. Temperatures are on average 7 °C lower than Sydney. Katoomba has 79.8 days of clear skies, annually.

The Blue Mountains has a reputation for snow in winter. However, despite the cool temperatures, there are only around five snowy days per year in the upper mountains area. It is extremely rare to see snow below Lawson. It is not unusual to see white blankets of frost covering the ground in the early morning hours. In the evening, thick coverings of ice can form on car windscreens.

Several significant snowfalls have been recorded. On 5 July 1900, snowdrifts were over 6 feet (1.8 metres) deep in parts of the Blue Mountains. The snow and ice caused significant problems throughout central New South Wales, with rail and road closures, damage to buildings, and disruption to telegraph services. A winter storm on 18 July 1965 also produced very heavy snow and ice in the area, with damage to buildings and major difficulties with road and rail transport. 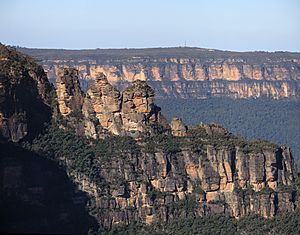 The Three Sisters, on the south edge of Katoomba 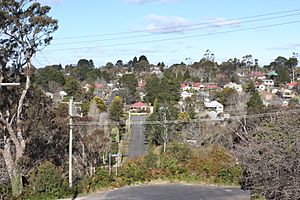 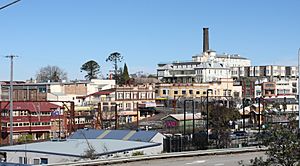 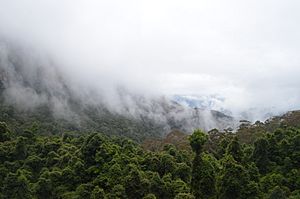 The area's scenery and art-deco style shops and houses attract an alternative subculture. Many poets, artists and environmentalists reside in Katoomba and the Blue Mountains, generally, and the town hosts the Winter Solstice festival, Winter Magic, that features local talent, art and handicraft. The festival was established in 1994 to provide a local focus for the Blue Mountains-wide Yulefest. Yulefest is a long-running tourism initiative that promotes Northern Hemisphere-style Christmas celebrations during the Australian winter months June to August.

Novelist and historian Eleanor Dark (1901–1985) lived in Katoomba with her husband Dr. Eric Dark from 1923 until her death. The couple's home "Varuna" is now a writer's centre. In 1921, production house duo Raymond Longford and Lottie Lyell filmed The Blue Mountains Mystery in part around the town centre. Ursula Dubosarsky's 1991 time-travel novel Zizzy Zing is set in Katoomba in 1938, at the time of the Sesquicentenary.

Blues musician Claude Hay is also a resident of Katoomba, having built his home and recording studio on the outskirts of town. Both of Hay's albums, 2007's Kiss The Sky and 2010s Deep Fried Satisfied were recorded in Katoomba, with the latter earning Hay critical acclaim and a #1 on the Roots Music Report Australian chart and #21 for airplay worldwide in October 2010.

The scenic beauty and tranquillity of Katoomba and the surrounding Blue Mountains area have long made Katoomba a haven for Sydney-siders looking for rest and relaxation. Many celebrities and affluent locals have built or restored houses with magnificent views, especially in Leura, just to the east of Katoomba. As well as attracting a resident artistic community, Katoomba and its environs has also been the inspiration for art and music. For example, Australian artist Peter Kingston, a long time campaigner for the preservation of Sydney's Luna Park, has produced many works inspired by Katoomba and surrounding areas including the etching "Brave and Cruel" which shows a dark figure leaving Leura Railway Station. Another example is The Mexican Spitfires song "Until" which includes lines reflective of the idea of Katoomba as a sanctuary from city life: "In distance I found strength/Katoomba gave me peace of mind."

In addition to its alternative sub-culture, the area is home to a large number of culturally diverse families and has a significant Aboriginal population. Catalina Park, commonly known as the Gully, was declared an Aboriginal Place in May 2002. It is an ecological and culturally sensitive area with a long history of occupation by the Gundungarra and Darug tribes.

Katoomba is the home of local community radio station 89.1 Radio Blue Mountains .The local cinema is called The Edge, located on The Great Western Highway.

There is also a live entertainment scene in Katoomba, with a wide range of music on offer at various venues, and theatre.

Katoomba has a number of significant buildings. The following are all heritage-listed. 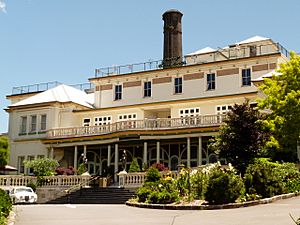 Katoomba was connected to the Main Western railway line in 1874, when the station was called "The Crushers". Katoomba railway station is now served by the Blue Mountains Line.

The Great Western Highway is the main road access route.

Katoomba Airfield is also located about 11.5 kilometres (7.1 mi) by road from the Katoomba Central Business District. The airfield is currently closed to airplanes and helicopters. The site remains available for use by emergency services.

All content from Kiddle encyclopedia articles (including the article images and facts) can be freely used under Attribution-ShareAlike license, unless stated otherwise. Cite this article:
Katoomba, New South Wales Facts for Kids. Kiddle Encyclopedia.