Leura (postcode: 2780) is a suburb in the City of Blue Mountains local government area that is located 100 kilometres (62 mi) west of the Sydney central business district in New South Wales, Australia. It is one of the series of small towns stretched along the Main Western railway line and Great Western Highway that bisects the Blue Mountains National Park. Leura is situated adjacent to Katoomba, the largest centre in the upper mountains, and the two towns merge along Leura's western edge.

The name Leura is supposedly derived from an Aboriginal word meaning "lava". However, this seems unlikely as no volcanoes have erupted in New South Wales for at least 10 million years.

Leura's elevation of 985 metres (3,232 ft) AHD  leads to occasional snowfall in winter and a climate that reflects all four seasons distinctly. At the 2011 census, Leura had a population of 4,365 people.

The village centre lies on Leura Mall which is divided at this point by a wide grassy median strip planted with flowering cherry trees. The historic streetscape has been largely preserved, although there was local concern regarding the development of a shopping complex on the site of a former distribution warehouse. Redesigned to better suit the Leura Mall ambience after consultations with the wider community, the new shopping complex is now complete, hosting a Woolworths supermarket and liquor store. The historic post office building is now home to a news agency. The Alexandra Hotel, not far from the railway station, offers panoramic views from its back veranda. There are a substantial number of restaurants, cafes and coffee shops along Leura Mall, among the boutiques, gift and antique shops.

Leura is home to many formal, English-style, cool-climate gardens, which provide elegant walks and the opportunity to visit when open to the public in early October each year.

In 2016, Leura was named in the list of top 50 most irresistible, exotic, historic and postcard-worthy small towns in Australia. 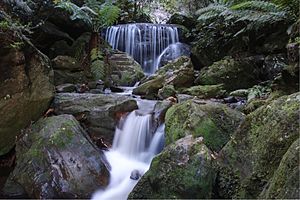 A small waterfall at the Leura Cascades. Rainforest plants here include the Southern Sassafras and the Black Olive Berry, both relics from the age of Gondwana.

One of the most prominent of Leura's historic homes is Leuralla, the former home of Clive Evatt, an Australian politician, barrister and raconteur. Evatt was the brother of H.V. "Doc" Evatt, a former Chief Justice of New South Wales, Leader of the Australian Labor Party, the third President of the United Nations General Assembly, the first Chairman of the United Nations Atomic Energy Commission, and a Justice of the High Court of Australia, and Leuralla contains a memorial to Doc Evatt. The Evatt family still owns and manages the property which is now home to the NSW Toy and Railway Museum.

Another major attraction is the Everglades Gardens, the former home of Belgian-born industrialist Henri van de Velde now administered by the National Trust. The Everglades includes van de Velde's Moderne-style home and 5 hectares (13 acres) of landscaped gardens designed by Danish architect Paul Sorensen. The Everglades has an outdoor theatre which often hosts productions such as Cirquinox and the Leura Shakespeare festival.

Self-styled as "the Garden Village", the Leura Gardens Festival is held annually in October. The Festival is a registered charity and raises money for the Blue Mountains District Anzac Memorial Hospital in Katoomba by opening private gardens to the public. Not connected with the garden festival but also held at the same time is the popular Leura Village Fair.

Natural attractions include Sublime Point to the south, which offers panoramic views of the Jamison Valley, and Leura Cascades in the southwest. There is a network of tracks that goes from Links Road to Echo Point, taking in many attractions along the way, including the Pool of Siloam, Leura Cascades, Leura Falls, Jamison Lookout, Linda Falls and the Dardanelles Pass, before ascending to Echo Point via the Giant Stairway. The area is popular for bushwalking and photography.

All content from Kiddle encyclopedia articles (including the article images and facts) can be freely used under Attribution-ShareAlike license, unless stated otherwise. Cite this article:
Leura, New South Wales Facts for Kids. Kiddle Encyclopedia.