Nepean River (Darug: Yandhai), is a major perennial river, located in the south-west and west of Sydney, New South Wales, Australia. The Nepean River and its associated mouth, the Hawkesbury River, almost encircles the metropolitan region of Sydney.

The headwaters of the Nepean River rise near Robertson, about 100 kilometres (62 mi) south of Sydney and about 15 kilometres (9.3 mi) from the Tasman Sea. The river flows north in an unpopulated water catchment area into Nepean Reservoir, which supplies potable water for Sydney. North of the dam, the river forms the western edge of Sydney, flowing past the town of Camden and the city of Penrith, south of which flowing through the Nepean Gorge. Near Wallacia it is joined by the dammed Warragamba River; and north of Penrith, near Yarramundi, at its confluence with the Grose River, the Nepean becomes the Hawkesbury River.

Changes to the natural flow of the river

The river supplies water to Sydney's five million people as well as supplying agricultural production. This, combined with increased pressures from land use change for urban development, means the river has been suffering significant stress.

There are eleven weirs located on the Nepean River that significantly regulate its natural flow. The river has been segmented into a series of weir lakes rather than a freely flowing river and is also impacted by dams in the Upper Nepean catchment.

The Wallacia Weir was initially built as a wooden weir for the John Blaxland flour mill at Grove Farm. The first Australian fishsteps were built when the current concrete weir was built at the beginning of the Nepean Gorge, an anticendant entrenched meander caused by the slow uplift during the Blue Mountains orogeny carved down through the fifty-million-year-old Hawkesbury sandstone.

In the 1950s the building of the Warragamba Dam across the steep gorge of the Warragamba River, the Nepean’s major tributary, intercepted the flow of the great bulk of its waters and diverted them to meet the needs of the growing Sydney metropolitan area, reducing the river to a shadow of its former self.

These dams and weirs have had a potent effect, blocking migratory native fish like Australian bass (also locally commonly known as perch) from much of their former habitat, and reducing floods and freshets needed for spawning. Nevertheless, the Hawkesbury/Nepean remains an important and popular wild bass fishery.

The luscious banks of the Nepean River provide a natural haven for local flora and fauna and a quiet location for local residents to relax. At Emu Plains, the western bank of the river provides a location for outdoor theatre productions on warm summer nights. The eastern bank at Penrith provides barbecue facilities and children's play equipment, as well as a wide pathway running for several kilometres for strolls along the riverbank. The eastern bank is also the home of the Nepean Rowing Club.

Aboriginal people used the river regularly and their fish traps could be seen at Yarramundi before sand and gravel mining redirected the river. Charles Darwin also wrote of people at Emu Ford, commenting on their skill with spears, while Watkin Tench of the Royal Marines also noted their use of spears, lines and nets to capture fish. The people of the Nepean region also regularly traded with people of the western plains via a route that Bell followed when he laid down an alternate route over the mountains, now called Bells Line of Road.

Near Penrith, since 1971 numerous Aboriginal stone tools were found in Cranebrook Terraces gravel sediments deposited by the Nepean River 40,000 to 50,000 years ago, according to repeated, revised and corroborated radiocarbon and thermoluminescence dating. At first when these results were new they were controversial. More recently in 1987 and 2003 dating of the same sediments strata has revised and corroborated these dates. A great many more artefacts made by people have been found in the region dating back to within the last 5,000 years. Karskens et al. have made an attempt to recover, integrate and map archaeological data of the area from both published and unpublished reports

When the British colony was established at Sydney in 1788, the Governor, Captain Arthur Phillip, charted the coast 50 km north to the mouth of the Hawkesbury and around 32 km upstream till they were stopped by a waterfall, most likely at Hawkesbury Heights. Phillip named the river after Lord Hawkesbury, later titled Charles Jenkinson, 1st Earl of Liverpool, President of the Privy Council Standing Committee on Trade.

Meanwhile, Lieutenant Watkin Tench set off to walk inland, west of Sydney. About 60 kilometres (37 mi) inland, at the foot of the Blue Mountains, he discovered a large river which he named Nepean after Evan Nepean, the Under Secretary of State at the Home Office and a close personal friend of Arthur Phillip. It took about three years to realise that the Nepean flowed into the Hawkesbury.

Nepean river was also one of the pivotal sites of the Hawkesbury and Nepean Wars, a series of civil wars between the Kingdom of Great Britain and the resisting Indigenous clans in the late 1700s and early 1800s.

During the 1820s, the Nepean district's most famous early settler, the landowner and physician Sir John Jamison (1776–1844), erected a Georgian mansion, called Regentville House, on the model estate which he had established on a rise overlooking the river, not far from the present-day city of Penrith. A fire devastated the house in the 1860s. Jamison is considered one of early Australia's most important political and agricultural pioneers.

Despite forming the effective western and south-western boundary of the metropolitan region of Sydney for its entire length, there are very few fixed crossings of the Nepean River. Going upstream, these comprise:

Floods in the Nepean district 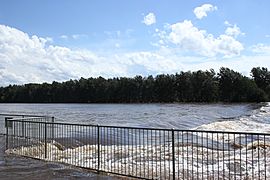 The first flood on record - apparently a small occurrence - was in 1795. Others followed in 1799, March & October 1806 and 1809. In 1810, after a series of major floods on the Hawkesbury, Governor Macquarie proclaimed the ‘Macquarie Towns’ of Windsor, Richmond, Wilberforce, Castlereagh, and Pitt Town in an attempt to ensure that development was restricted to higher ground, free of flooding. The devastation caused by flooding in February, 1817 prompted Governor Macquarie to issue a notice exhorting settlers, in the strongest possible terms, to build their residences above the established flood levels.

The most devastating flood occurred in June 1867 with the Nepean River estimated to have reached 13.4 metres (44 ft) in the river, and 27.47 metres (90.1 ft) AHD. This flood carried away the approaches to the recently built Victoria Bridge. Emu Plains, Castlereagh, and the lower parts of Penrith were all under flood, causing immense loss of property. Many houses were carried into the river by landslides. Many residents were forced to take refuge in public buildings such as the Penrith Hospital and the public schools. A major flood such as that of 1867 would cause inundation of over 16,000 dwellings and damage costing approximately A$1.4 billion.

There have been other notable floods since, particularly that of July 1900 and March 1914. Again there was much flooding of streets and loss of houses and property along the river.

All content from Kiddle encyclopedia articles (including the article images and facts) can be freely used under Attribution-ShareAlike license, unless stated otherwise. Cite this article:
Nepean River Facts for Kids. Kiddle Encyclopedia.