Kids Encyclopedia Facts
Not to be confused with Springwood, Queensland.

Springwood is near the Blue Mountains National Park and the Greater Blue Mountains Area World Heritage Site. It is 371 metres above sea level and, like most of the towns in the vicinity, is located on a narrow ridge between two gorges. Winmalee is to the north. Springwood railway station sits between Valley Heights and Faulconbridge on the Blue Mountains railway line.

The Springwood area was first occupied by the Oryang-Ora aboriginal clan belonging to the wider Darug aboriginal tribe of the wider Sydney region. Their existence in the area dates back to approx 40,000 years of settlement with many rock carvings & art sites in the area. At the time of settlement the Chief of the clan was Oryang Jack who was drawn by French Artist Pellier (Ref Mitchell Library) Oryang-Ora was also the reference to the area that marked the dividing ridge line between the Darug tribes of the north and the Gundungurra tribes to the south in the Blue Mountains area.

In 1815, Governor Lachlan Macquarie and his wife stopped by what Macquarie called a spring. The place was later named Springwood: "Spring" from the springs in the area, and "wood" from the local Mountain Blue Gums (Eucalyptus deanei) of the area. As a town developed, the main street was named Macquarie Road, after Governor Macquarie.

The first railway line was put through the Blue Mountains in 1867, and the Springwood station was built in 1868. This station was replaced by a more substantial building in the Victorian Gothic style, constructed in 1884 under the direction of John Whitton, Chief Engineer of NSW Railways; a porter's cottage was constructed just west of the station. Springwood Station is the second-oldest surviving station in the Blue Mountains. It is listed on the Register of the National Estate as well as having a New South Wales heritage listing.

In 1892, James Hunter Lawson built Braemar, a large, single-storey house situated on a sixty-acre property on Macquarie Road. Braemar started as a family residence, but later became a convalescent home, a boarding house, a private home again and a guesthouse. It was acquired by the Blue Mountains City Council in 1974, restored as a Bicentennial project and reopened in 1988. It serves as a community gallery and centre, staffed by volunteers. The local library is housed in a new building behind Braemar.

Christ Church Anglican Church was built on the Great Western Highway from 1888–89, with extensions in the 1960s and 1980s. It was designed by the architect Sir John Sulman, who had a holiday residence at Lawson. Designed in the Victorian Academic Gothic style, the church is the oldest Anglican church building in the Blue Mountains and is heritage-listed. The house originally built as a vicarage, but only used as a private residence known as Southall, is also heritage-listed. The Presbyterian Church building, a sandstone Gothic building located on Macquarie Road, was built in 1895. The Catholic community was originally part of the Penrith parish, but were given their own building in 1892: St Thomas Aquinas Church. The church has since relocated to St Columba's grounds, Winmalee.

A small part of Springwood, along with larger parts of the adjacent town of Winmalee and nearby village of Yellow Rock were badly affected by bushfires in October 2013. 193 residential properties were destroyed, and 109 damaged in those localities.

Despite its location in the temperate oceanic Blue Mountains region, Springwood has a humid subtropical climate (Cfa). Unlike the upper Blue Mountains area, it generally has mild winters and warm summers. Although Springwood's elevation is at 371 m (1,217 ft), its winter nights are warmer than those of Penrith and Richmond in the lower Sydney metropolitan area, which lie on the footsteps of the Blue Mountains. However, unlike these Sydney suburbs, Springwood has a higher annual rainfall amount. Furthermore, Springwood can suffer bushfire damage during the spring and summer months due to it being located in, and surrounded by, a predominant eucalyptus woodland area which encompass the Blue Mountains region.

Springwood is also the site of a notable ANZAC Day Parade.

The Blue Mountains Vietnam Veterans' Association conducts the largest annual parade and Memorial Service for Vietnam veterans in Australasia at Springwood, on the third Sunday of August, to coincide with the anniversary of the Battle of Long Tan.

Springwood Springtopia Festival is held on the first Saturday of September with a similar format to Australia Day. 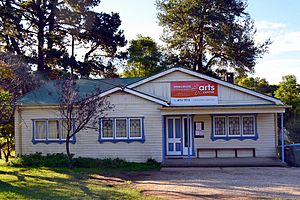 Springwood has some parklands with bushwalks often leading into wilderness areas. Fairy Dell is located immediately south of the township and has some tracks leading into the Blue Mountains World Heritage area. The Deanei Reserve is another bushland area which is located east of the township and hosts the threatened and endangered Blue Mountains Shalecap Forest. There are also bushland walks in this bushland Reserve.

Buttenshaw Park is also a recreational area which hosts an arboretum, play structures and the Springwood Pool.

Summerhayes Park is a public reserve located in Winmalee, which is used for sport and recreational activities. Its facilities include tennis and netball courts, a newly built skate park and fields for Football (soccer) both local (NDSFA) and Representative (FNSW) all year round. It is the home of Springwood United Football Club (formerly Springwood Soccer & Sports Club) [8] and Springwood Netball Club. Summerhayes Park has diverse native flora and fauna and contains many threatened/endangered species and ecological communities. It is also a bushwalking area with many tracks, vistas and aboriginal archeological sites. 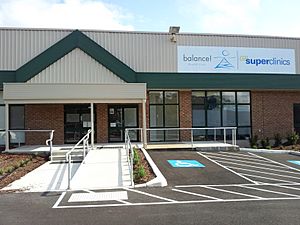 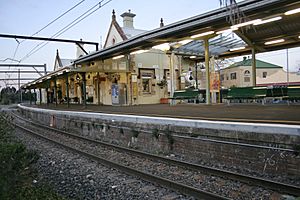 Notable people from or who have lived in Springwood include:

All content from Kiddle encyclopedia articles (including the article images and facts) can be freely used under Attribution-ShareAlike license, unless stated otherwise. Cite this article:
Springwood, New South Wales Facts for Kids. Kiddle Encyclopedia.