Faulconbridge is a village located in the Blue Mountains 77 km west of Sydney, New South Wales and is 450 metres above sea level. At the 2016 census, Faulconbridge had a population of 4,025 people.

The area around Faulconbridge was first explored by Blaxland, Wentworth and Lawson in May 1813 while they were camped at Springwood and looking for a route which would take them over the mountains. It was settled in the 1870s after the railway line had opened the mountains up.

One of the earliest residents was the "Father of Federation", Sir Henry Parkes, who moved to the area in 1877 and purchased 600 acres (2.4 km²). It is said that the original railway platform at Faulconbridge was specifically built to serve his residence, which was known as Faulconbridge House. The town was named after Parkes's home. Faulconbridge was the maiden name of Parkes's mother, while a small waterfall in the area — Clarinda Falls — was named after his first wife, Clarinda Varney (the Varney name was passed on to Parkes's son, Varney Parkes). Parkes is buried in Faulconbridge Cemetery, alongside the grave of his first wife, Varney Parkes and other family members. The railing surrounding his grave bears a plaque which describes his role in Australian history:

On Sir Henry's Parade (which runs between Springwood and Faulconbridge on the southern side of both the railway line and the highway) is Jackson Park, which is home to the Prime Ministers' Corridor of Oaks. Joseph Jackson, a NSW Member of Parliament, gave the park to the local council in 1933 with the explicit intention of having every Prime Minister of Australia, or a nearest surviving relative, plant an oak tree. Jackson was a huge admirer of Henry Parkes and believed that his Corridor of Oaks was a suitable monument to the man most responsible for the federation of Australian states. It is worth noting that every Prime Minister since Gough Whitlam has had their tree destroyed soon after planting, and the trees representing these Prime Ministers were re-planted later. 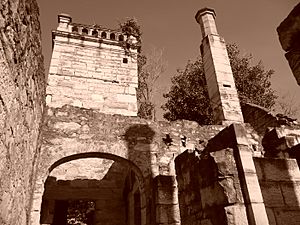 Faulconbridge is well known for having been the home of artist Norman Lindsay. Some streets have been given names from some of the characters out of Lindsay's famous children's book The Magic Pudding. These include Bill Barnacle Avenue, Watkin Wombat Way and more. The house Norman Lindsay used to live in is at the end of Chapman Parade and has been turned into a gallery owned by the National Trust of Australia.

A number of Aboriginal carvings are also to be found on the rock shelves in the area.

The most prominent landmark in the area is the ruined house called Eurama, two kilometres west of Faulconbridge station. This substantial stone house with Tudor chimneys was built in 1881 by the stonemason Paddy Ryan, for Mr Andrew McCulloch. The property was substantial enough, or the owner had enough influence, to even warrant its own platform on the nearby railway line, Numantia. At first it was called Weemala, but the name was changed to Eurama by later owners. It was unused for some time until being restored by a new owner, but was then destroyed by bushfires in 1968. The region was again under threat during the 2013 New South Wales bushfires.

All content from Kiddle encyclopedia articles (including the article images and facts) can be freely used under Attribution-ShareAlike license, unless stated otherwise. Cite this article:
Faulconbridge, New South Wales Facts for Kids. Kiddle Encyclopedia.