Division of Lindsay facts for kids 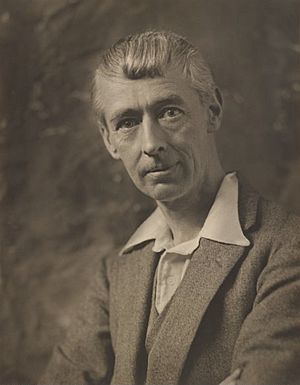 The Division of Lindsay is an Australian Electoral Division in the state of New South Wales. It was set up in 1984 and is named after Sir Norman Lindsay, the Australian artist, writer and sculptor.

Since it was set up in 1984, its winning member of parliament has been from the party winning government.

Jackie Kelly won the seat during the 1996 election. Her win was challenged in the Court of Disputed Returns because she was still a citizen of New Zealand, and she worked as a legal officer for the Royal Australian Air Force. The Australian Constitution (Section 44) does not allow people who are citizens of another country, or people who are employed by the government to be members of Parliament. A by-election was held, and Kelly who had given up her New Zealand citizenship, and resigned from her airforce job was elected again.

In 2007 Kelly was again in trouble. Three days before the election her supporters, including her husband, were caught in Lindsay putting fake letters in peoples' letterboxes. These letters linked the Labor Party to Islamic terrorism.

David Bradbury had served as the Mayor of Penrith. Every member of Lindsay to date, except Scott, has served as a minister.

All content from Kiddle encyclopedia articles (including the article images and facts) can be freely used under Attribution-ShareAlike license, unless stated otherwise. Cite this article:
Division of Lindsay Facts for Kids. Kiddle Encyclopedia.