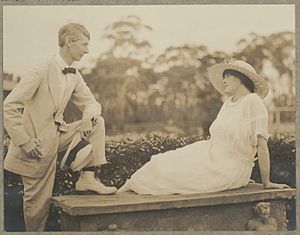 Lindsay married Catherine (Kate) Agatha Parkinson, in Melbourne on 23 May 1900. Their son Jack was born in Melbourne on 20 October 1900, followed by Raymond in 1903 and Philip in 1906. They divorced in 1918. He later married Rose Soady who was also his business manager, a most recognizable model, and the printer for most of his etchings. They had two daughters: Jane Lindsay, born in 1920, and Helen Lindsay, born in 1921. Philip died in 1958 and Raymond in 1960. In the Lindsay tradition, Jack became a prolific publisher, writer, translator and activist. Philip also became a writer of historical novels, and worked for the film industry. 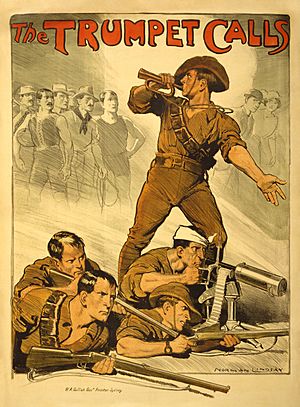 In 1895, Lindsay moved to Melbourne to work on a local magazine with his older brother Lionel. His Melbourne experiences are described in Rooms and Houses.

In 1901, he and Lionel joined the staff of the Sydney Bulletin, a weekly newspaper, magazine and review. His association there would last fifty years.

Lindsay travelled to Europe in 1909, Rose followed later. In Naples he began 100 pen-and-ink illustrations for Petronius' Satyricon. Visits to the then South Kensington Museum where he made sketches of model ships in the Museum's collection stimulated a lifelong interest in ship models. The Lindsays returned to Australia in 1911. 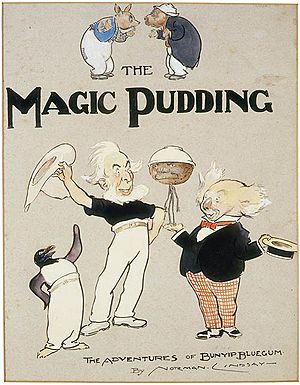 Lindsay wrote the children's classic The Magic Pudding which was published in 1918.

A large body of his work is housed in his former home at Faulconbridge, New South Wales, now the Norman Lindsay Gallery and Museum, and many works reside in private and corporate collections. His art continues to climb in value today. In 2002, a record price was attained for his oil painting Spring's Innocence, which sold to the National Gallery of Victoria for A$333,900.

All content from Kiddle encyclopedia articles (including the article images and facts) can be freely used under Attribution-ShareAlike license, unless stated otherwise. Cite this article:
Norman Lindsay Facts for Kids. Kiddle Encyclopedia.