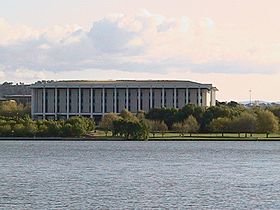 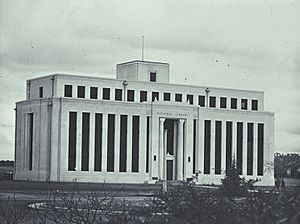 The original National Library building on Kings Avenue, Canberra, was designed by Edward Henderson. Originally intended to be several wings, only one wing was completed and was demolished in 1968. Now the site of the Edmund Barton Building.

The Library Committee is keeping before it the ideal of building up, for the time when Parliament shall be established in the Federal Capital, a great Public Library on the lines of the world-famed Library of Congress at Washington; such a library, indeed, as shall be worthy of the Australian Nation; the home of the literature, not of a State, or of a period, but of the world, and of all time.

The present library building was opened in 1968. The building was designed by the architectural firm of Bunning and Madden. The foyer is decorated in marble, with stained-glass windows by Leonard French and three tapestries by Mathieu Matégot.

In 2012–2013 the Library collection comprised 6,496,772 items, with an estimated additional 2,325,900 items held in the manuscripts collection. The Library's collections of Australiana have developed into the nation's single most important resource of materials recording the Australian cultural heritage. Australian writers, editors and illustrators are actively sought and well represented—whether published in Australia or overseas.

Approximately 92.1% of the Library's collection has been catalogued and is discoverable through the online catalogue.

The Library has digitized over 174,000 items from its collection (the 100,000th being http://nla.gov.au/nla.pic-vn3409117) and, where possible, delivers these directly across the Internet. The Library is a world leader in digital preservation techniques, and maintains an Internet-accessible archive of selected Australian websites called the Pandora Archive.

The Library collects material produced by Australians, for Australians or about the Australian experience in all formats—not just printed works—books, serials, newspapers, maps, posters, music and printed ephemera—but also online publications and unpublished material such as manuscripts, pictures and oral histories. A core Australiana collection is that of John A. Ferguson. The Library has particular collection strengths in the performing arts, including dance.

The Library's considerable collections of general overseas and rare book materials, as well as world-class Asian and Pacific collections which augment the Australiana collections. The print collections are further supported by extensive microform holdings.

The Library houses the largest and most actively developing research resource on Asia in Australia, and the largest Asian language collections in the Southern hemisphere, with over half a million volumes in the collection, as well as extensive online and electronic resources. The Library collects resources about all Asian countries in Western languages extensively, and resources in the following Asian languages: Burmese, Chinese, Persian, Indonesian, Japanese, Khmer, Korean, Lao, Manchu, Mongolian, Thai, Timorese, and Vietnamese.

The Library has acquired a number of important Western and Asian language scholarly collections from researchers and bibliophiles. These collections include:

The Asian Collections are searchable via the National Library's catalogue.

The Australian manuscript collections date from the period of maritime exploration and settlement in the 18th century until the present, with the greatest area of strength dating from the 1890s onwards. The collection includes a large number of outstanding single items, such as the 14th century Chertsey Cartulary, the journal of James Cook on the HM Bark Endeavour, inscribed on the Memory of the World Register in 2001, the diaries of Robert O'Hara Burke and William John Wills from the Burke and Wills expedition, and Charles Kingsford Smith's and Charles Ulm's log of the Southern Cross.

The National Library's Pictures collection focuses on Australian people, places and events, from European exploration of the South Pacific to contemporary events. Art works and photographs are acquired primarily for their informational value, and for their importance as historical documents.

The large National Library building is home to various reading rooms and collections. On the ground floor is the Main Reading Room — this is where the bulk of the Library's Internet access terminals are located, and where wireless internet access is available. Services are also delivered on-site from the Newspaper & Family History zone on the ground floor, Special Collections Reading Room on the 1st floor, and Asian Collections on level 3.

The National Library of Australia provides a national leadership role in developing and managing collaborative online services with the Australian library community, making it easier for users to find and access information resources at the national level.

The National Library of Australia maintains a catalogue of the resources in its own collection which are available to the general public.

Trove is an online library database aggregator, a centralised national service built with the collaboration of major libraries of Australia. Trove's most well known feature is the digitised collection of Australian newspapers. By June 2013 over 10 million digitised pages, or 100 million articles were accessible through Trove. Many of the NLA's resource discovery services have been fully integrated with Trove—meaning that several (such as "music Australia", "pictures Australia" and "Australian newspapers") are now accessible only through the site. Others (such as PANDORA and the ANBD) use Trove as their primary means of public access. The service is able locate resources about Australia and Australians, which reaches many locations otherwise unavailable to external search engines.

All content from Kiddle encyclopedia articles (including the article images and facts) can be freely used under Attribution-ShareAlike license, unless stated otherwise. Cite this article:
National Library of Australia Facts for Kids. Kiddle Encyclopedia.