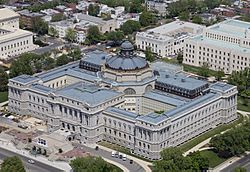 the main building of the Library of Congress in Washington D.C. served a national library

A national library is a library that is established to serve a country or a nation. Sometimes national libraries are dedicated to one subject and sometimes they are divided into several buildings.

Listed according to the alphabetical order of the countries, the national libraries are located in:

All content from Kiddle encyclopedia articles (including the article images and facts) can be freely used under Attribution-ShareAlike license, unless stated otherwise. Cite this article:
National library Facts for Kids. Kiddle Encyclopedia.